THE LOWDOWN
Following on from the international break, Arsenal Women are on the home straight and focused on the title. If they win their next 5 games, they will be crowned champions ahead of Manchester City’s visit to Meadow Park on the final day. But Montemurro’s squad must take one game at a time and they start with the visit of Bristol City to Boreham Wood on Thursday evening.

Bristol have improved this season under the stewardship of Australian manager Tanya Oxtoby. They held Manchester City and Chelsea in the league earlier this season, though their form has tailed off in the second half of the season, they’ve not scored in their last three games, in a home draw with Brighton, a 2-0 defeat at Durham in the FA Cup and they were thrashed 6-0 away at Chelsea last time out.

The Gunners are still nursing a sizeable injury list and counting the emotional cost of losing the Conti Cup Final on penalties to Manchester City the last time they played. Since then, most of the squad have been away with their countries, with Beth Mead and Leah Williamson’s spirits lifted by helping England to win the She Believes Cup in the US.

Arsenal have not recaptured their early season form since the injury to Jordan Nobbs in November, but they have done enough to keep themselves in the box seat in the title race, albeit they will kick off against Bristol with 3 games in hand over leaders Manchester City, which brings its own pressures. The hunt is on.

TEAM NEWS
Arsenal have lost Danish winger Katrine Veje, who left Bramall Lane on crutches with a suspected fracture in her leg sustained in the Conti Cup Final. Viki Schnaderbeck, Danielle Carter, Jess Samuelsson and Tabea Kemme have all stepped up their recoveries from long term knee injuries, but won’t be ready for this game.

Emma Mitchell is also unlikely to be fit. Jordan Nobbs is out until September, while Lia Wälti is also still sidelined with a knee ligament injury. Leah Williamson picked up a small knock on international duty, but was fit enough to play for England against Japan last week. Vivianne Miedema should be fit after a slight leg injury kept her on the bench in the Conti Cup Final.

LAST TIME OUT
The Gunners despatched Bristol 4-0 at Stoke Gifford back in October, thanks to a double from Vivianne Miedema and goals from Jordan Nobbs and Danielle van de Donk. In this fixture last season, the Gunners struggled to a 1-1 draw after Lauren Hemp opened the scoring for the visitors, prior to Danielle van de Donk’s equaliser. It proved to be manager Pedro Losa’s final game in charge of the Gunners.

PLAYER TO WATCH
Forward Beth Mead has had her least prolific season as a professional in front of goal this season, but has assumed a valuable creative role and leads the WSL for assists. But it was clear her confidence in front of goal had begun to suffer, missing a clutch of presentable chances in the 3-0 FA Cup defeat to Chelsea recently.

Mead scored a sumptuous chip in the home match against Yeovil, her first goal in over three months. Immediately she looked revitalised, winning a penalty minutes after that strike following a mazy, 30 yard run into the Glovers’ box. Mead scored a sensational long-range winner against Brazil in the She Believes Cup and followed it up by scoring against Japan in the final.

Beth made her name as a goalscorer and scoring a clutch of impressive finishes of late hopefully signals a return to scoring form at the right time. With the likes of Nobbs and Carter unavailable, an extra goalscorer is needed for Arsenal. With a renewed confidence in the area, Mead could be a crucial player for the run-in. 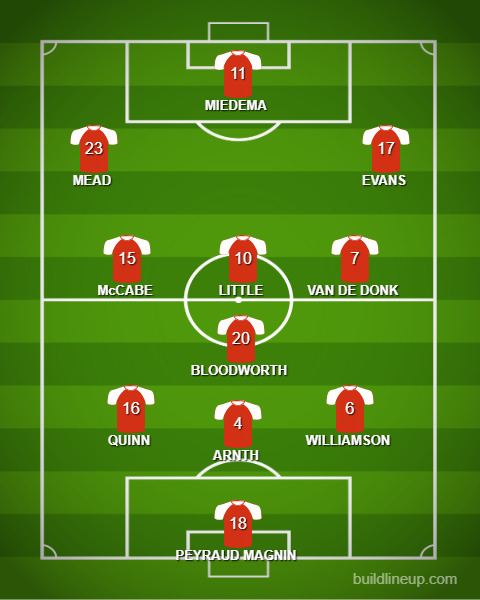 HOW TO CATCH THE GAME
The match kicks off at 7.30pm on Thursday evening at Boreham Wood’s Meadow Park. Tickets are £10 adults and £6 for concessions on the gate. The match is also being streamed live on the WSL Facebook page.

Come on you Gunners! We’ve fallen at the last hurdle with regards trophies this season but this one is in reach!

I cannot believe our injury list. But I know the girls will get there.