THE LOWDOWN
The Gunners travel to Solihull to take on a mean, determined Birmingham side in the WSL on Sunday. If Montemurro’s side emerge from the Midlands with 3 points, their chances of winning the league title will sky rocket into near certain territory. Fail to win and the prospect of a nerve shredding final day title shootout against Manchester City becomes significantly likely.

Birmingham are an incredibly hard working, organised team who enjoy locking horns with the WSL’s top brass. This is illustrated by their recent results, where they have fallen to surprise defeats to the likes of Brighton and Bristol City, as well as a less surprising defeat to Reading. But they snatched a 3-2 win away at Chelsea recently. They have only lost to Manchester City by the odd goal in both encounters with Nick Cushing’s side this season. Arsenal haven’t won away at Birmingham in 90 minutes since 2015.

? @MartaTejedor looks ahead to Sunday's @FAWSL clash with @ArsenalWFC which will be her first home game as Blues boss.

This will be Birmingham’s first home match under new boss Marta Tejedor. Arsenal have begun to show signs of their early season fluidity in resounding wins over Bristol City and Liverpool. They will know that if they can clear this hurdle, with games against Everton and Brighton on the horizon, they will move from favourites to ‘some bookies are paying out’ territory when it comes to winning their first league title since 2012.

FOR MORE ON THE OPPOSITION…

PODCAST: For the first time since January we're heading home to Damson Park. We discuss Sunday's game against Arsenal as well as catching up on what's been going on this past month.https://t.co/O5wAgdHruq

TEAM NEWS
Tabea Kemme should return to the matchday squad after a long term knee injury. Kemme tore her meniscus last spring and returned briefly in January, before suffering a setback. She wasn’t named in the squad for the Liverpool game last Sunday, but travelled with the team and warmed up with them. Viki Schnaderbeck and Dan Carter will join her on the bench.

Swedish right-back Jess Samuelsson has left the club after her own injury issues, having broken her foot twice in the last 16 months. Jess returns to Sweden in search of regular playing time ahead of this summer’s World Cup. Emma Mitchell (ankle), Jordan Nobbs (knee) and Lia Wälti (knee) all miss out.

LAST TIME OUT
Arsenal defeated the Blues 3-1 in a tight league encounter at Boreham Wood in November, with two goals from Jordan Nobbs and a Danielle van de Donk penalty. In the Conti Cup, the Gunners trailed to a Lucy Quinn goal, before van de Donk headed home a late equaliser. Vivianne Miedema piled on the heartbreak for the away side with a stoppage time winner. In this fixture last season though, Birmingham won 3-0 thanks to an Ellen White hat-trick.

PLAYER TO WATCH
Birmingham have given the Gunners two very tough matches already this season, but on both occasions, the Blues did not have former Arsenal striker Ellen White available. White has scored 5 goals in her last two matches against her former employers. Stopping her will be absolutely crucial to Arsenal’s chances of three points. Birmingham don’t give much away, so going a goal behind would leave Montemurro’s side in a sticky situation.

Therefore, Leah Williamson and Louise Quinn will have to be on their game to nullify the threat of White on the counter. White is excellent at exploiting spaces in behind centre halves and running the channels. She has become far more clinical in her finishing since leaving North London too. The performance of Arsenal’s centre-back pairing will need to be excellent on Sunday. 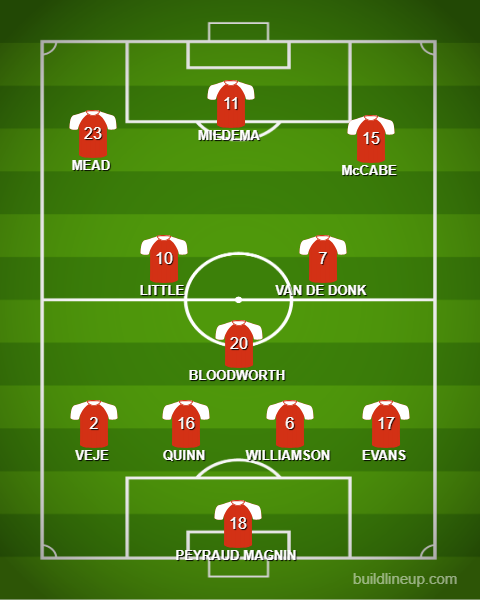 HOW TO CATCH THE GAME
The match takes place at Solihull Moors’ Damson Park ground on Sunday, with kickoff at 1230pm. Tickets are £7 adults and £4 concessions. The game is also being screened live on the BBC Red Button and BBC Online.

COMING UP
Why not check out this month’s Arsenal Women Arsecast, in which I talk to Suzy Wrack about the recent Barclays sponsorship deal with the WSL and what English clubs can learn from recent record crowds at Juve and Atletico Madrid. We will also have exclusive player reaction on the site immediately after the game on Sunday and the usual Weekly Round Up on Monday.

Let’s not take 6 points for granted from Everton and Brighton just yet remember we drew 0-0 with Yeovil last season which cost us CL football.
Just stand firm at the back and let Vivianne and Meado win the game for 3 points this Sunday. Oh and if DvD wants to chip in another hatrick to celebrate her new contract that will be great!

I agree about counting chickens but I think we are a better outfit this season than last. Almost the exact same squad but a whole season of Montemurro in charge there are some players who have blossomed. I’m cautiously optimistic. Cautiously mind.
Meado is playing with confidence again and bagging goals, not to mention she’s the leading assist maker in the league.

These girls have the spirit of the ‘Invincibles’. After today’s grafted “1-0 to the Arsenal” against a robust Brum outfit the title looks to be heading home. It would be nice to go in to the City game already holding the trophy. On the other hand the adrenaline rush of an ’89 event would be great for women’s football.

I’d much prefer to be holding the trophy before City arrive for the final game of the season!