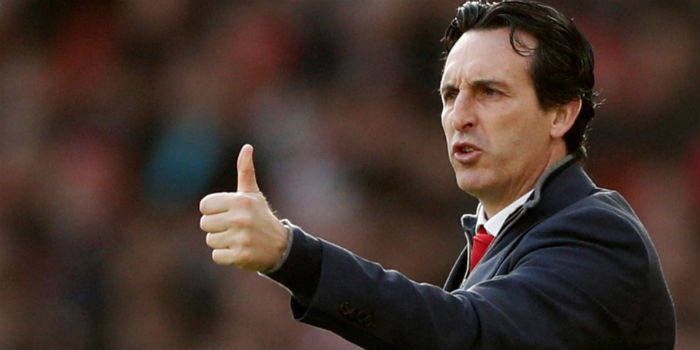 Unai Emery says he wants only positive energy from his players as he looks to rescue a frustrating week with a big result against Manchester United at the Emirates.

Having watched his side squander a chance to beat Sp*rs in the North London derby on Sunday and then seen them self-destruct on Thursday against Rennes in the Europa League, the Spaniard is well aware his club’s chances of qualifying for the Champions League are hanging by a thread.

A win against Ole Gunnar Solksjaer’s in-form outfit would provide a timely welcome boost ahead of the return leg against Rennes, especially with Sp*rs losing today and the gap to third potentially slimming to a point.

“This morning I was speaking with some players,” Emery told press on Friday.

“I want the players to help me with big positive energy. One player was worse than me, more down than me, and I said to him ‘let’s speak tomorrow as you are more sad than me’.

“I want to listen to players with positive energy. I want to hear them say: ‘We can do it on Sunday.’”

Defeat tomorrow and failure to overturn a 3-1 deficit in the Europa League would cast a long, dark shadow over the rest of the season. Emery knows a tough few days lie ahead.

“Our target is to play in the Champions League and we know it is not easy,” said Emery.

“We have two possibilities even if we know it is going to be difficult. With this responsibility the players are optimists. We can come with positive spirit and do it. I want to find positive energy.”

Of the threat posed by United, who have spun a remarkable run of results together since sacking Jose Mourinho, Emery added: “We know United are doing very well. The most important is our capacity to react [to the Rennes defeat]. First, it will be mostly our supporters and stadium, creating together a big atmosphere.”

“One player was worse than me, more down than me, and I said to him ‘let’s speak tomorrow as you are more sad than me”
classic arseblog joke, always puts in some quotes where u ask yourself for a sec(when u are bit slow like me) if it’s true or not.
Is that an upcomig excuse not to play Özil despite good perfomances?! Please the fuck not!
At home we have to do this, with all belief. They are by far not as good as they seem and we can certainly do better! COYG!!!

Look at the quotes is this article: https://www.theguardian.com/football/2019/mar/09/unai-emery-arsenal-stop-moping-manchester-united

“He shakes his fist for emphasis.”
im dying.
u left that one out, huh blogs?! XD

Arsenal issues shouldn’t be about Ozil all the time.

I know I know and usually im the one who is stating that. no excuse, youre right.

I have a feeling this person is Auba.

Hard to get excited about this game as I’m riddled with uncertainty. Which arsenal will turn up? Will we be up for it and give them hell all over the pitch or will we be timid and get caught on the break.or fall to a self inflicted mistake. I so want us to stuff them with a big massive performance…but..no no just try to stay positive. Coyg

Unlike the previous years, this year we have always turned up for the big matches. All of them. Different matter we haven’t had the results we wanted, due to different reasons.

We turned up but they were better! I was rewatching some of that game yesterday…we couldn’t match their intensity and didn’t have the final ball when we did get into their box!

Sooner or later the Norwegian will be bound to lose his first epl game.Why not at the ES?To do that every gunner repeat every gunner must run/fight for the ball and chase and harass the rd in possession like relegation threatened sides. BHA have also beaten CP with a well taken winning goal. How?With the defender backtracking and one on one the seagull shot instead of passing. Arsenal shd have our guys running at defences . The speed of the mu attack is a menace.Its crucial none of the mu players are one to one with our defenders. That will… Read more »

I am afraid that relegation threatened sides have to do that to make up for a lack of ability, inferior tactical intelligence, lack of game management and lack of variety in attacking approach. I fear Arsene’s tenure has turned people off of the qualities of technique, playmaking ability, possession and fluidity in attack. We have been so hurt while prioritizing those aspects that people have forgotten their benefits and how to succeed, they are a requirement and not a luxury. We have fans clamouring for more running, more underdog football but it’s not possible when you are better than 14… Read more »

Best result we can get is a draw. I really can’t see is winning this one. Man Utd seem hungry and up for a fight every game. We seem to try and find a way to sabotage our team every time we play. We need to be 100% focused and stop giving teams fking clumsy penalties and get silly red cards.

I checked the rules. I am pretty sure the best result we can get is a win.
COYG!

Before Spuds, I’d hoped for 4 points from these two games so that’s still on.

(I also wanted a good result in France but that can wait till the return leg I guess!)

This game feels like a cup final and Manure’s run sickens me, so let’s stuff ’em.

2 points from the two games is the best we can do.

Trust me, there will be some type of help for Manu in this game.
To win, we have to be extra brilliant, not just because its the “poster boys of UK” but because they will have an extra man. Nothing has changed.

I’ve got a feeling we’ll take points of United.

Our home record in the Premier League is excellent with only City beating us; I can can see us continuing with this form. United have had the luck that we did earlier in the season in maintaining this unbeaten run. It could well end today.

If we do lose then that’s probably it as far as top-four goes. Then we’ll need a massive comeback in mid-week to keep us in the EL.

Your new found positivity is appealing. I hope you are right.

I can’t believe we are all (although clearly I’m not) going with the narrative that if we don’t win today that top 4 is over…as long as we have more games to play then it’s not over till the ref blows his whistle on the last day of the season.

This is a season defining two games ahead of us. I hope we can get the results to save our season, because the performances say we are more or less where we deserve to be.

This is a must win game for both sides but is pretty much make or break for us. We have to get back on track and this represents our opportunity to ramp up the pressure on the other top 4 competitors, especially with Sp*rs currently leaking points like an incontinent rectum.

Let's Give Emery a chance

Who thinks top 4 is finished if we lose today and Chelsea win?

Difficult but it wouldn’t be over.
Sp*rs are in free fall. Even if Manu take 3rd Chelsea are erratic and still have to play Liverpool and ManU in the run in. After today we don’t face another top 6 team.

I think if we lose it will depend on the manner of defeat and the kind of performance as to how I would feel about top 4 going forward. However, I’ve already just said that I don’t see a loss today as top 4 being over…there will be many twists and turns for sure. We can’t guarantee top 4 even if we do beat Man Utd today because there is no given with the other matches we have to play. The complacency of assuming you can walk over a “smaller” team is what has done for us almost every time… Read more »

If we’re honest, we’ve been a bit shit, the fact that we’re still in with a shout at top four says plenty about the quality of the teams below us, three points today, and looking at our run in, I think we’d have half a chance, I want to believe, but it’s hard sometimes (ps, was just watching highlights of the “Invincibles”, how far we’ve fallen)

Which Invincibles, the highlights package or the boring bits in between? I’m sick of the Invincibles and prefer living in the here and now. We have a good team who are capable of beating anybody on their day, hopefully the manager sets up a balanced side and we take our chances. COYG!

In the Arsene era we would have lost this game. I wonder if it will be the same. Here’s hoping for a Kolasinac shoulder barge. I hope Auba scores.

Agree with para about the extra help. You don’t have to be racket analyst,sorry,scientist,to see how some refs have cocked up.
Until the FA takes draconian action against such erra nt mo,it will be business as usual meaning Arsenal will get hurt more.