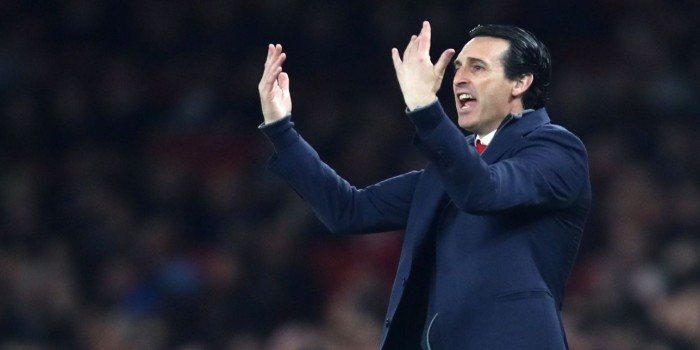 Unai Emery says fatigue will not be an excuse as his Arsenal prepare to take on French side Rennes in the first leg of our last 16 tie.

Despite a physically and emotionally draining North London derby on Saturday, the Spaniard has picked a strong squad to Brittany, weakened only by the absence of the suspended Alex Lacazette and three players with long-term injuries.

In contrast to the Gunners, Rennes have had eight days to prepare for tomorrow’s clash having had their Ligue 1 clash with Nimes, scheduled for the weekend, deliberately postponed by the League de Football Professionnel.

“It’s not an excuse for us,” Emery told his pre-game press conference on Wednesday evening. “We have the habit to play a lot of matches week by week.

“We rested on Sunday. We’re starting to work Monday, Tuesday and Wednesday.

“Tomorrow we will be ok to play every player. For us it’s a very important match to think what we need to do individually and collectively.”

Earlier this week, Sp*rs boss Mauricio Pochettino cited the treatment of Rennes as an example for the Premier League. The Argentine was having a moan about the fact his players, who faced Borussia Dortmund last night, hadn’t had time to train in Germany. Chelsea’s Maurizio Sarri has had similar things to say in the past.

Asked about the comments of his Premier League peers, Emery said, “My opinion is the same. I respect them.

“The Premier League decided the schedule for our matches. We adapted. Our adaptation is preparing the matches with the days we can have. Our habit is to play a lot of matches in the week.

“We have players to share and find combinations with the players who can play tomorrow with big performances.”

It’s a big week for Arsenal. On returning from France we’ll immediately turn our attention to Sunday’s game with Manchester United, a clash that could have a big impact on our top four chances.

Will be really interesting to see who is picked for tomorrow. Have to think he’ll rotate heavily, but the argument could also be made for a full strength side. The second we think we’ll stroll past Rennes is when we’ll get “Ajax’d”

To be fair to Emery, he has called upon the length and breath of the squad, even Mediocre Elneny and Jenkinson have had feature, mostly for lack of otherwise.

Hope to see AMN back at Rback against Rennes.

We are up.against it this weekend.

United are going to be brimming with confidence having dumped out PSG.

They won’t have any time for fatique.

And lest we forget OGS is the injury time specialist.

Nothing shy of a superb performance and 110% concentration till final whistle will do.

His English is getting so good and it’s easier to understand exactly what he is saying now. I’m loving what he says and the person he is following his last few interviews/pressers…

Me too it’s becoming clearer

Agree that it’s no excuse, but, damn, other leagues sure do seem to care more about their teams and fans than the FA/PL do.

Emery never rotates as much as you might think and surely this is an important game to keep momentum going.

The biggest discovery from the last game was not playing to wingers on either side. How many times have we been unpicked while both fullbacks are in the opposition half!