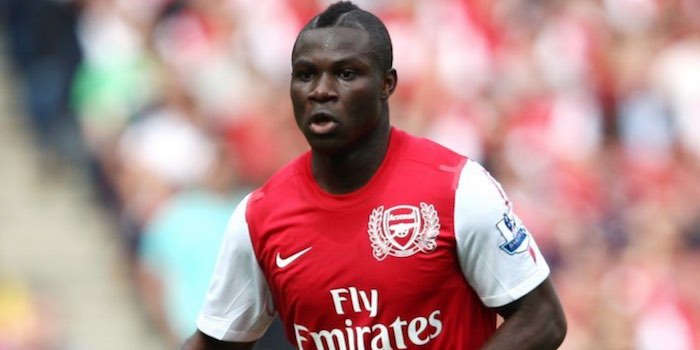 Emmanuel Frimpong announced his retirement this week, and, while it isn’t exactly a case of what could have been, it was still disappointing news.

Frimpong’s Arsenal career may have long since been over – he left the club in January 2014 – but it was hoped that he could at least prosper elsewhere in some capacity.

Injuries have always been a recurring theme during Frimpong’s Arsenal career, with the midfielder having missed the conclusion of the U18s’ double winning campaign a decade ago due to a knee problem.

It was a knee injury that caused Frimpong to end his career, while some may well point to his social media activity as a factor behind him not making the most of his ability.

There was a time when Frimpong was considered to be one of Arsenal’s brightest prospects with his ability to break up play with crunching challenges and play short, snappy passes.

That earned him 16 first-team appearances, but a long-term breakthrough proved beyond him, despite an encouraging loan spell at Wolverhampton Wanderers.

The wider concern is that so many of Arsenal’s previous crop of talented youngsters have failed to make a major impact elsewhere.

Jay Emmanuel-Thomas is at PTT Rayong, Sanchez Watt is playing for Hemel Hempstead Town and Conor Henderson is at Dunarea Calarasi, while Frimpong is retired. If you had been told that ten years ago then you would have been quite surprised.

All of this demonstrates just how difficult it is for youngsters to make the grade at Arsenal or indeed elsewhere.

It is one thing to excel at youth level and then reach the periphery of the first-team squad, as Eddie Nketiah has done, but making that next step is extremely challenging.

Even if you do make it to the top then injuries are still capable of stopping you in your tracks .

There does seem to be a drop in the overall quality of our prospects in the last ten years, very few go on to make a real name for themselves let alone with us.
Here’s hoping for the current batch to buck the trend

It’s not just us. It’s difficult to make it to the top level. England is just beginning to reap the benefits of 25 years of a comprehensive youth development program. Germany and Spain will struggle to replace their World Cup winning squads. It’s not easy to develop players

Many are called. Few are chosen! Apart from injuries, It seems to me that clubs should have an incentive to increase the success rate amoung trainees, simply based on the money they invest in the players. Add to that, there should some kind of incentive to help players have career in football after spending 10 year apprenticeships at any big club, not just Arsenal. There are a few older apprentices who have not played any competitive football in the past few years and will be released in the next few years with no option but starting over in non league… Read more »

On youtube there are plenty of ordinary guys who are much more technical than professional players. The Harlem Globetrotters do not play in NBA yet they are even more impressive. Clubs bring these boys to academy based on skills with the ball but success is about being able to be effective on the pitch. I think other coaches would have released Iwobi but he met with Wenger. Coquelin had that chance as well.

I think another factor notorious for arsenal as that we developed players that could only play “the arsenal way”. Lower leagues weren’t a good fit for them, but few would go abroad until it was too late.

Here’s hoping that more and more players look to Germany or Belgium once they leave arsenal, rather than lower U.K. leagues.

Good point, the only problem is that Belgium and Germany develop a lot of players already.

I see the clubs’ young setups as a venture capital firm: you invest in 20-30 players throughout the young sides knowing only few (or very few) will make the grade, and those will pay off all the investment made.

Don’t get me wrong, but sometimes it’s more business than human side, although some clubs today are paying more attention to the latter (eg. Sporting Lisbon, Athletic Bilbao and Anderletch).

The great irony of this model is that it’s commonlt criticised that the current VC model is utterly broken for the reasons above.

And now many newer VCs model themselves on more frequent “decent level” (10+% success rate) rather than the “unicornism” of that 1% to prop the entire fund.

Maybe Arsenal should do the same.

@JeorgeBird
Just wondering, do clubs (ours in particular) do enough to prepare young footballers for a life outside of football? It’s a shame so many fail to make the grade, but surely there’s an acceptance of that inevitability, or is it more of a case of only allowing them to think of making the first-team as not to cloud their focus? Obviously both points have their flaws, it’s just the latter could damage them well beyond their professional aspirations. I just hope the club(s) prioritise the human side over the business potential.

Hantal
Reply to  Leno me, I’ll be your friend

This is a difficult thing. Parents say to these kids : We want you to do what makes you happy. Literature and maths aren’t part of what makes them happy. There should be a structure that gets them after they are released to prepare them to become physios, teachers of physical education.

Leno me, I’ll be your friend
Reply to  Eternal Titi Berg Pat Nostalgia

Cheers for the replies guys! @Hantal My cousin was in a PL club youth academy before it went belly up, and it did help him find a good university, he never made it but it’s good to know some clubs do make sure the kids ain’t stranded. Just hope it is across the board, would hate to think of AFC letting the young lot down. @Eternal Titi Think you hit the nail on the head right there, in regards to the parents-kids understanding of the situation. And definitely, spending so much time learning the sport and physical fitness in general… Read more »

Exiled Gooner
Reply to  Leno me, I’ll be your friend

They’re getting better, I think. When I taught English in Harrogate, I had several boys who were on the books at Leeds United in my classes. The club would ask for updates on their progress from the head of year, and I would occasionally have to fill out a progress report if they were falling behind. There were sanctions in place if their schoolwork fell below an acceptable standard, and all of the boys knew this. It was amazing how much harder they’d work at their Animal Farm homework when they knew the club was on their case!

Author
JeorgeBird
Reply to  Leno me, I’ll be your friend

They’re doing more now to help prepare the youngsters for possible careers in coaching if they don’t make it as a player.

Stick it in the goal hole Auba!
Reply to  Leno me, I’ll be your friend

Arsenal makes all academy players get their coaching badges alongside their other academic and athletic pursuits. This provides an obvious careeer path for those who do not quite make the grade. Whilst some academy players, who do not make playing football their profession, will be able to completely switch career track, for the vast majority football has played such an impactful role in their development, most will seek careers that are involved in the game.

Less than 1% of youth prospects make it to professional level.
Notice I didn’t even say Premier League/top of the league, I said PROFESSIONAL level. That’s just how much the odds are against them.

Of that crop of youth prospects, I think the only one to make a decent regular and current active career (sorry, I can’t count Jack due to injuries) is probably the Newcastle DM (name escapes me). Or that other player more rated than Jack that has gone on to become a kind of championship legend.

Do You mean Isaac Hayden and Henri Lansbury ?

Makes the Auba penalty all the more bitter.

If you’re going to come up with a horrible thought like that, can I counteract the effect it may be having by stating:

1) Sp*rs also have a chance NOT to win the title.

2) Arsenal can still win the title

I’m just sad that he’ll never get the chance to “Frimpong” any more players.