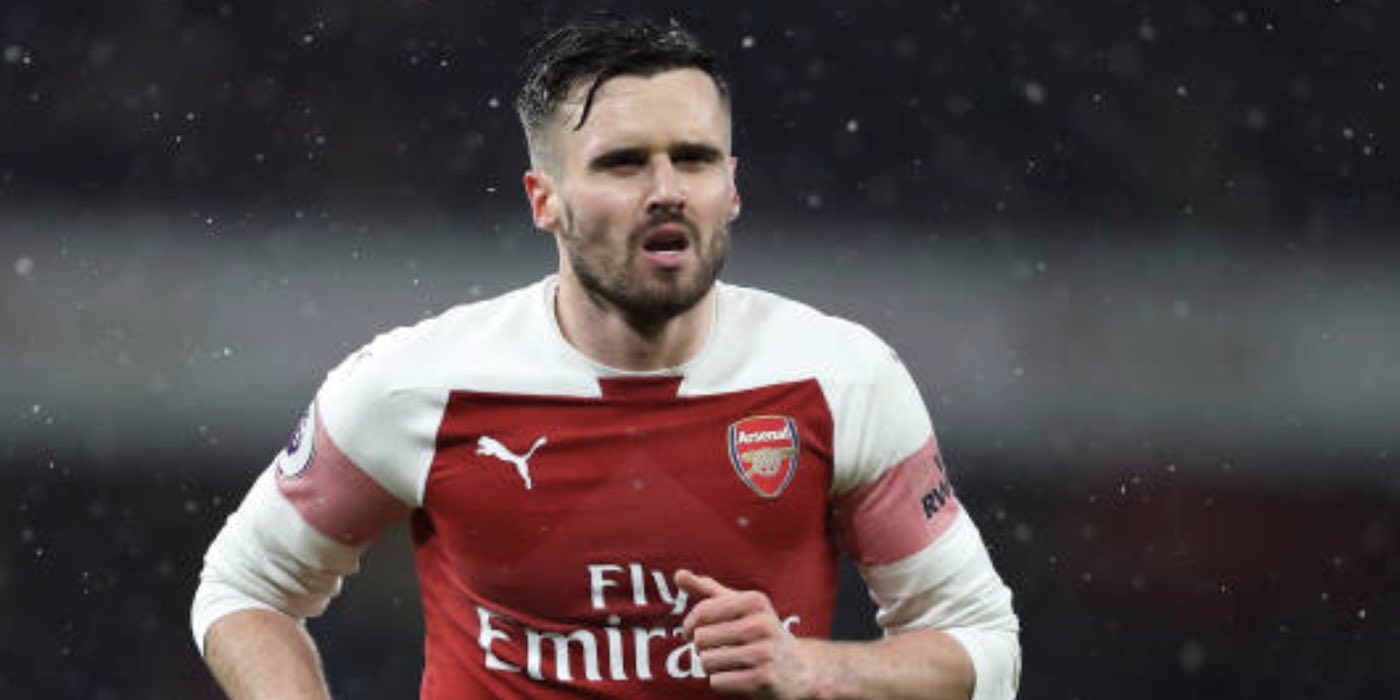 Carl Jenkinson believes he’s become a better player under the tutelage of Unai Emery and his assistant Juan Carlos Carcedo and says he’s enjoying life at Arsenal even if he’s not played as much football as he might have liked.

The right-back has featured seven times this season across four competitions providing back up whenever necessary to the likes of Hector Bellerin, Stephan Lichtsteiner and Ainsley Maitland-Niles. While he’s not faced the toughest of opponents, the 27-year-old has acquitted himself well with the team unbeaten whenever he’s played.

In a wide-ranging interview in The Times (£), life-long Gooner Jenkinson reflected on his season, one that has seen him consolidate his bond with the fans.

“I’ve got a huge amount of respect for the manager, He pays attention to every single detail,” he told Henry Winter.

“The analysis before games is always in-depth. And after I’ve played a game, it’s not, ‘You’ve done well’, that’s the end of it. I sit down with Carcedo and we go through clips. It’s such an education. I’ve learnt an awful lot about positioning.

“But for someone who has not played as much as I’d have liked, the fact that I’m sitting here, saying how much I’ve enjoyed playing under this manager and his coaching staff, says a lot about the management. I feel I’ve become a better player under them.”

Jenkinson will be out of contract in the summer and realistically, it’s unlikely that he’ll be handed a new deal. It’ll draw to a close an eight-year stint at the Emirates that will have seen him outlast every other member of the vaunted ‘British core’ aside from Aaron Ramsey.

Having experienced the highs and lows of Wenger’s final years at the club, and having played alongside some big personalities, Jenkinson is well placed to talk about the quality of the atmosphere in the camp. He’s impressed.

“There’s a real collective spirit,” he says. “You don’t always have that in team environments. We’ve got proper world-class players who are all about the team and not about themselves. They’re good characters, good lads. ”

If you happen to have a subscription to The Times, it’s well worth reading the full interview which includes mentions of tactical sessions with Lee Dixon over coffee, his love for the club and why it means so much to him to hear the fans sing his name.

I’ll be sad if Jenko leaves in the summer. He always plays for the badge.

Just one of the many ways he’s comparable with Axel Foley.

He does give everything as you say, but it’s not a question of commitment it’s one of skill. Our defence has been pretty awful for some time now and we need better players there as a matter of urgency. I think Jenkinson will leave when his contract is up, but I hope he gets a good club because he deserves it.

Emery is doing a very good job, at the start of the season I thought we’d finish 6th, we still might… but at least we’re making a fight of it.

Emery is honest, decisive, ruthless, pragmatic and experienced, we’re lucky to have him, and I really hope the club back him with more than £40,000,000….

I’m really not sure we can replace Lichtstiner, Cech, Rambo, Welbeck and possibly Koscielny+Monreal with upgrades, or even players at the same level with such a small transfer kitty….

His heart’s in it for sure, but to be honest he’s really not good enough. As the article says, it’s unlikely he’ll be with us next season. His departure (and those of several others) from the squad will help to reduce pressure on the overblown wage bill, so they’ll be a positive aspect. I wish him well.

Like him as a character, but I always thought he didn’t have enough quality for Arsenal. It shows what good coaching and a supportive team environment can do.
I wouldn’t be against an extension. He’s become a decent squad member and we need those, with the budget stretched.

Leno me, I’ll be your friend
Reply to  Onenil

Any idea how much the contract he’s on is worth? There were rumours it was anything between £25-70k per week, but I believe/feel it’s probably about £40-45k by now. If that’s so, and as much as I like the lad, we could reinvest that more suitably, but if it is closer to £25k per week a small extension and proper run out to better gauge him on a consistently playing basis might be a more preferred option. We need to sort out RB for sure, if we bring someone new in they’ll be aware that once Bellerin returns he’s almost… Read more »

raju bhai
Reply to  Leno me, I’ll be your friend

gunner17
Reply to  Leno me, I’ll be your friend

no reason why we can’t make him a low-ball offer, and see if we can extend him on £10k a week or something

Chambers for defensive midfield or centerback, and honestly, neither of them are really Arsenal quality, though Chambers is the better player. I think he’d do well at a mid to low tier club, depending on which position he’d be playing. I think Chamber’s is a better defensive midfielder then he is a centerback.

Why do we have to sort out Rback?

We have Bellerin and AMN.

It is AMN’s “natural position”. He impressed a couple of seasons before at Lback and this is his natural side being right footed.

Waste of time worrying about Rback when we have other more important priorities.

Rback side is a clearing house.

Need to get rid of Lichsteiner and Jenkinson. Also Pleguezuelo doesn’t look necessary.

Didn’t say it was a priority over any other position, just that it needs sorting out, 4 players in one position occupying over £200k in wages is something worth fixing. AMN has stated he sees himself as a winger, and that he was widely preferred as CM/DM by fans, him playing at full-back has been part of his development in helping him achieve better close control, and part necessity due to injuries/unsuitable (or so deemed) options. Wish you would for once just rationalise your inevitable response, if you read what people wrote instead of making up your own narrative these… Read more »

I had heard he’s on around £40k pw, could we offer him half that on a 1-2 year deal maybe? Probably worth having him if we’re letting Lichtsteiner go, the guy loves the club and is solid enough

Rumours suggest previous moves have fallen through due to wage demands so looks unlikely, though he’s a fan so possible.
Realistically I think he’ll want to go somewhere and play

Also because frankly he isn’t that great a player.

One reason he is still at Arsenal is sentimental reasons which is a stupid way to conduct things.

And of course the wages he is on do not help.

Can we all sponsor his wages and have him stay??

If he wants to be Gunnersaurus maybe but he will have to take a wage cut.

Stupid sentimentality. We need quality. There’s a place for Jenkinson in the stands.

Love Jenks. He truly is one of us.

Wait… Jenks is 27? When did that happen?

I believe it was just after he was 26

AMN is miles ahead of Jenkinson. AND considerably younger. Add Bellerin and we have two good options at Rback. The position I’d worry about at fullback will be the left side. Monreal may get a season extension but he is frankly getting on. As is of course Koscielny. Likely we will need to replace him too this summer. Prob at Cback we will have Sokratis, Holding, Mustafi and we should add another. Whether we retain Chambers when he returns is doubtful. Mavropanos frankly has potential to replace either Sokratis or Mustafi in a season or two but he needs to… Read more »

Exactly one year after…

This really does speak volumes about the professionalism and commitment of our new backroom staff. This is exactly why I wish Chambers hadn’t gone out on loan, I feel like all of our promising young guns have significantly developed under Emery and Carcedos tutelage.

Chambers made a poor decision.

Should have stayed would have got an opportunity.

We would not have to waste our time with Jenkinson either. Chamber’s “natural position” when he broke through and impressed at Soton was at Rback.

Formation for next season

FM beckons my friend.. pls don’t do this to yourself

Bailey would be a terrific buy, now where did I leave my wallet…

Maybe some people want to wank off to the fact he is an Arsenal fan but he isn’t the only one and although he has improved, he is too one dimensional.

AND we don’t need him.

Bellerin returning means we have fashion icon and AMN who is night and day above Jenkinson.

Jenkinson is being paid too much which is the problem.,

No buyers for the mediocre capability he possesses considering price.

Same issue with Elneny. Another one that is content with polishing the bench. We need to free both these players up.

Are you sure he doesn’t have another year on his deal?

He may not have the skill set to continue playing for us, but this man is such a lovable person. God bless you, Carl.