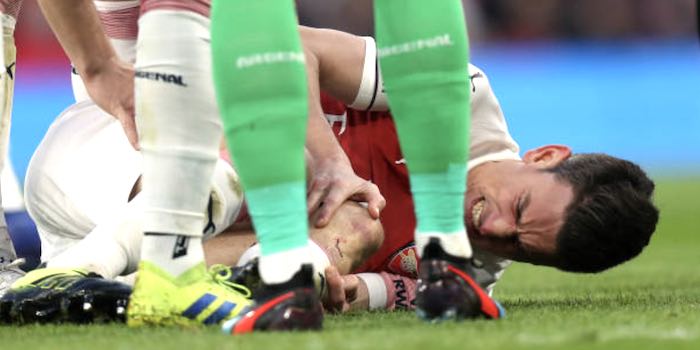 Laurent Koscielny required lengthy treatment around the 52 minute mark of today’s 2-0 win over Manchester United at the Emirates.

At the time it wasn’t quite clear what the problem was, but after the game it was revealed that the Frenchman suffered a 3 inch gash to his leg, which was closed up so he could play on for the rest of the game.

Club officials say Koscielny played with a three-inch gash in his leg for the final part of the game, which got clamped together on the pitch when he was down for treatment.

The captain was outstanding at the heart of the Arsenal defence as the Gunners moved into the top four, and the 33 year old is really putting his body on the line for the team as we look to finish in the top four.

Having come back from an injury which could have had seriously debilitating effects on any player, let alone one in the September of his career, it speaks volumes to his character and personality that he wouldn’t be sidelined by yet another physically demanding game.

Let’s hope he can stay fit and together between now and May, as he’s still a hugely important part of this team.

How did Koscielny rate for you? See our ratings and leave your own on the Arsenal 2-0 Man Utd player ratings.

I love this man

His comeback from what I honestly thought was the curtain drawing injury to his Arsenal career has been nothing short of legendary. He took all of 3 games to get back in the groove and it’s like he’s said to himself “my people need me” and has put in game after game of top shelf work. Him and Rambo giving everything they have to make sure they leave the club in as good a position as they can. Truly legends of our time.

He saw Mustafi warming up, and decided to play on. Legend.

Literally just had Mustafi put one back into his own goal under zero pressure in FM 2019. Even Sports Interactive know he’s useless and mistake-prone.

why the fuck didn’t you sell them in the first transfer window?

Kos was out for four months. Needed cover until January. Sold him on then though!

Kościelny showed a great spirit and physical display as always … i love his die hard attitude and i feel proud of his Polish background !

Definitely need to keep Kos the boss at the club next season, hope he ends this one lifting the European Cup

Can we clock Kos the same way you used to be able to do a car. Wind him back to a 25 yo. CB sorted.

I could do with a bit of that myself these days…

Can’t we see if Mathieu Flamini can chat to some of his science buddies and have them knock up a series of Kos clones for the next 15 seasons?

We need his statue outside the stadium. Holding his groin in pain with Harry Kane on the ground holding his head.

That could be the start of a series of injured player statues. Ospina can be next up

I had some doubt he still had the belief in himself to perform as a top defender, and the comptetive edgeback to Lead our lines, thank you for provning me mega wrong king koscielny

Boscielny showed them. Great to have this guy around with his never-say-die attitude. Legend.

Kos is as Gooner as it is possible to be.

I’d love to for him to extend his contract, if not that then he has to be part our club in some coaching capacity like merts. He has to retire with us, literally in the top 5 players of the second part of Wenger’s reign.

We should literally be worshipping him, he is as much a legend as Rambo in the way he got us the 2 FA cups. Remember when he secured us top 4 against Newcastle last game of the season? Levelled us against Hull city in final. Too many saucy goals to remember from him.

We suffer injuries against manu.. they go in with their studs up

Oh hi onion cutting ninja. When did you get here?

He’s always in the war. Was worried he would be knocked again but great performance by the old war horse even if we had 4 or 5 VERY nervy moments in which they should have scored against us. We rode our luck but lady luck was defo on our side particularly with the penalty call. We will have to be sensible rotating through Mustafi, Koscielny, Sokratis and Monreal in back 3 or back 4. Other thing is great to see AMN in again. Was a bit quiet first half but some superb recovery tackles second half of second half. We… Read more »

He played in Santori’s dream.

You must have been thinking about writing the same bit about Torreira giving the ball away in 3 games (as per every other post you write) and wrote his name instead of Xhaka above.

When you hear the reactionary short sighted fools of aftv such as Claude saying he’s like an old race horse… Who should be shot. It really shows how toxic som of the fan base is. Then I come to arseblog to see how wholesome it also is.

As captain he has become a real leader on the pitch. Not overly vocal but he leads by example. I used to worry that his head would go down quite quickly in adversity but he has become very strong in his mind and seems more focussed than ever. I know he was talking about leaving at the end of his contract but if he can stay fit I would love to see him here longer. Experience pays at centre back and to have him there to impart knowledge to Holding and Mavropanos (and to keep Mustafi away from the starting… Read more »

I’m in tears with love for Laurent

If he had left when he wanted to, we’d be fucked right now

He is the Boss that can’t be bossed in the middle of the park.