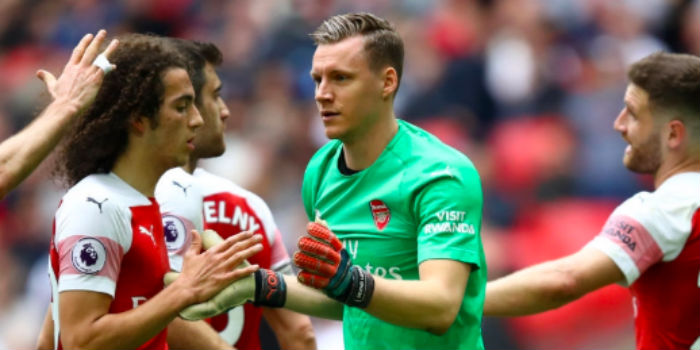 Bernd Leno says Arsenal’s failure to beat Sp*rs was frustrating as the Gunners settled for a 1-1 draw at Wembley.

Pierre-Emerick Aubameyang had a golden opportunity to secure all three points when he won a penalty in the final minute only for Hugo Lloris to save the striker’s spot-kick.

We were good value for our half time lead, given to us by Aaron Ramsey on 16 minutes, but were pegged back by Harry Kane’s late penalty, awarded by referee Anthony Taylor for a shove by Mustafi on the England captain even though he was offside.

“It is very frustrating because we conceded a late goal and also had chances to score with the penalty,” Leno told Arsenal.com.

“We were a bit unlucky but that’s football. The first half was good and the second was not our best game, and the equaliser was deserved for Tottenham but in the end we had the chance to [win it].

“I think it was a very good spirit we showed, especially away we don’t always play like today but don’t need only spirit against team like Spurs, you need it in all the away games.

“We have to look forward to the other away games, they are the key to getting a top-four place.”

Looking ahead to Sunday’s clash with Manchester United, Leno went on, “Our confidence is very big because we are still in a good moment, we played well against a strong team, especially in the first half when we controlled the game.

“Next week we have another big home game against Man United that we want to win against another team who wants to get into the top four.”

Leno can be pleased with his efforts in goal today, which included an amazing double stop to deny Cristian Eriksen and Moussa Sissoko, although he admits, he didn’t know much about the situation.

“I don’t know what happened, everything was so quick,” he said. “Sissoko shot, I didn’t see the ball, I just reacted: I think the best saves are always those when you don’t quite know what happens!”

You can see how we rated Leno’s day in the office, here.

Leno: I want to play all the games

Leno: We were not a team, on or off the pitch…you could see this

He’s getting better and better every single game…

I should also mention that Harry Kane is a toadstool

Anonymarse
Reply to  my name is bob

If you have ever stooled out a toad….

Hairy Stain ‘s the name of that load…

Mustafi, Abu, and Emry let us down.
Mustafi clumsy fker
Abu poor and weak penalty kick
Emry bringing on Ozil when we are 1-0 up with 20 min to go….

It’s Emery. I agree he put on Ozil too late but cannot see why you blame him when he got the tactics exactly right.

too late …are you fucking kidding me…??
he was a total passenger. the game demanded him not being played at all.
it demanded physicality, areal play, tackling ….etc
all of which he did do shit at.

I know, lets bring on a kid to see out an important game against the rivals, play them in an unfamiliar position, and expect results!
OR…
Bring on an experienced international into his favored position.

We all know you hate our most creative player. He was involved in a few moves but of course you will always scapegoat him.

It’s not that some of us hate Özil.

It’s people’s stubborn insistence, even after a magnificent team performance, on bitching about whether Özil should’ve started, or come on earlier or whatever.

So fucking boring. And very disrespectful to the guys who did the heavy lifting today.

I don’t hate him at all. But I don’t rate him as much as many of his fans. What I hate is the toxic atmosphere created when he’s rightly left out of unsuitable games for his attributes.

Imagine criticising the fucking manager after this game…

Yeah emery got his shit spot on. I was proud of the team tactically today. Gambled a bit in the first half and it came off brilliantly. Mentally I treat todays performance as a win.

A Different George
Reply to  Dobby

I know that almost no one will agree–but I still would have liked to see both Lacazette and Aubameyang starting, instead of Iwobi. I think they would have run Trippier off the park, overwhelmed Wanyama (even more than Ramsey and Guendouzi did without them), and we would have won the game by half time.

I could see why you would say that. I was thinking the same thing. 1-0 lead why not bring on someone who can grind it out at that point with 20 min left? Why didn’t he have elneny in the bench for this occasion instead of having 2 LB on the roster? Whomever came on for Ramsey wouldn’t have made a difference with the penalty so it didn’t matter. Being tied 1-1 and not having ozil on the pitch would have sucked.

Exactly. Ozil being on the pitch gave us a good chance at a winner rather than suddenly needing a defensive side to create something from nothing.

That was a brilliant double save today. All credit to him. If we can mould a defence quartet in front of him this summer and get the settled backline we need, he’ll get better still.

And you are not used to it?
Its the defence that lets this club down.
If you can call it a defence…

Except today they defended brilliantly so give credit where it’s due.

I have to say I was really pleased with the performance overall. Good performance away vs top 6, a few fuckups and some shit officiating not withstanding.

Should have scored 3 or 4 goals and they shouldn’t have had any.

Just a shame about the result.

I just hate Mustafi.
Not a single positive thing I can think of to say about him.
Offers nothing except calamity and incompetence.
Sooner he is sold the better for Arsenal.
God fucking awful player.
Would be more use if he was long term injured…

Dude, don’t wish that. He is human just like you, how would you feel if someone wished that to you? However much he fvcks up, I don’t wish him to get injured. I just wish he is sold ASAP.

He’s not all bad. He scores goals too.

Exactly. Personally, I don’t hate Mustafi, I just think he needs to play elsewhere. Some of the vitriol spouted towards him is a bit much, he’s not good enough but I don’t doubt his commitment and he doesn’t pick himself.

How many time has kola gotten away with pushes far worse than that in the box. Blatant shit too. It’s just that this time it was that goddamn golden boy spuds mouth breather.

Fantastic double save today by Leno.

In the end opportunity cast away by us as we were decent for most of the match.

BUT we move on and the important thing is we look threatening so if we can prey on a “weakened” United next match, there are 10 games left and we are 4 points off Spurs.

Today was a case of lets win it because we can but if we don’t, then lets not drop two points. They are still very much in our sights and the aim should be STILL to finish above them in 3rd.

Two poor moments cost us today. Been defending Mustafi but VERY VERY rash by him today in the box with this lot. It was offside by a mile (a whole line of players) but we need to be more mindful of refereeing “over sight”. Also whilst Mustafi wholely culpable, still not an excuse to go hysterical. He wasn’t culpable for us losing or dropping points at BHA, Soton, Liverpool or West Ham. And generally today in an unfamiliar position, he did decent. The other issue of course was on the other end we did not capitalise on the amend the… Read more »

We know Spurts have Liverpuddle and Schitty away still to come. That’s potentially 6 points.

Our toughest match will be against United. It will be another ‘final’ we need to win with 4 points adrift off of the great pretenders.

Lacazette, Aubameyang have to be SHARP. Not let opportunities be squandered.

Regardless of soft goal against us, we had opportunities to do damage and win it today but we are simply too slack. We need to put them away.

That double save was world class. Leno has been quietly comfortable as our number 1 and it’s lrovably a testament to his solidity that he hasn’t really been talked about since taking over from Cech. No glaring errors or critical mistakes. He’s been solid but not overly inspiring either, but this game really showed what he is capable of and what he could become. That save was absolutely fantastic – I understand that he may not have seen a lot of the ball and was perhaps instinctive but he also palmed in right over the bar which needed some serious… Read more »