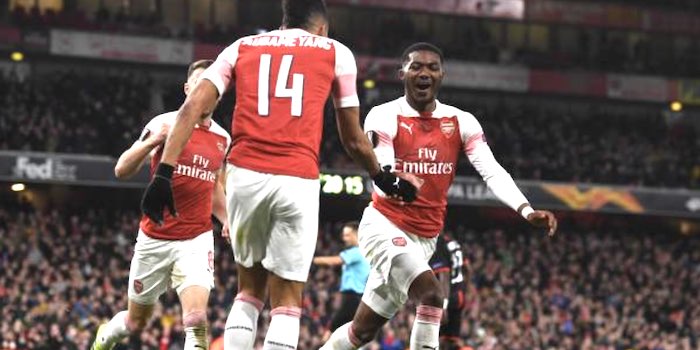 Ainsley Maitland-Niles says that instructions from Unai Emery led to him scoring the second goal of his Arsenal career during the 3-0 win over Rennes in the Europa League last night.

The 21 year old was playing as a wing-back, and revealed that the Spaniard has told him when we play this formation to try and get in the box to get on the end of crosses.

So, when Pierre-Emerick Aubameyang stood the ball up to the back post, Maitland-Niles was alert and ready to head home to double the Arsenal lead.

Speaking afterwards, he said, “It was a great cross from Auba and I just managed to be there at the right time to knock it in.

“The manager keeps telling me to get in the box for crosses when we play five at the back so that’s what I tried to do.

And the Hale End graduate also had some words of praise for the home support.

“The atmosphere at home has been fantastic. We need our fans to be behind us and we’re just showing our fans that we appreciate it by going out there and getting good results.”

In the absence of the injured Hector Bellerin, we’ve been struggling to find someone to fill the gap – hopefully the last two games are evidence that Maitland-Niles can step up.

I bloody love this young man. Hope he maintains this level of performance and becomes a key player for us in the future!

i cant believe people actually wanted Lichtpensioner or Mustafkup ahead of AMN in the starting XI as recently as a few weeks ago. Here’s a piece of free advice #TrustEmery

Facts are fluid in football.

I still want to see AMN as a CM in the long term, but the kid is showing what he’s made of at RWB at the moment. Seems to have cut out the lackadaisical play that he was sometimes guilty of last year, which is likely to be down to the greater sense of responsibility in the back line. Wenger always liked putting young midfielders on the wing didn’t he, saying that it gave them less room to manoeuvre so that when they did play in midfield they had the whole pitch to play in. Maybe something similar is happening… Read more »

Nothing better than watching a ” home grown” / Hale End Academy true Arsenal developed youngster break into the first team & hopefully have a successful career. Let’s hope it does not go to AMN’s head and he maintains professionalism. That can be difficult given monies paid but careers are short and it is all about continually striving to achieve. If any of the young players want to learn from a true professional with his head screwed on just read Alan Smith’s autobiography ‘ Heads Up’. A truly modest man who realised just how fortunate he was to be a… Read more »

AMN has played so well the last 2 games that I had nearly forgotten about Hector. Long may his good form continue

I see him deputising for Hector as our future RB/ RWB.

Good lad! He has come on leaps and bounds. Looks a.proper first teamer now.
Remembering to praise the boss was a smart move too.

Maitland is the real deal. Keep up the good work, Son. Soar to greater heights.

Very good work staying awake and alert and then slamming in a very good header. It would have been easy to switch off. Check for example Ozil in the middle of the box who turned away in frustration thinking the ball played was a mistake and offside (or going out) and next time he looks up its in the back of the net! Play the whistle mate!