Arseblog News – the Arsenal news site
Home Players Men Ramsey: I wanted to do it in my last game against Man... 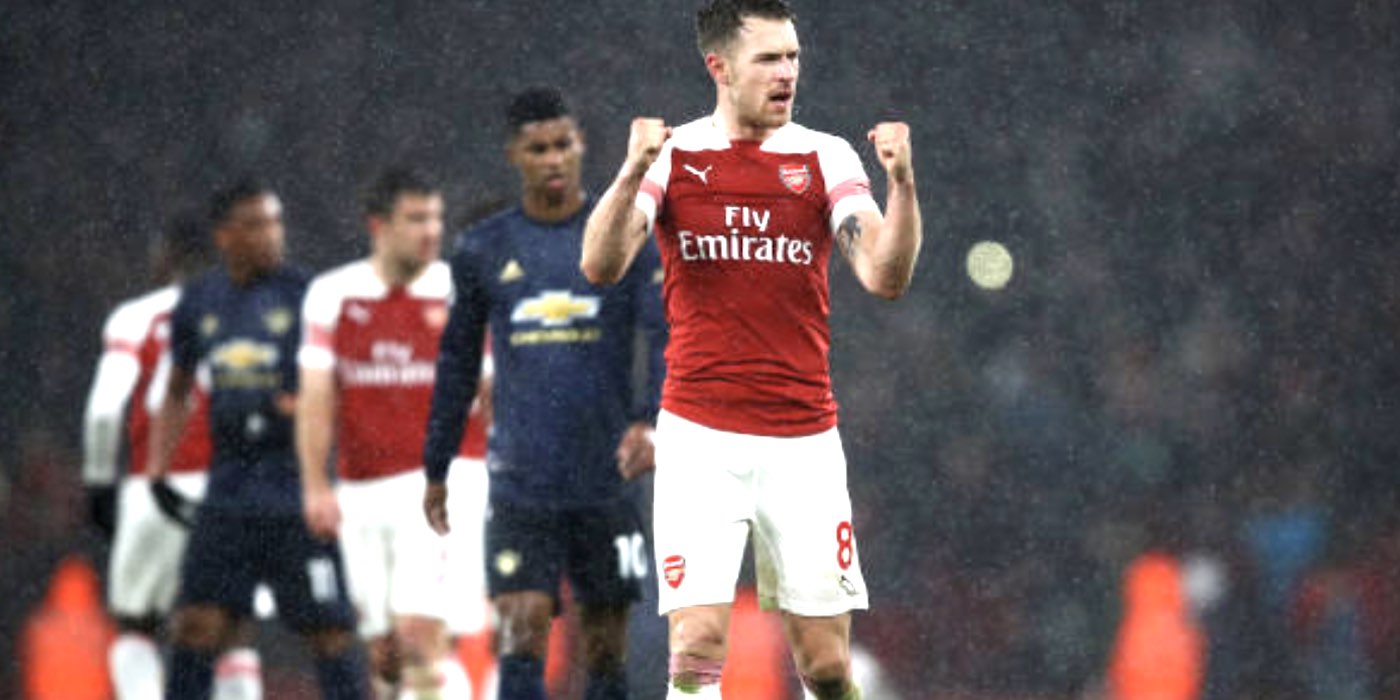 If anyone epitomised the effort that Arsenal put in to beat Manchester United 2-0 yesterday, it was Aaron Ramsey.

The midfielder ran further than any other player, covering almost 13k in the 90 minutes, but also produced a defensive effort that contributed hugely to the win.

For a player more known for his attacking ability to complete 8 of 9 tackles illustrates how hard he and the team worked, and their reward for that was a victory, a clean sheet, and three points which moved us into the top four.

Speaking afterwards, the Welsh international was keen to praise his teammates for the effort.

“I think to a man we left everything out on the pitch and we worked our socks off,” he said.

“We created a few opportunities in the first half hour of the game and I thought we controlled the game very well.

“We know that we’re strong at home and we’re on a good run, so hopefully that can continue.”

Touching on his own performance, the 28 year old used the fact it was going to be his last Arsenal game against an old rival as motivation.

“I knew that before the game so I really wanted to go out there today and put in a big performance and help my teammates as much as possible.

“We managed to do that and it’s probably my last game against them in an Arsenal shirt, so I’m just glad we won and we’ve put ourselves in a great position to finish the season strongly and get into the top four.

“We know that no game is easy in the Premier League so we’re going to have to be at it every single time.

“We’ve got to keep going, keep believing and we’ll see where we finish at the end of the season.”

I wrote in one of the news items last week that it might be a good idea to play Ramsey in midfield where he has played all his career and got lots of negatives. On negatives can we stop this bloody “yido” thing at the end of the song, we’re better than that.

Gonna miss rambo, can’t believe we are letting him go!

Im my opinion one of the worst decisions in the last decade. Will be a massive player for Juve over the next years.

A contract was agreed, he said multiply times that he was ready to sign. Arsenal themselves said that they withdrew the offer. I don’t know why there are still so many people acting as if he was the one who wanted to part ways. He loves the club. He makes that very obvious every minute he’s on the pitch.

Have you deliberately left an important detail out to support your own narrative? The contract was on the table for quite some time before the management pulled out, my consensus is that the agent was bargaining for more money based on the Ozil situation, afterwhich Arsenal got fed up and pulled it. If Ramsay really wanted to stay, he would have signed on the dotted line the moment it was on the table. Don’t make your own narratives, these are facts.

Wenger explained the dilemma recently. You either pay crazy salaries or spend more than let’s say 50 millions to buy another player. Players and agents want to get the transfer money that clubs were supposed to spend if they had left.

The club isn’t “letting him go.” And its not one of the “worst decisions” …. Stop listening the BS and blather of the likes of Merson and the other twats. According to David Ornstein, as reported in this very space, Ramsey was never gonna sign a new deal. Ramsey said goodbye to Arsenal. His choice. Fair play to him. He gave us 10 good years. Won us two FA cups. IMO, he goes with love from all gooners. He’s playing particularly well lately, but he’s not the world beater many are acting like he is. Many a fallow season and… Read more »

Ornstein also said both Arsenal and Ramsey were close to agreeing a deal before Arsenal backed out (as seen here on twitter): https://twitter.com/bbcsport_david/status/1045316829042933761

Guess its one of those ones we will never know the “true” story. Anyway its a shame to see him go.

quite. My least favourite thing about football these days is the absurd punditry and the willingness for a lot of the fans to fall for it.

Cheers for all Rambo

That’s just the way it is.

I hope we win the Europa League this year and Ramsey scores the winner. Can’t question his professional commitment on the pitch for us. Legit have that same feeling of sadness that Ramsey is leaving us like when Rosicky and Artera retired or when Henry left us the second time. Wish there was a way we could keep him at the club still.

Brilliant performance, but as ever we are still left wondering if they can produce more consistently. Looking at the fixtures, it is well within their grasp for 3rd.

This concept of favourable fixtures doesn’t exist in PL. It is not like PSG un the french league.

“…probably my last game aginst the in an Arsenal shirt”?!?!?

Juve could always face them in the Champions League if United manage to finish fourth, a BIG fuckin IF to be honest.

Huh? He said in an Arsenal shirt.

Yes, he will be wearing an Arsenal tshirt underneath. Rambo will always be red forever!

Against man u in an Arsenal shirt

We love you forever Rambo

You only value something when it’s gone.

Despite popular belief he’s never been shy of a tackle or two.

Great performance from him yesterday. Doesn’t make losing him on a free any easier. Cheers geezer.

He really is putting in a shift in every game.. Makes me feel good about thursday ?

THERE GOES AN ARSENAL LEGEND

Hate to see him go but he can leave with his head held up high. You know he’ll give 100% till the last game. Here’s hoping that is a European final!!

Really don’t want him to go. I’m gonna be sad and depressed on the last Day of the season.

Just imagine if that cunt Shawcross hadnt broken Rambos leg. Set him back a few years that. We are only really seeing him back to his consistent best the last few years.

fair play to him. I’ve been critical of him in the past and stand by that, i think under a more disciplined coach other than wenger he’d have been shaped into a truly special player. but he did a job for us, and is playing well despite knowing he’s off in the summer. extremely professional from him and ensures he’ll receive a warm welcome back to the emirates in next years champions league.

Too bad well have to send him back to Tuscany with yet another early exit.

The Welsh, he is a Legend.

Midfield was key to this victory. We got the balance between attack and defense right. Unai won the tactical chess game with me is initial set up. Surprisingly Ramsey was started in a deeper role. Again we are want to remember he has had both good and bad in this position. Together with Flamini, they presided over an unbeaten run including wins against City and Galatasaray several seasons past when we were short of some of our star assets. Ironically, it was when these players returned that we suffered goal shy and moving forward to make up the difference, he… Read more »

Midfield- Ozil led in chances created, Ramsey in tackles and Granit in passes.

Also like Granit’s general positioning throughout plus his critical tackles.

Goal wasn’t too shabby either.