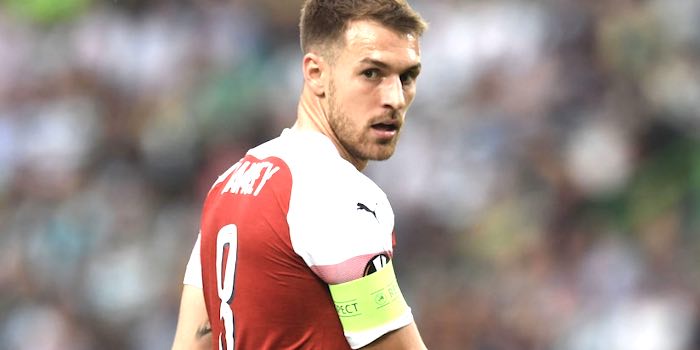 Aaron Ramsey has withdrawn from the Welsh squad to return to Arsenal for treatment over a thigh injury.

It had been hoped that the midfielder could play in the European Championships qualifier against Slovakia tomorrow having sat out a friendly against Trinidad and Tobago in midweek, but the injury hasn’t improved sufficiently for him to be considered for selection.

It’ll be a worry for Unai Emery as he keeps tabs on his players from the warm weather training base in Dubai, and the Gunners are already sweating over Nacho Monreal who didn’t make the trip because of a calf strain.

Ramsey has been in excellent form of late, and with eight games in April – including two legs against Napoli in the Europa League – Arsenal need as many players fit and available as possible.

Hopefully this isn’t anything too serious, and some common sense has been applied in allowing him to return to London, but we’ll have to wait and see what kind of update we get from the medical team in their next bulletin.

Given the vital importance of the EPL run-in and the Napoli game, we need to ensure that he’s fully fit. The Arsenal squad isn’t strong enough in depth or quality to cope with many injuries to regular players.

Why does this have so many down votes?

I’m not sure either. We certainly need Ramsey (while he’s still with us), and looking at the results this season when we’ve had such key players missing, we’ve not done too well. Some Gooners seem to believe we’re a lot stronger than we actually are.

I hope he’s okay, but this is why I feel Juve overpaid for him. He just can’t beat the injury Gods.

Possibly because it repeats what was stated in the article itself.

I fking hate it too, but on the plus side, it gives our injured players who have minor knocks some needed recovery time.

Our last game in April is on the 29th against the Foxes. If we get passed Napoli, we play our semi final 1st leg 3 days later, on May 2nd! Let’s hope for an injury free month, cause we will need all our players.

Great player, but he is a bit injury prone is our Aaron.

True, but considering what happened to Diaby, Ramsey is doing well. The injuries were similar.

With the size of contract he would reasonably expect, I see why the club decided to let him go. Emery has certainly got the best from him by limiting appearances to matches that count.

Ramsey injured again, just when there’s a busy schedule coming up. This happens every season, unfortunately.

He puts his thighs on the line every time (even when he’s leaving) bless him. A true professional.