This match was the perfect illustration of why I get nervous about Arsenal when I feel like things are going well.

After the stinker of a match in the first leg against BATE, Arsenal had played well beating BATE in the return leg, then followed with wins against Southampton and Bournemouth and a draw where they outplayed Sp*rs.

I thought that Unai Emery had rotated his squad well, the team was back into the 4231 that seemed to facilitate pressing more effectively and that the team was starting to develop attacking ideas beyond get the ball out to the full back for a cut back attempt.

I felt really good that Arsenal could go out and really put this tie to bed early, then maybe get some subs on to keep people fresh for Manchester United Sunday.

Things almost went to plan, and then self-destruction blew everything up. Now Arsenal have a major hill to climb to advance to the Quarterfinals.

Rennes 3-1 Arsenal: By the graphs 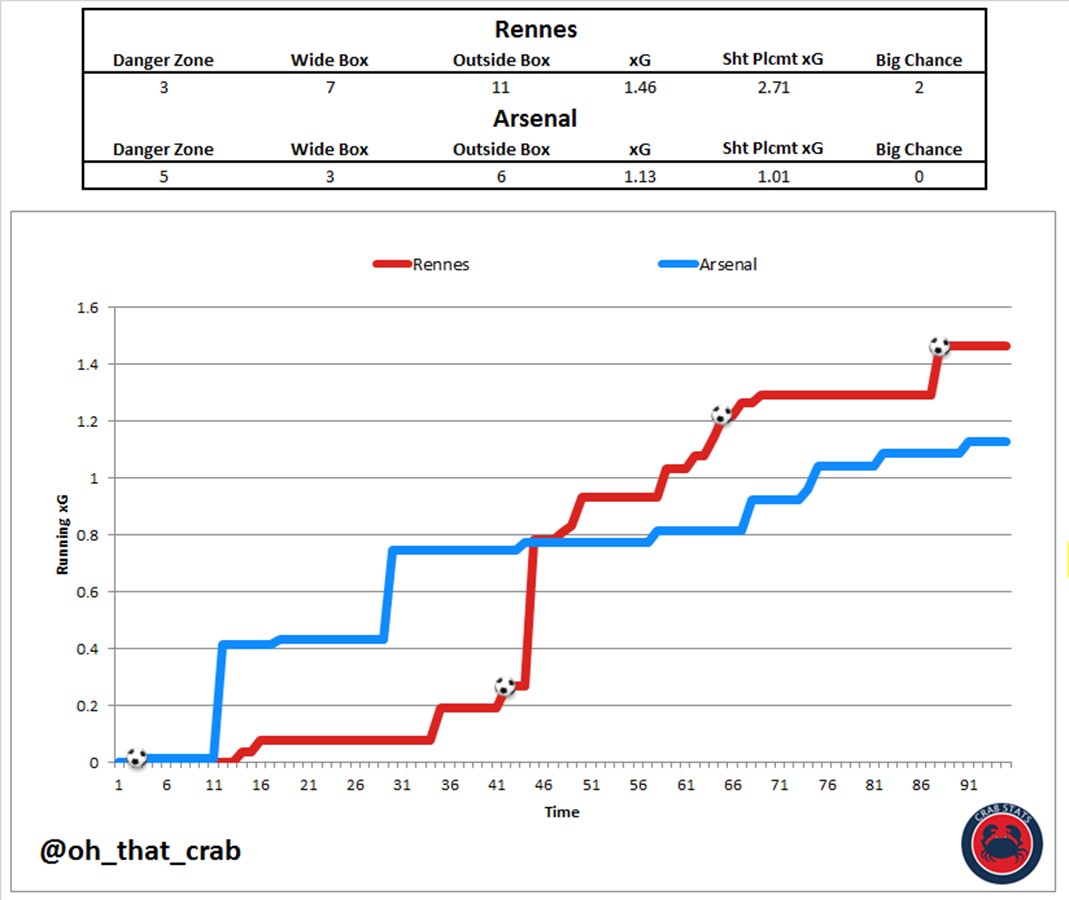 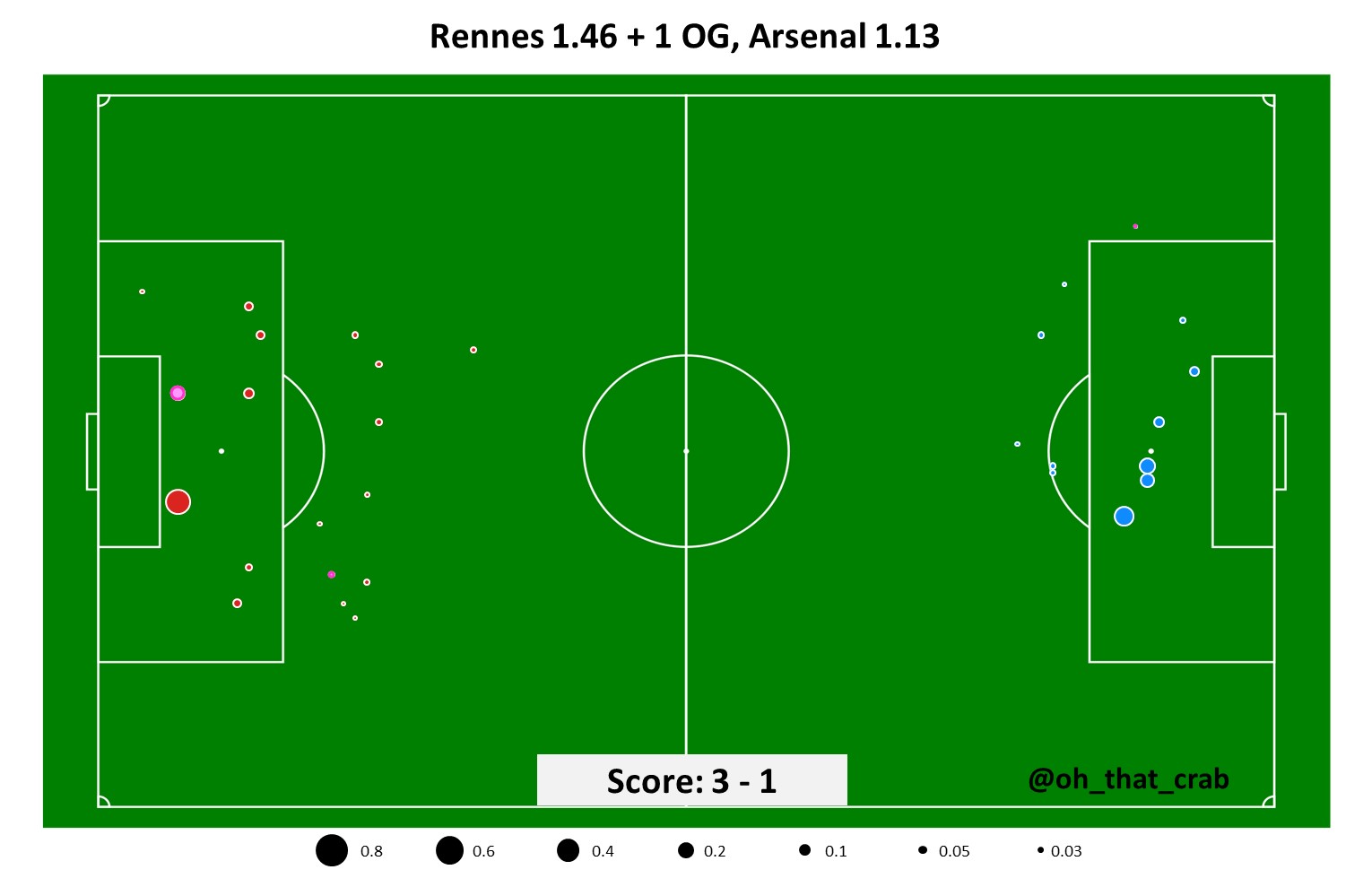 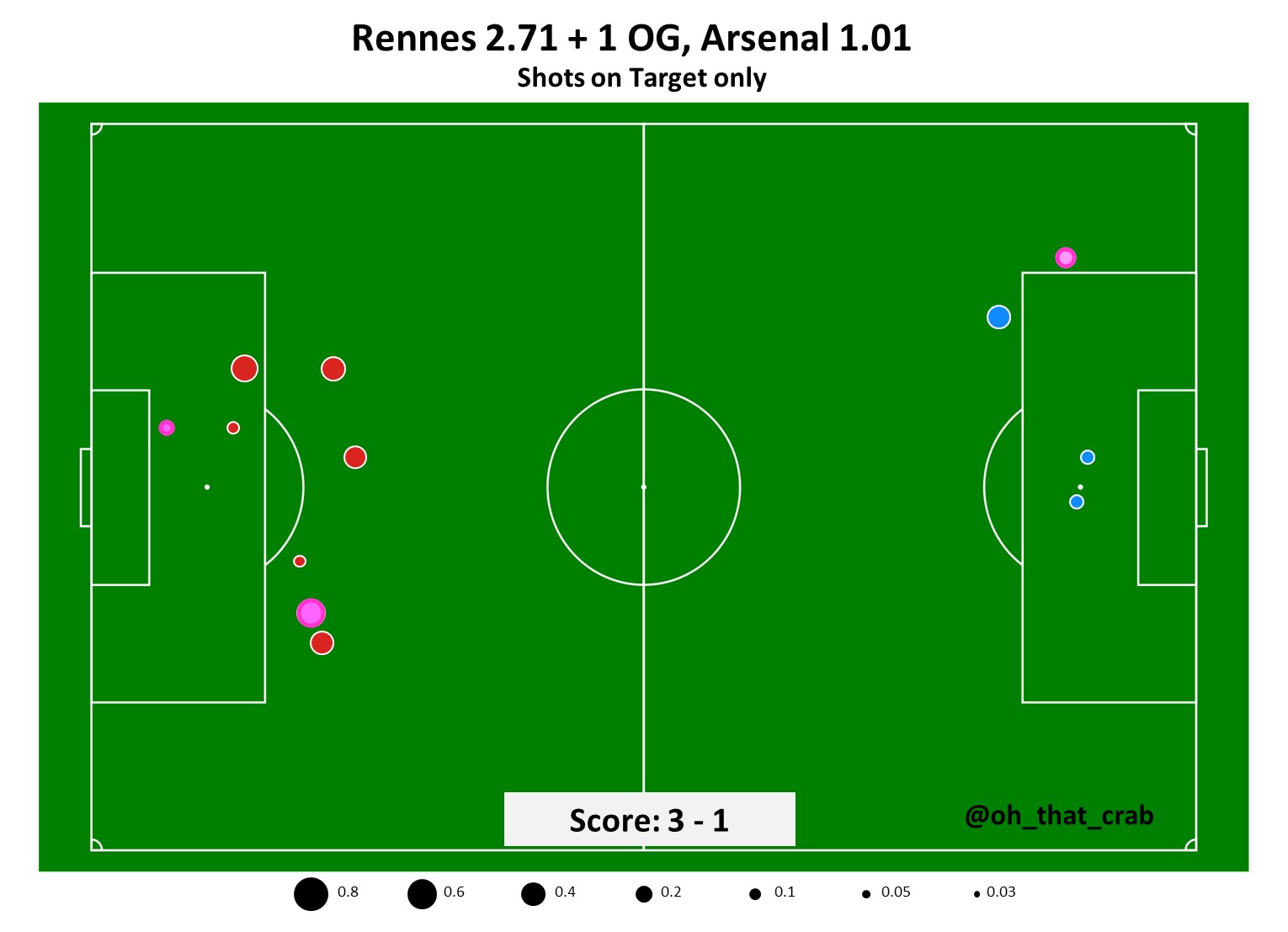 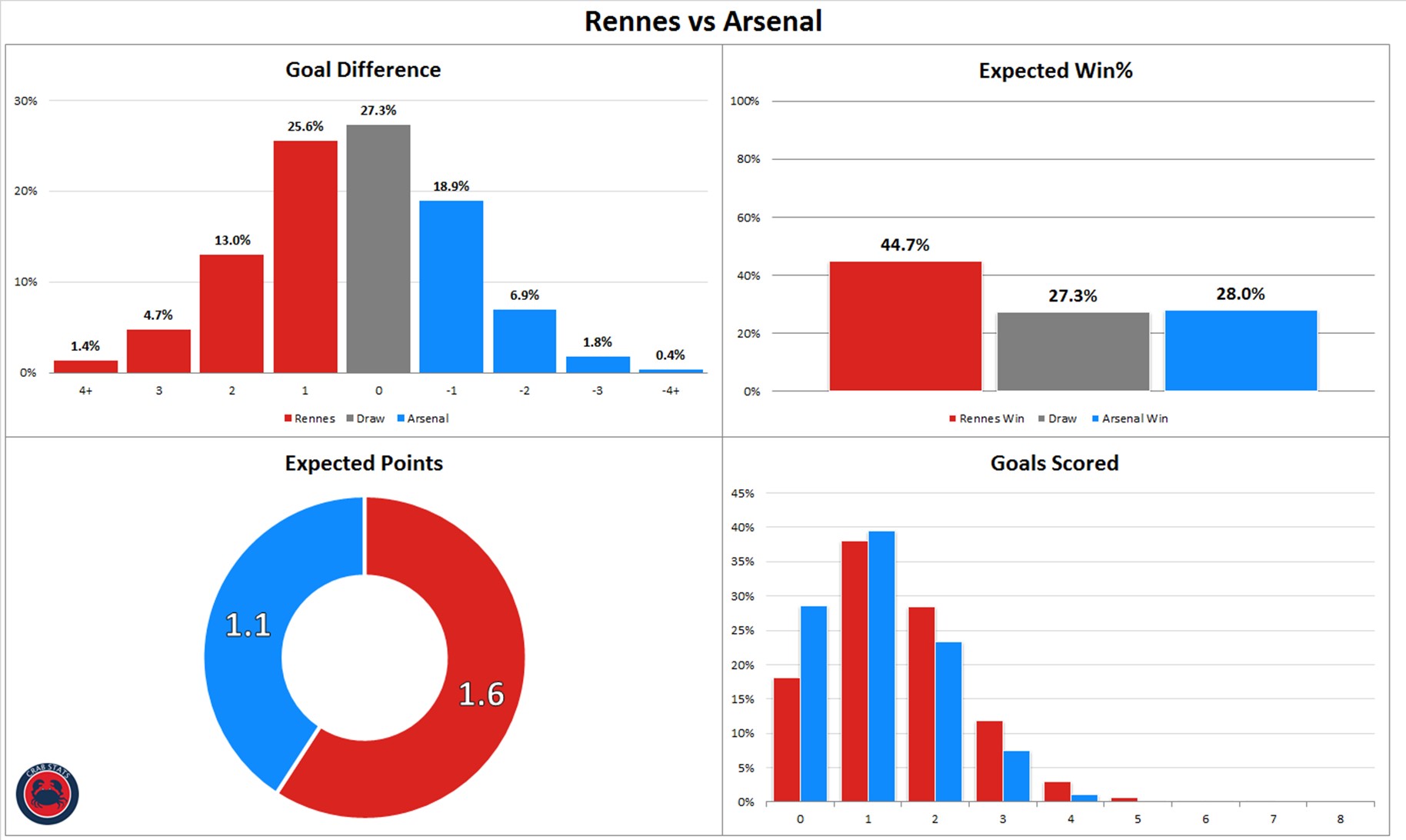 Rennes 3-1 Arsenal: By the numbers

3 – Times I have just written the F word over and over again in the content management system before deleting it and trying again.

1 – Dive committed to draw the second yellow card on Sokratis. To be fair in real time I thought it was a foul and only on replay can you see that Ismaila Sarr locks his arm over Sokratis’ and instates the contact and then really sells it.

3 – Yellow card type fouls committed by Granit Xhaka. Sokratis was perhaps unlucky to get his second yellow, Xhaka more than made up for it with his luck to stay on the pitch with the fouls that he committed in this match.

25% – The change in the percentage of Arsenal advancing from the third goal conceded. With a 1-2 scoreline, Arsenal were still the favorites to advance but now with two goals to overcome, Arsenal have about 33% (my model) to 35% (FiveThirtyEight) to 44% implied from the current betting odds.

4 – Players that Arsenal had in front of the ball, when Nacho Monreal gave the ball away.

1.2% – Times that a team would expect to score a goal starting a possession from that ball location (they were 90+ meters away from Arsenal’s goal).

2 – Hands raised in frustration by Monreal after Rennes dribbled pas him and sprung the counter attack.

52% – Tackle success rate for Arsenal after the Red Card

15 – Shots Arsenal conceded after the Red Card, 5 of which came from Benjamin Bourigeaud including the screamer of a goal.

6 – Saves made by Petr Cech

0.7 – Additional expected goals saved by Cech based on the shots on target face and the placement within the goal.

9 – Clearances made by Arsenal, with only 4 coming after the Red Card.

It doesn’t do a lot of good to dwell on this match, especially with such an important fixture coming on Sunday against Manchester United. This was a bad performance and there is a ton of blame to go around.

Sokratis plays on the edge with his physicality, he got away with kicking a guy in his butt without a card and then got sent off rather harshly but maybe could have done better to avoid getting in that situation on a yellow.

Monreal really looked his age in this match. He still has the technical ability to be a good attacking player and he has developed into a dependable defender. What he has lost, is the ability to be able to do both in short succession.

Matteo Guendouzi came on and added more chaos instead of solidity to the Arsenal midfield. He also really didn’t show nearly enough effort to help stop the counter attack that led to the third goal.

Pierre-Emerick Aubameyang had a number of dangerous chances and couldn’t convert. He also was incorrectly flagged for offside where he would have been one on one with the keeper.

Best to move on, beat United and take care of business at home on Thursday.

Once we went down to 10 we were shockingly bad. The one thing we had to do was keep the ball. Instead we were sloppy all over the pitch getting caught in possession or passing inaccurately. Gambling repeatedly possession and losing.
A total shambles.

Only numbers that matter are that we have to score 2 goals without reply or 4 otherwise.

The red card highlights how important Sokratis is for our defence and structure. We are in dire need of overhaul in the defense department…

Very true. It was his injury in the FA cup match against Man Utd that was the tunturning point as we were on top before that

When will we ever stop serving up these kind of tasteless dishes. Surly the players must be as sick of it as we are.its always lurking around like a virus. Just when things are improving bam it’s time to drop a nasty.

We just have to be honest, and admit we are just shit. We are not the same Arsenal of the Henry and Bergkamp era. Wenger started to brain wash us and we fell for it, but the reality is that we are in gradual decline. Most of it has to to with the Stan not investing in the club. I blame Stan for 70%. But the rest comes down to the lack of effort and desire from our players. Our them is mentally weak. We need a complete overhaul in every department to seriously keep up with the expectations of… Read more »

So the French man laughed at Emery. Nothing wrong.
He shd remember :
He who laughs last, laughs best.
Arsenal need to score 2 goals to go through.Its within their capacity.
Its most important for the gunners to get the opening goal.
That will force the French side to go on the attack freeing space.

All Rennes have to do is to park the bus. Arsenal can’t score two with 11 players in front of them. We are not good at it. I was happy to hear Ben Arfa say they are going to the Emirates to win.

Our home form is good, but United give me nightmares.
It’s still the fixture that gives me the most anxiety, and under Solskjaer they’ve become a good counter attacking team again, and it’s ruthless counter attacking football we’ve struggled wit the most, and our struggles go back a long way.

I still think the Rennes game will be close, I certain fancy us to win the game, even at a 2 goal disadvantage, I think it’s 50/50 we qualify.

If Rennes try to win, they’re going to lose. If you see Rennes park the bus, you know we’re not going to win. We only have calamity Mustafi who is dangerous with headers. All our strikers are poor at it.

I have the awful feeling that we’re going to win 2-1.