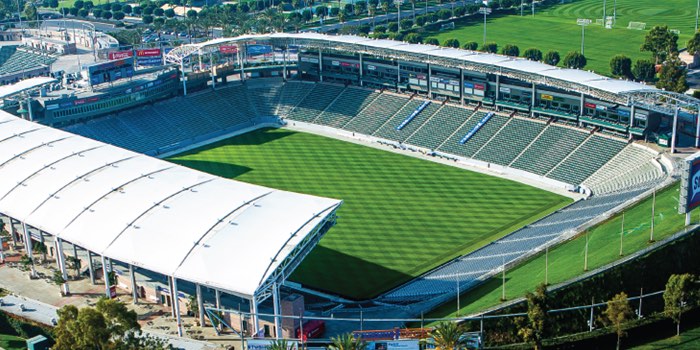 According to the LA Times, Arsenal will play Bayern Munich in Los Angeles this summer, as part of the International Champions Cup.

It’s already well known that the Gunners will be spending summer Stateside, with games lined up in other locations too – there’s an official schedule to be released on March 27th.

However, the report in today’s edition says that we’ll face the Bundesliga giants on July 17th at Dignity Health Sports Park in Carson.

That should then give us a general idea of the rest of the games, but quite where this one fits into the fixture list is still unclear.

It’s quite early in pre-season, as players usually return in the first week of July, so this could well be our first game as we prepare for the 2019-20 season.

We’ll have more on these games as and when we get it.

If it brings in much-needed cash, then we’ll have to be involved in this type of friendly. With a reported budget of £40 million in the Summer, Emery will need all the financial help he can get. He’ll certainly cut some of the deadwood from the squad in the Summer but that’s much more likely to reduce our bloated wage bill rather than bring in any major transfer fees. Who could we sell (without damaging the squad) for any reasonable sum? I can’t think of anyone. Most candidates would have to be sold at a huge loss – Mustafi for… Read more »

Or if we (All Arsenal fans) chip in 5 quid, then we can buy Neymar and Grizman. ?

The wage bill, as a % of income is far too high (we’re paying £18 million a year to Ozil alone). Offloading the players you’ve listed brings it down to manageable levels – but it won’t mean more money for transfer fees, it just gives some wriggle room for new players’ wages. Our new shirt sponsorship deal brings in extra money but it’s not all “new” – we’ve already got a sponsorship deal, so you have to take that off first – and the rest provides part of the £40 million. Unfortunately, there’s very little coming in from additional “Emirates”… Read more »

So your saying we can only make 5m profit this season?

On profits: in the year ended 31 May 2018 we made around £21 million BUT that was down to transfers. I don’t think profits to May 2019 will be very much as we’ll still be paying wages for all the players you mentioned for a start. Even winning the Europa League (possible, but not certain) only brings in a few £ million. The Adidas deal is good news – probably the first really decent sponsorship deal Arsenal have signed – but it will almost certainly be results driven. Are Adidas really going to pay £65 million a season to see… Read more »

also new emirates shirt deal is worth an extra 20m a year. so that covers the previous.

How do you know? Could be 5-1 to thr Arsenal if Bayern continue to be as trash as they’ve been this year. Neuer is Almunia in disguise

The reported £40 million pound budget is made up by the tabloids to suit their agenda. I think it will be closer to what we spent last summer, and possibly more depending on champions league qualification.

An “unofficial” list of fixtures is making the rounds:

July 15 in Denver, vs. Colorado Rapids
July 17 in Los Angeles, vs. Bayern Munich
July 20 in Charlotte, vs. Roma
July 23 in Washington DC, vs. Real Madrid

Take it for what it’s worth.

As a current inhabitant of the US east cost, I would be overjoyed to see them play RM in DC.

“Dignity Health Sports Park in Carson”.
Will Barbara Wintergreen be reporting on the game?

would rather face them in preseason than in the knockout rounds of CL again hahaha :'(

On Bayern and just to reiterate, we have been not aggressive enough negotiating on players. Case in point Ox and Gnabry. We should have put a gun to his head and either had Ox sign his extension or promoted the eager Gnabry in his place. Instead we let Gnabry go to (eventually) Bayern and lost the Ox as well. Situation was similar with Ozil. Instead of committing Ramsey early, we panicked and over paid on wages for Ozi. This was compounded with the failure to get Mahrez (who preferred to move to London and was valued 40m or less until… Read more »