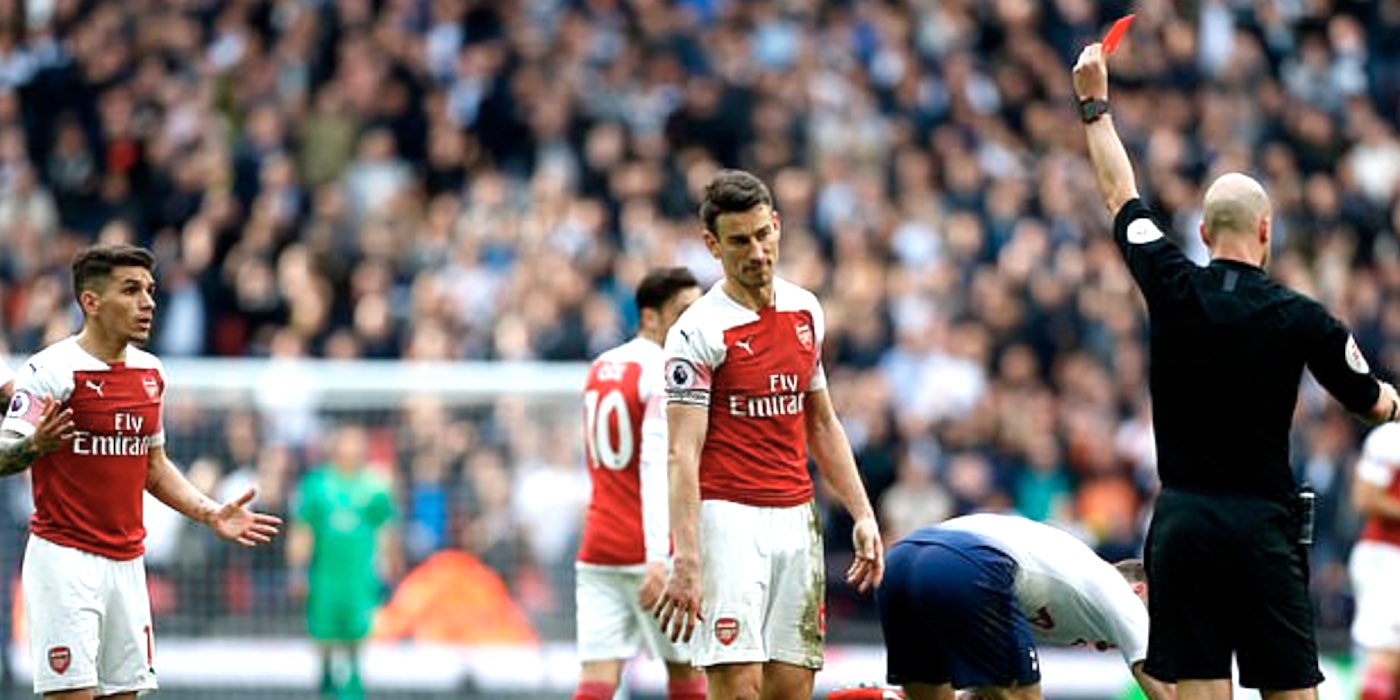 According to the Evening Standard, the FA have rejected an Arsenal appeal over Lucas Torreira’s red card in the North London derby last weekend.

The midfielder was sent off by referee Anthony Taylor for an injury time foul on Danny Rose who had earlier been only yellow carded for a studs-up, over the ball challenge on Bernd Leno who required treatment after taking the force of the defender’s boot to his chest.

It was perhaps on that basis that Arsenal tried to appeal, but the decision has been upheld by the FA and Torreira will now serve a three game ban.

He is available for our Europa League games, but he’ll now be suspended for the fixtures against Man Utd and Newcastle United at home, and the trip to face Everton at Goodison Park.

With a postponed fixture against Wolves and an Interlull, it means that it will be April 15th – over a month – before he’s eligible for domestic action again when we take on Watford at the Elton John Arena.

It’s certainly a blow to our top four hopes but if we can come through these games well, we get a nicely rested and undoubtedly fired-up Torreira to see us through until May.

Doesn’t matter………….he plays v Rennes, who we knock out , and he doesn’t play v Utd , who we beat.
What’s the problem?

Guendouzi will step in nicely. I would probably even play Elneny in Rennes, and save Xhaka for Man United.

This.
Elneny, LT, Suarez, Ozil, Auba and one of the youngsters… for midfield and front. Cech, Kola, Mustafi, Mavro and Jenks…. for the back line.

Elneny not in squad

Because his quality only lies in the figment of some fans’ imagination.

Some fans having a wank over him bc he is a gooner.

Because he sucks. Should sell him but guess what, no buyers.

I completely forgot elneny. Man, he hasn’t played much this season

The problem is he never should have received a red card for that tackle. Further proof the FA is up Spurs backside when none of their players ever get punished for worse offenses

A Different George
Reply to  doug

I thought the red card marginal, but defensible. I thought Rose’s yellow more deserving of a red and my guess is that if it had happened later in the match, Rose would have been sent off. I know referees aren’t supposed to consider that, but they do; none of them (except Mike Dean) wants the whole match to turn on his early decision. And of course, home teams almost always are at an officiating advantage. Taylor is no worse on that score than most English referees. The off-side penalty call and the Vertonghen encroachment are much less defensible than either… Read more »

Jasonissimo
Reply to  A Different George

This idea that Taylor was thinking it was “too early” to send Rose off is completely bogus. He wasn’t thinking that at all. Taylor was trying not to be noticed, and as a result he was seriously weak all match long. I was only surprised Taylor had the cajones to give Torreira the red card since he seemed perfectly willing to let everything else go. But, it did look worthy of one, esp. from his vantage. Rose-on-Leno was a red card all day every day, from 1′ to 90′. Look at the video on the Arsenalist (again) if you don’t… Read more »

What about the player who stamped on our captain. Nothing said about that. Harry Kane got away with murder AGAIN.

Rose should have had a yellow for diving and a red on Leno as well. Ref was terrible

Not allowed to criticise Kane – his social media team tweeted his support for tackling unspecified mental health issues, he therefore wasn’t offside. Apparently we have to thank him.

If I see Sanchez in the street we all know what’s about to happen ?

I will stamp his teeth into his throat…

Inconsistency from the FA? Who woulda thunk?!

No suprise there then.

Who’d have thought the FA would reject an appeal from Arsenal Football Club?

The FA are cunts

I think in general it is a good rule–games should not be re-officiated later. However, the exception for allowing retrospective action (when the referee has not seen the incident) ought to be widened to include simulation even when the referee has “seen” it.

In my opinion it should include both simulation and violent conduct, which is what Rose’s straight legged raised studs were.

That was EXACTLY the kind of brutal violent foul the FA supposedly wanted to remove from the old days of leather ankle boots.

Anthony Taylor is a shit referee and the FA complicit of poor management of games. COYG let’s send back the Spuds where they belong: Europa League!

And hot spurs up their asses.

The FA are useless, Anthony Taylor is incompetent, but we knew this already…
The appeal was silly in the first place, because unless you’re united, liverpool, or that lot, you’re not getting a decision in your favor or something the press could spin and say was bias/ the FA not protecting it’s refs

I don’t think Taylor is worse than most English referees and I always give him the benefit of the doubt because he had the courage to give a second yellow to Victor Moses for diving in a FA Cup final. Against us. So, let’s not get too paranoid.

Unfortunately, any attempt to reason with the FA is likely to be futile.

Unfortunately, too many TV pundits and refs had already called it a clear red and FA were left with every incentive to back their referee. (TV also called Xhaka challenge as a clear red too, so we should be thankful on that score.) I do agree that, on the basis of Torreira red, Rose’s challenge was also red but I felt both were yellows really. Slow motion in VAR may lead to more red cards when live action shows balls there to be played. VAR may have left us at 10 men early in the game and probably not getting… Read more »

The ref is a cunt, Kane is a cunt, Rose is a cunt always seems to injure an arsenal player and gets away with it. Cunt

I know it’s easy to be flippant about this sort of thing but it was only last month a young goalkeeper of 14 was killed in a ‘freak collision’ playing football. The way the FA treat tackles on goalkeepers is a joke and it’s dangerous. I’d rather someone collide with my leg than my head or chest. The commentators during the game were brushing Rose’s challenge off saying “He has to go for that ball”, “The manager would drop him if he shirked that challenge”, “it’s their to be won” and all the rest of it but why is it… Read more »

I agree. Goalkeepers deserve much more protection than they get.

The red card for Torreira was the right decision: it was a dangerous tackle that could have badly injured Danny Rose. However, the Rose tackle on Leno was just as bad and should have also been punished with a sending off. I know that being a fan means being biased, but let’s not be too biased. If Rose had been sent off for the Torriera foul we would not be complaining. What really bugs me about the way that game was officiated was the first, the failure of the linesman to wave Kane offside before their penalty; and second, the… Read more »

You are absolutely right about the officiating on all counts. I am only posting this because I don’t think I have ever agree with you before.

Fatgooner
Reply to  A Different George

Thank you. There’s a first time for everything.??

Are you actually fat, gooner? No disrespect to fat ppl.

Really could have done with Torreira on Sunday… gutted.
One thing I am happy about though, is how well we played against the spuds (home & away) we all know we should have won both – that hasn’t happened in quite a while, so I’m looking forward to next season, when I believe our blip will be over & those little spuds can get back where they belong – in our shadow!! COYG

I suppose they will trot out the line about Rose getting a yellow so no further action can be looked at.

You can interpret Torreira as being out of control, but that is clearly double standards within once game then.

**NO OFFENSE INTENDED TO THE ILLUSTRIOUS SPINAL TAP** (full apologies for this ‘askew’ analogy) The FA in regard to reviewing calls and making things right = Spinal Tap Monkeys Why do I say that? Well, Google tells me that the monkeys with the smallest balls are also the loudest. So, I’m sure that the FA is comparable, in this situation, to monkeys that scream to “11”, the loudest in the whole world…of Football. Ironically, enough, the American top tier Football league (MLS) does what appears to be a very good job of reviewing controversial calls, situations and things missed by… Read more »

It’s a pity that FA treats Foreign players like this. Kean have 2 yellow to miss Arsenal match but FA lift it and he played against Arsenal because his England international it’s just unfair,

Arsenal lost 2 points to match officials that I suspect is spurs fans, let’s count it, Rose / Leno normally supposed to be red card for Rose but officials were blind 2 the penalty was three man offside and officials were again blind,3 Torreiras red should have been yellow but officials see it to be bigger than Rose foul, my question is FA against Arsenal reaching top 4 ?

Ridiculous decision on a 50-50 challenge that Torreira won and at very end of the game.

First against us blatantly offside.

There should be some sort of standards enforced on refs, points deducted on them for poor decisions so if they go Down a certain level, they don’t get to ref at PL level.

A REF league so to speak. Mike Dean wouldn’t survive. He’d be in relegation sooner than he could jump to celebrate a Spurs goal.