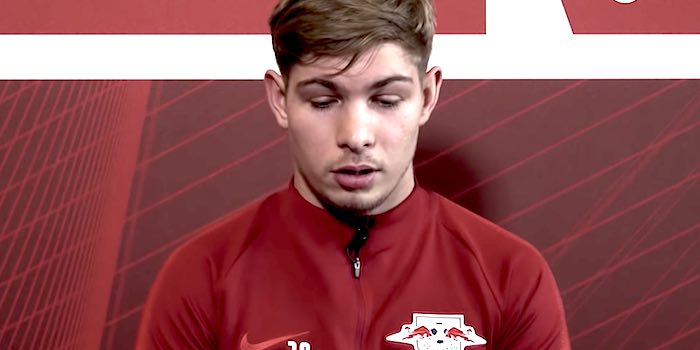 Because of injury Emile Smith Rowe has yet to play for RB Leipzig following his loan move from Arsenal in January.

However, the midfielder says he’s enjoying his time at the club, and he’s learning a lot from his time in Germany.

The 18 year old enjoyed some fine moments in the first half of the season for Arsenal, scoring three goals for the senior team, but it was felt he could use a move to help his development.

That has been curtailed by an ongoing hip problem, but the youngster is clearly making the most of his time with the Bundesliga club.

“I’m delighted to be here, everyone’s been very welcoming,” he told their official YouTube channel. “It’s like a family here.

“Personally, I think it was going to be a great experience to get minutes in the Bundesliga and it will help me in the future to become a better player and a better person.

“Moving to a new country for four of five months is a good decision to me.

“I’m focusing on getting stronger and whenever I’m ready I guess I’ll be ready to play for the team. Since I came here everyone’s been very friendly, most of the lads speak English as well so that’s definitely good.

“I’m learning German … slowly! … but I’m definitely enjoying it at the moment.

“The goal is to get fit and focus on the rest of the season. I’m having one on one sessions with some of the coaches, they’re teaching me the tactics and helping me with German as well.”

There are suggestions that he might stay there for next season too, but much will depend on what Arsenal do in the transfer market this summer, and how ready Smith Rowe is deemed to be by Unai Emery.

With Aaron Ramsey and Danny Welbeck leaving, there is a need to have homegrown players in the squad, and he’d certainly add to that quotient.

In the meantime, let’s hope he can get fit and make an impact for Leipzig between now and the end of the season.

Certainly a solid replacement for Ramsey

Maybe not yet unfortunately

He must be dissapointed not to be playing

Should have went somewhere he could play. Championship maybe or a lower Euro league. Don’t they put conditions in these loan contracts that player must get x mins or something?

He’s injured not that RB Leipzig is not playing him… Read the article before commenting for fucks sake!

Mistafi, be sure you’re not in the penalty box before you pull an opponent.

Personally I find the loan a bit weird. He went there injured, we brought in Suarez and neither are getting significant game time. Seems like it might just have made more sense to keep hold of him. We aren.t exactly overloaded in that wide attacking position. And surely he would benefit from training with the likes of Ozil,Mkhi, Laca etc

Agree. It’s not like he looked out of place in his appearances earlier in the season, either. I don’t see how Suarez is an upgrade on him at this point.

If you start regarding footballers as human beings then there’s a lot of benefit to his development. He gets to go abroad, experience a different footballing culture at a young age. Train with a slightly different setup, helps him get more perspective… All of that helps a person with confidence and maturity. This will help him in his game, this develops the human. This waters the human. Yes. We must water our players with such nourishment.

HAHAHA this is hilarious.

I personally disagree. There is a role in the squad for a back-up attacking player – whoever that is is unlikely to get much game time. In that case I’d rather bring in Suarez to fill the position and send ESR somewhere where he will get game time (once fit) to allow him to develop.

On the long-run this is definitely the right move for the club.

Suarez is on trial.

No obligation to buy.

Smith-Rowe also under consideration. One suspects he’s still got a season or so before full breakthrough. Another strong loan may shape him quicker.

To sell : Elneny and Jenkinson.

Very nice of them to look after our injured player!

Very nice of them to look after our injured player! Not sure what’s in it for them…

Did I miss the story about welbeck leaving? I know he’s in the last knockings of his contract but I didn’t realise a decision had been made

I think if we let him go it’ll be solely due to injuries. Which would be understandable I guess. But to replace him with a similar quality player is likely £30-40m in today’s revoltingly inflated transfer market (for a big English team).

He will be their Kim Kallstrom

Him and Nelson certainly big potential

Personally felt we could have used Nelson this season.

Could gave covered Rback (as he did for Soton) plus right side of back 3, instead of spending 90k per week on Lichsteiner.