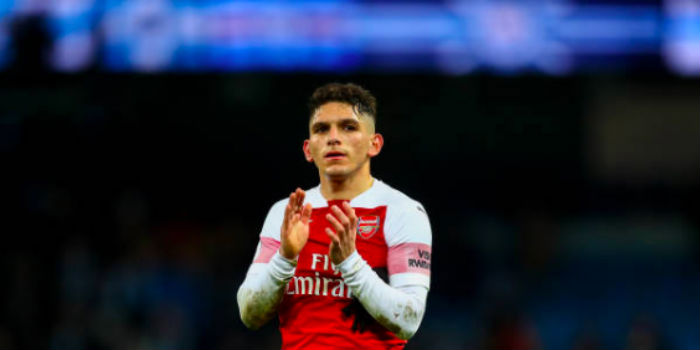 Lucas Torreira says he’s pleased with how his first season in English football is going even though the regularity of games initially came as a shock.

Since signing from Sampdoria in the summer, the Uruguay international has made 39 appearances for Arsenal – the joint highest in the squad alongside Alex Iwobi – earning in the process, cult favourite status for his tenacious performances.

While the little midfielder has increasingly been rotated in and out of Unai Emery’s starting lineups in recent months, he’s still pleased with his development.

“I have to say at the start, it was a little difficult because it was a completely different league. I was used to the Italian league, which is a very intense one.

“However, we were playing once or twice a week there, whereas at the start of this season here, Arsenal were playing every once or two days, so that was quite difficult.

“However I’ve been helped greatly by all the people at the club, and with a lot of hard work and sacrifice, I’ve managed to develop.

“I’m very pleased that I’m one of the players to have made the most appearances at the club this season.

“Having said that, the most important thing now is that we finish the season in the best way we can.”

The Gunners head into tomorrow’s game with Rennes knowing they need to score at least twice to secure safe passage to the quarter-finals. Against a well-organised side who’ve already proved they have the flair to upset the odds, it’s going to be a tough ask.

Despite the uphill challenge, Torreira is optimistic. “Obviously, we had the situation in the last round [against BATE Borisov] where we had to turn the tie around,” he said.

“I think in terms of the game last week it was a very different game until the red card to Sokratis.

“I think we were in control of the match and we’d obviously taken an early lead, but the red card did change things and Rennes were able to take advantage of things.

“That said, we do have confidence that we’re going to give a very big performance tomorrow and go through to the next round.”

It’s a funny old culture but I think Lucas is getting the hang of it. Play really well until expectations are raised and then go missing for game after game until the supporters turn against you. Repeat this pattern until you secure a lucrative free transfer and start playing the best football of your career.

What ever it is mate, it’s not that bad. Chin up eh lad

If you’re referring to Ramey then you are talking utter nonsense. Out player of the year last season has always given if his best and don’t forget it was Arsenal that revoked the contract and allowed Him to leave

I love him.. and that goal & celebration against the spuds ?

What a gem of a player. The Uruguayan N’golo Kante

Some people like to believe he is better than he is much like they believe Mustafi or Flamini were responsible for more mistakes than they were.

He’s made a number of mistakes this season leading to goals.

There’s also a reason why Granit is played more often.

Too many people have no sense of reality.

Give it a rest honestly. Your ‘know it all’ tone is cringe-worthy.

Quite. He’s almost worth a place in the squad on his attitude alone. Players like that are needed or wanted by every club. Skills are nice but they’re not the only thing that wins games.

? He’s played more than Xhaka this season (clues in the article). Are you okay? Maybe trouble with the wife cheating or something. Sensing a lot of hostility.. This is a friendly forum 🙂

I absolutely love him and I’m pretty sure he will become a legend, if he stays with us over the next years, but what I don’t really get is that whenever he makes a mistake, people blame it on the new culture and the fact that he’s not used to play without a winter break. But if Guendouzi makes mistakes (who also is playing in a new country and also isn’t used to play through the entire season without a break – and has even played more minutes than Torreira) everybody blames that on his age and says he’s playing… Read more »

Disagree. He was terrible in the 1-5 against Liverpool for example. He had quite a few really bad games. Guendouzi has difficult moments but generally he hasn’t been really bad over 90 minutes yet in my opinion.

Which is worse IMHO. Anyone can have a bad game. But if you have a player who can drop a mustafi at any moment then fans and players are constantly questioning; when? Teams do it to us all the time. When Xhaka joined he had his first wobble and the next few games our opponents hurried him on the ball soo much. Recently you can see the same happening with Guendouzi. I think the opposite happened with torreria, opponents have found out he will tackle his nan if she had the ball and so are afraid of playing around him,… Read more »

Agree. He has made a number of poor mistakes.

He made poor passes or was robbed off the ball 3 or 4 times against not only Liverpool but BHA, Soton away and at West Ham, all of which directly led to goals.

That has cost us at least 8 points.

Pretty sure the West Ham one was Xhaka’s fault.

I love both and mistakes happen. I don’t have a problem with it at all. My point was just that both get different reactions when they make mistakes. But both have been extremely good since they joined.

Does anyone know how his English is?

Is it true that emery was given little money for buying players come next season?

He hasn’t been plain sailing. Coming back from injury, he was liable for a number of balls lost in m8f field through misplace passes or getting robbed, 3 of which led directly to goals at BHA, Soton away and Liverpool. But he is prob the best pairing to Granit. The Swiss has improved defensively putting in a great block last game but is also pivotal distributing the ball and switching our focus of attack quickly from deep. What Torreira does is ferret and sweep up the lose balls in between. It’s a good partnership that strengthens their merits whilst covering… Read more »