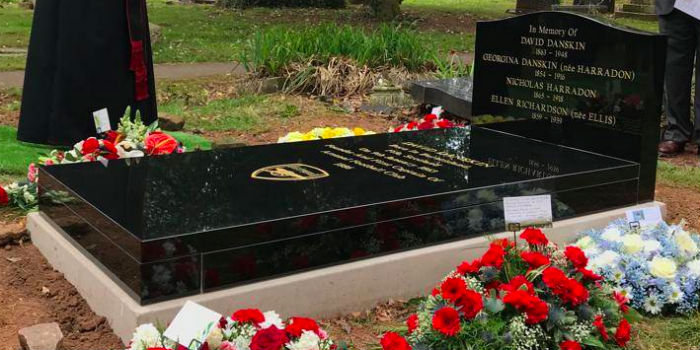 In December, we reported that Arsenal were planning to pay tribute to David Danskin after it was discovered the Scot, who was one of the club’s founders, has been lying in an unmarked grave in Coventry.

Yesterday, four generations of the Danskin family were joined by the Arsenal Scotland Supporters’ Club and members of the Gunners hierarchy, including Pat Rice, for a service that culminated in the unveiling of a new gravestone.

Born in 1863, Danskin moved from Fife to London in 1885 and took up work at the Royal Arsenal munitions factory in Woolwich. A year later, he and a few of his fellow workers contributed funds to set up a football team. Originally named Dial Square FC, after the park in which they played, the team soon changed its name to Royal Arsenal.

He gave up playing football in 1890, just before Arsenal turned professional, and went on to carve out a new life running a bicycle manufacturing business in Plumstead before he moved to Coventry to take up employment with the Standard Motor Company. He would witness the Gunners winning 6 league championships and two FA Cups before he passed away age 85 in August 1948.

After the commemorative service, Arsenal’s managing director Vinai Venkatesham said, “Arsenal was born out of a sense of community and that is something we hold true today as much as ever.

“The millions of Arsenal fans around the world will always be indebted to David Danskin’s vision to create a football club. We’re pleased that at last his final resting place has been properly recognised.”

Well done to all concerned,a rare good news story for the club.
If Ajax hold on, even get another, that will be the best news possible!

Please move to the side with this in the future.

Heartening to see the club still has a touch of class despite having an absentee owner, the perception of whom appears to be more preoccupied with the bottom line rather than what the late David Danskin and his co-founders of our club doubtless envisaged – a sporting entity engaged in the glory game as opposed to a money-making corporation.

This is great to see, is there any info out there on what he thought of what Arsenal became after he left? Must have been incredible to see the team he formed with a few mates from work go on to be one of the biggest clubs in the world in the 30s

His story and arsenals tribute I find very moving Thank you David Danskin.

I a sure there are literally hundreds of thousands of Arsenal fans around the world who second your opinion. Lovely tribute by our truly “class” club.

Class. RIP Mr. Danskin, and thank you for helping to forge the club we support.