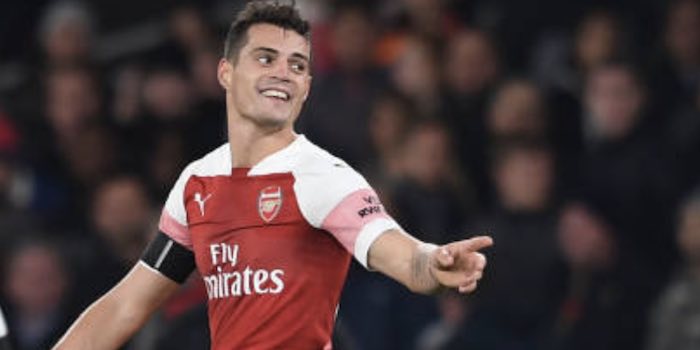 Unai Emery has confirmed that Granit Xhaka and Laurent Koscielny are struggling to be fit for Thursday’s Europa League quarter-final tie with Napoli.

The Swiss and Frenchman, suffering from groin and foot injuries respectively, were both absent as Arsenal stumbled to a damaging 1-0 defeat to Everton in the Premier League on Sunday.

After the result at Goodison Park, Emery revealed that he’s still not sure if the midfielder and defender will be available this week.

“I don’t know,” he told his post-match press conference. “Maybe Laurent could’ve come back to play today but yesterday we knew it wasn’t possible. I want to be positive for Thursday but it depends how he’s progressing.

“Xhaka is the same. They are doubts for Thursday. We have players and we know we can produce the performance with all the players.

“When you lose a match, maybe you can look at the players who didn’t play, but it’s rarely the consequence. We’ve won matches with other players, other systems, and we need to be efficient in each moment. We need to be consistent like we are a lot of the time, but sometimes we can lose.”

Lucas Torreira, suspended for three games in the league, will return to the squad on Thursday.

Looking further ahead, Sokratis, having picked up his 10th booking of the season, will now miss the Premier League clashes with Watford and Crystal Palace.

Here’s hoping Laurent is fit inside eight days because the prospect of Mustafi marshalling the defence isn’t one that fills us with confidence.

Xhaka: I want to give back to Arteta in every game

It never rains … etc. The Napoli tie is likely to be really tough. I saw them play a few months ago while in Italy and they are a good side – far better than Bate or Rennes, and we made quite heavy going of it against them! We’ll have to make the most of the home tie, as it will be rocking at the Stadio San Paolo which has about the same capacity as The Emirates. If we repeat anything near the level of performance vs. Everton today over the two legs, we’ll almost certainly be out.

We’re missing Xhaka in our ability to progress play massively. Hopefully he’s back and fully fit as soon as Thursday!

I’m less worried about Napoli, as Torriera will be back and Sokratis can play. If they are not 100%, I’d rest them.
Watford without Kos however, that could be a problem. They will be on a high after that FA cup semi comeback.

This is going to be potentially our undoing. As I said beyond a certain point, even with numbers available the quality of the squad falls away steeply. Midfield is an issue without Granit. Torreira has been OK but hardly the force some people would deem to suggest. Fullback even AMN was poor today but beyond him Jenkinson and Lichsteiner even poorer choices. At Cback, Sokratis may now have played himself into suspensions not what we need at this stage with Koscielny still knocked. How some people can wet dream that he should be around next season is beyond me. The… Read more »

Lichsteiner is only on a one year contract so either way he’s going, Mustafi on the other hand is far worse than deadwood, he’s a fucking time bomb that resets after every explosion + considering his cost, wages n performance I’d reckon he’s doing way too much harm than good! So who do you think is in lala land now??? ?

Emery shd take a leaf from teams that play against Arsenal.Sit deep and
hit ion the break like Everton.The trouble is the gunners always have aproblem
playing such teams and invariably lose.
For a change ,let them attack and counter attack at speed.I have it happen.
Against Napoli it will be tough. Ancelotti is a master tactician.When he was at BM,the Germans beat Wenger 5-1 home and away.
Emery better match the Italian master tactically.

Phil Collins, I mean do you not even like the song “In the Air Tonight”, that’s a classic right?? Maybe in general he’s not your cup of tea, but that’s a great song, when the drums come in, it’s inspirational, no?

Oh the football… that was shite, so trying to find something else to discuss. 🙂

If he plays the stop and pass he will play into Napoli’s hands.
Why are MC top of the tree.They do pass but they don’t stop and pass excessively.
Why not pass with the gunners running into position like whet are
our striker did to score against Spurs ?

Arsenal’s inconsistency throughout the season will be there downfall for next season’s Champions Leagues, they just blow hot and cold, losing away games is there Achilles Heal. Top players just switch on and off at will.

What happened to young Dinos? Maybe it’s his time to be unleashed?