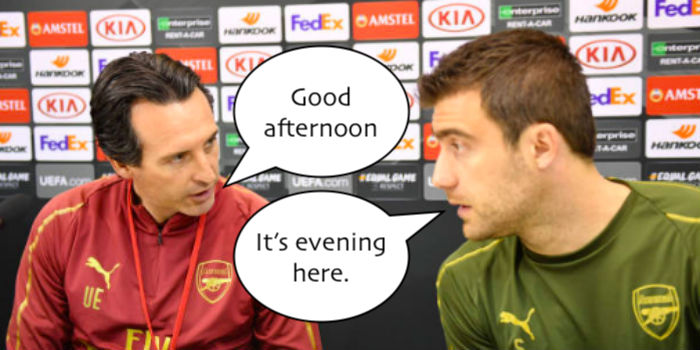 Unai Emery says he’s been very pleased with Sokratis’ contribution this season and hopes the Greek’s experience will prove handy when Arsenal face Napoli in the San Paulo’s feisty atmosphere.

The 30-year-old missed Monday’s win over Watford due to a two-game Premier League suspension, earned for picking up 10 bookings, but is set to be restored to the centre of defence tomorrow.

Asked whether his summer signing has grown in stature as the campaign has progressed, Emery said: “I think the adaptation first is important and not easy.

“It’s different for different players. We spoke about that with Papa in pre-season.

“His adaptation was with the time and the training, the matches are different in England.

“He took the big performances to help us like he is now.

“We are very happy with him and tomorrow is a big match so we need players with experience. He’s one of those players.”

Emery also praised Sokratis’ attitude to his work. “I have the confidence in every player,” he added.

“In this moment, every player wants to play, wants to help us, the behaviour is very good every day, the commitment to work and to be ready is fantastic.

“All the players that we have ready to play, like Papa because he was suspended in the Premier League, their commitment is fantastic.”

Tackling Napoli on their own patch won’t be a new experience for Sokratis. After Serie A spells with Genoa and AC Milan, he knows all too well how difficult it’ll be to close out the second leg.

“Tomorrow we have to play like the game is 0-0,” the Greek told the pre-game press conference.

“Napoli is one very good team. It will be difficult for us but we have to be focused for 95 minutes and to do our work, our style of the game.

“The atmosphere will be very good and I already played a lot here. For us, I don’t think that will change anything. We have experience, a good team, and we trust ourselves.”

Surely with all the luck Sp*rs have had this evening we can’t make them happier by going out?

What happens if they do what we couldn’t by beating Barca in the final?

I’m sure none of us want to see that, but it’s a fact that they could win the CL this season, and we certainly can’t. We’ve a deal of improving to do yet, even if we end this season on a relatively successful note.

It was a good game tonight

Not that disappointed to see Oil go out

We can’t have sp*rs winning it though

VAR will solve the problem
Reply to  Anonymarse

It was one hell of a game. Was ok with the idea of Spu*s going through just only to see the oil shiekhs fail with their projects. But when Starling put that one in in the last moment…i just laughed so hard thinking Spuds probably had done what they do best and bottled it like they always do. Was kinda short lived as it turned out. Hopefully this just prolongs the inevitable and they get thrahsed by Ajax. What a story that would be if Ajax wins the UCL! At least the results works for us, cause City will definently… Read more »

FMT
Reply to  VAR will solve the problem

I doubt City will be able to beat Spurs this weekend. I strongly doubt it. It’s very difficult to raise yourself after that kind of game and with the manner of the loss.
In fact, I fear to say the league belongs to Liverpool now and Spurs is gonna get the 3rd spot.

I dunno. I’m hoping it gives City the impetus to get fired up and see revenge. They also need to put all their focus on league for major trophy. There are a few experienced folks in that City team. Pep won’t let them wallow.. sure he’ll give a good Pep talk…

Man City will destroy them…I’m tempted to say I will get a tattoo of Harry Kane’s face on my bum if they don’t….but nobody wants to see that!

Arsenala Vista Baby
Reply to  VAR will solve the problem

Well, I guess that we have to hand it to them, however grudgingly. Regardless of whether they progress any further in the CL, it could have implications for us as Stan K will be watching closely at what they’re doing – and, more importantly, how they’re doing it on close to £100 million a year less in wages than we’re paying. I think we’d have to admit that at the moment anyway they are getting “more bang for their buck”, as Stan might say.

Don’t forget that spurs didn’t even sign a single player this summer. So if they wins the CL, God knows if Stan K will even think of investing the rumoured 40-50m that we are thinking he will spend this summer.

Spurs have a good 40% chance of winning the CL now. Yes they’ve been lucky on the way – but you need that. What has allowed them to overtake us in recent times is the focused aggressive and committed intensity of their management / ownership group vs the passive greed of Gazidis and co. We may hate watching it happen but my silver lining to them potentially winning it is that I think Kroenke and others will see the huge commercial threat that has emerged 2 miles down the road, and know they have to react if their ‘asset’ (our… Read more »

A Different George
Reply to  Gunner142

They are about to lose their best defender, one of the best in Europe, Alderweireld, on a free. If they don’t win a trophy this year (which can only be the Champions League), they are likely to lose Eriksen, and not long after, Kane and their manager. I think, if they are lucky, they will do what we did after our new stadium: cling to top four, depend on Champions League money, sell their best players, including to rivals.

Need to sell Jenkinson but who will buy him.

Squad for Napoli defo the wingbacks AMN and Kolasinac.

Backline likely Mustafi- Sokratis – Monreal or Koscielny (depending on fitness)

Middle of the park if Granit may need a rest from recent return. Torreira- Ramsey-Guendouzi IMO for energy hustling.

Up top Lacazette and either Auba or Ozil supporting act.

Rotation if business is done and we need to reserve for Palace which comes up in quick succession.

Selling players will be an important source of additional income for Emery in the Summer, especially if we don’t get a CL place. However, the players we’re likely to want to sell probably won’t attract many potential buyers, or not buyers prepared to pay good money. Among them will probably be Jenkinson, along with Chambers and Mustafi. I can’t see that selling these three will bring in a fortune though. When you buy high and sell low it’s not good business, but there we are.

True, but it will clear a couple of hundred grand a week off the payroll

Some people heads up their arse. Mavropanos is massive potential but frankly he needs to go out on a strong loan next season to accelerate his development.

Meanwhile worth pointing out again much maligned Mustafi led the team in duels won (11), aerial duels (7), Clearance (5) and intercepts (4) but somehow some people only have eyes for Koscielny.

Far from reality but its what they want to see.

Suarez took his place for Europa.

It definitely isn’t worth you noting how Mustafi ‘isn’t as bad as everyone says’ like you know better than everyone else (which if you did, you’d know Mavropanos is NOT IN THE EUROPA LEAGUE SQUAD). Please, for everyone’s sanity, change the record

Mustafi is great at some defensive requirements but as we have all witnessed seemingly countless times, he gets caught with his head up his ass too often, goes to ground and doesn’t back up other defenders nearly as well as an Arsenal CB should.

I see he’s added 5 minutes of extra time – I’m guessing that’s because he is planning some robust challenges so that we keep another clean sheet away from home.

The Manc – Spurs game last nite was crazy. I doubt City will be able to beat Spurs this weekend. I strongly doubt it. It’s very difficult to raise yourself (mentally) after that kind of game and with the manner of loss.
In fact, I fear to say the league belongs to Liverpool now and Spurs is gonna get that 3rd spot 🙁

At the end of the day though, our fate is (still) in our hands to get a top four finish, even if it is fourth behind the Spuds. If we do mess it up, and I really hope we don’t, it’s down to the coach and players – nobody else to blame.

Good morning everyone, did I miss anything much last night? Anyway, onto important matters, Napoli will come out of the blocks so I hope we are prepared for that and hit them on the break to get an early away goal – that’d take the wind out of their sails!!!

Let’s hope Sokratis not only uses his experience and plays well, but stays on the pitch for the whole 90 minutes … we must have cool heads against Napoli.