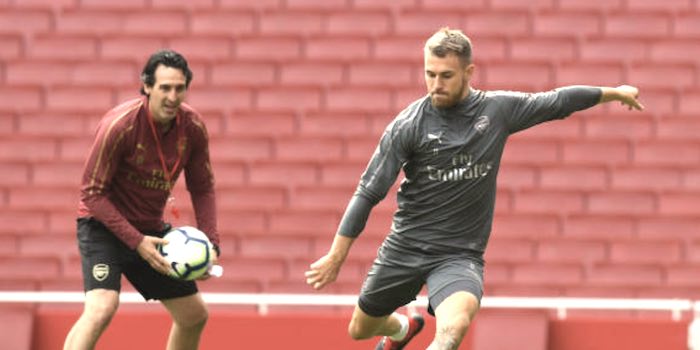 Unai Emery has hailed Aaron Ramsey as ‘amazing’ as the Welshman seeks to make a final mark on the club before he leaves this summer.

The Welshman will join Juventus when his contract expires in June, and uncertainty over his future played a part in him spending more time on the bench this season than maybe he should have.

However, since everything has been clarified the midfielder has found some of his best form, and the Arsenal boss impressed with what he’s seen from him.

Speaking ahead of Monday’s Premier League encounter with Watford, Emery revealed conversations between the two over the course of the season.

“I was speaking a lot with him and also when his future was the conversation between the club and between him,” he said.

“We need his approach and his focus only on us for the matches. It’s not easy for him and after he signed [for Juventus] to finish thinking about his future, his focus is to help us and his attitude is a very amazing attitude towards each training session.

“He is available for each match, playing in different systems and different tactical positions for him.

“Now, I can say, I am very happy with him. I continued speaking with him to do something very important in the last matches here in two competitions that are very important for us and with Arsenal.

Let’s hope he can stay fit between now and the end of the campaign, and if he can grab us another cup final winner he’ll leave on a real high.

He blocked me on Twitter when I called him “Penis Morgan” 🙂

It’ll be a sad day when he parts for Juventus

I’d love nothing more than for Piers Morgan to leave for Turin.

There are other less pleasant places I would rather he went

If Aaron Ramsey doesn’t get the heroes send off he deserves in his final home game I will be amazed. Two FA cup winning goals and some incredible memories and other fantastic goals as well. A true professional, the club offered him a contract and then withdrew it which obviously upset him at the time, he knows he is leaving for Juve at the end of the season and yet he is putting in these incredible performances for our club every game. After the contract thing many players would have thrown their dummy out of the pram but this guy… Read more »

Who the fuck voted this down?

Agree to disagree, mate. He’s not a legend.

i would say him and kos are the only legends from this era.

We are in decline. every aspect of the club is no longer the top of its field.
therefore achievements needed to qualify for legendry status are less at the moment

did ramsey set the world alight like pires, henry or bergkamp? not exactly.
has he reached a bar no others have reached in his time here? id say so.

i’d also put Jenks down as a legend.
not a statue worthy, but one that will come up in pub conversations or obscure quiz answers 20 years from now, a player people will remember and remember fondly.

So what do players need to do for you to consider them a legend? Tough crowd.

How is he not? He literally won us two FA Cups in our most barren years post Invincibles among all his other accomplishments. He’s never kicked up a fuss or talked shit about the club, and always gave 100% whenever he played. He came back from a horrendous injury that could have ended lesser players’ careers.

Ramsey’s Arsenal heart is amazing…
Then why let him leave?

I tell you another thing that’s also amazing: a top European club allowing one its best players to walk out the door for nothing. The senior management must be outstanding!

The sad thing is that he won’t be replaced. The £45 million that the club are going to spend this summer will just about get us two Guendozis.

After the weekend’s results a top-four finish is now looking very much less likely. We’ll have to win the EL to make it to the big one.

Too early to speak on our top 4 hopes, but you’re spot on about how we’ve managed the Ramsey situation. It’s one thing letting your best players go for a decent fee, it’s totally another thing to let them go for free! There doesn’t seem to be a lot of accountability at the top of the club; in almost any other organisation, losing assets of that size for nothing would be a sackable offence.

By your own logic, that 45m would get us 5 Guendouzi’s? Or am I missing something… How much do you think he’s worth now?

Sad to see him leave. May b he was not always consistent and injured a lot when we really needed him. But always gave his all when on the pitch and tried to make things happen. Frustrating sometimes but always an admirable personality.

Arsenal legend? I would say yes. He won us the first trophy after such a long barren spell and the first one after our move to Emirates… the case will only be stronger if he helps us win the Europa league.

On a different note, yesterday’s games gave me two observations:
1) What’s the point of Huddersfield? They might as well as given the spuds (reserves) 3 points and told them both not to bother. Pathetic.
2) Manchester United’s luck will get them a top 4 place. I’m not going as far as saying brown envelopes are being passed around but something very shady is going on there and has been for years. Fortune runs out eventually when you are over reliant on it, yet theirs never seems to.

As long as we keep winning they won’t get top 4, at least not at our expense.

So hopefully we can get the 4 wins required to secure 4th place.

Still hoping United will bomb right at the end. Would be funny.

Arsenal messed up big time to let him go. The money they will use to replace him, why can’t they use it to improve his contract. To have a such player in the market is hard to find today.

This might probably get me some down votes, but why would Ramsey not want to shake Piers Morgan’s hand. From the comments, I know Piers Morgan is seen as an annoying person, I don’t know why though.

I am more interested in why Ramsey sees him as an annoying person and I would love it if someone cured me of this ignorance.

santori
Reply to  Dispossessed by Torreira

You don’t know why?

Piers Moron is a complete wanker unsettling the club with his sniping from the sidelines, spouting absolute rubbish.

Purports to be a gooner but generally does us no favours.

Anyone who has Arsenal at heart recognises this.

Also Piers has been slating Ramsey especially for the last 10 years, constantly stating that Ramsey is an awful player.

I think this is what we will miss most from Rambo. He seems such a natural candidate at the moment for the Captaincy. He’s been at the club most of his career and he knows what it means to wear the shirt. Always comes in with big goals. And his attitude on the pitch always grafting is examplary. That’s what is hard to replace beyond capability. Its a shame cause we do need one more deep midfielder. Granit-Torreira are an obvious pair complementing each other. Guendouzi is a developing player with great promise and the same sort of verve as… Read more »

Ramsey (unlike a certain Dutch Skunk) is smart.

He knows even when he is leaving he can attain legendary status.

Its the demeanor and the way he has conducted himself that’s key. It has not been want for love of the club.

BUT if he can win us third at expense of Spurts this season and an unprecedented Euro pot, that would be a fitting parting gift plus his long service enough to ensure a solid legacy with the club.