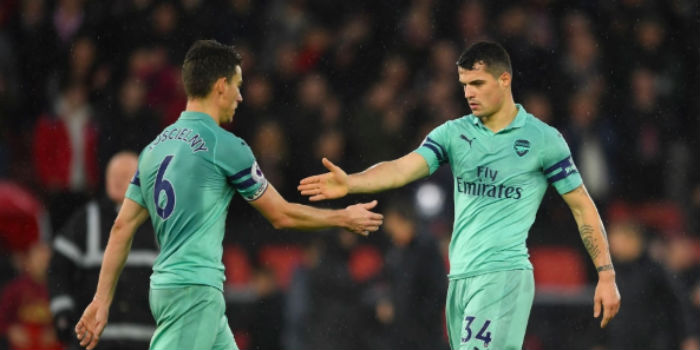 The Arsenal medical team have posted their latest fitness update and it sounds as though Granit Xhaka and Laurent Koscielny are still doubts for the clash with Napoli on Thursday.

Unai Emery touched on the status of the duo after Sunday’s defeat at Everton hinting that the Frenchman, who is suffering from a bruised left foot, looked closer to a return than the Swiss.

Perhaps we’ll get more details later today when the Spaniard faces the cameras in his pre-game press conference.

Xhaka’s absence, the result of a groin injury picked up during the Interlull, could be offset by a return for Lucas Torreira who isn’t suspended in Europe.

In defence, Nacho Monreal, Shkodran Mustafi and Sokratis will likely make up a back three if our club captain isn’t able to play a part.

Despite his flaws, Xhaka is really important in our Midfield

Despite his age, Kos is really important in our defence

Exactly. He’s not quite a world beater but he’s on a different planet to Elneny, no offence to him. Don’t really have anyone else that can do his job effectively in the squad, bar arguably Torreira.

The past seasons the main flaw of Xhaka was having Ramsey “close” to him, living his own game without caring of his positioning.

Am I mad in thinking it might be better if Koscielny doesn’t play, considering it would be good to have him available for Watford? I just don’t think him playing 2 games in a week is a good thing at this point.

Let’s hope that both are fit: we need them desperately. It’s been an interesting few days, hasn’t it? On Sunday we stank the place out at Goodison Park and were lucky to only lose 1-0; and with the others around us all winning, suddenly a top-four finish is beginning to look less likely. Unless we sort out our away form we can kiss automatic qualification goodbye. Then yesterday Spuds beat City to give themselves a great chance of a semi-final place. Remember all those years when we couldn’t get past the last 16? It’s amazing how “financial doping” hasn’t stopped… Read more »

Really hope the rest has done Lucas some good and he’s can replicate his early season form.

It’s vital that he destroys Napoli’s attacking threat. The last thing we need is them grabbing an away goal or worse, given how shite we are away from home.

I saw Napoli play at their ground a while ago and they’re a competent side, with fanatical support. Given our clearly awful defending record away from home (in both the EPL and Europe, worse luck), I wouldn’t be anywhere near confident without a two goal cushion in place for the away leg.

Napoli are likely to be tough, and I doubt the odds are very much better than 50/50 getting past them over two legs. We need as full a strength team as possible against them (in both legs), particularly as we don’t have the advantage of the second leg at home.

At least Torreira and Sokratis can play.

True. In the case of Sokratis, given his poor disciplinary record, I guess that the question is – for how long will he play? Anyway, hopefully they’ll be no silly bookings or, worse, red cards.

Let’s hope it helps in that regard that we’re not playing Barca.

I’d rest Koscielny for the league matches coming up when Sokratis is suspended. Make sure the old war horse is fully recovered. These are wear and tear issues with age which is why it is ludicrous that some think we will retain him another season as much great as he has done for us. With regard Granit, he will be critical against Napoli. He changes our focal point of attack very quickly and has been far more careful/robust in keeping the ball this season than some lazy (usual) Arsenal ‘critics’ care to give him credit. AGAIN fitness is key though.… Read more »