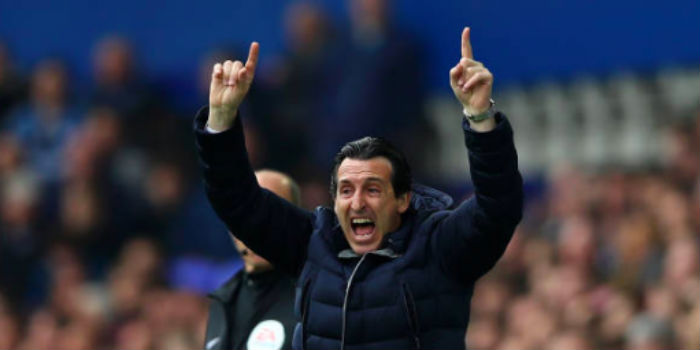 Unai Emery maintains that Arsenal are still in a decent position to finish in the Premier League’s top four despite a 1-0 defeat at Everton further highlighting the difference between his side’s form at home and away.

Six of the Gunners seven defeats in the league have come on the road and with tough matches at Watford, Wolves, Leicester and Burnley making up our final six fixtures, it seems clear that away form will decide whether or not we dine at Europe’s top table next season.

Asked how he plans to stop poor away form from ruining the run-in, Emery attempted to accentuate the positives and to look ahead rather than back.

“Generally we are good,” he told his post-game press conference. “I don’t think that we lost today because we were very bad.

“I think It was a bad result and not a good performance, but we are still fourth. We wanted to leave here in third position but we are in fourth.

“I knew it was going to be difficult before and after the game I think the same. We lost an opportunity and today we didn’t show our best performance.

We didn’t impose our gameplay against them. We are thinking about our match on Thursday and the Premier League game against Watford away.

“We need to be consistent in the next matches and if we do that we can win. There’s some frustration collectively with the result, but we won’t change our idea and our work.”

He added: “It was a good opportunity to take three points today and continue [in third] in the table, but after the result we are fourth.

“We need to be consistent in 38 matches but we lost that consistency today. We will have more chances, more opportunities in the next matches. It depends on us and also on other teams.

“After this result, we can be negative because it’s three points lost, but it’s in our hands to continue to take chances to be in the top four.”

As YankeeGunner said on Twitter, very few teams can grind out a result no matter how many key injuries they have: our first XI was without Xhaka, Torreira, Kos, Bellerin, Ramsey and Auba (with only the latter arguably fully fit to actually start) today.

That being said, we probably played close to the level of the team we put out there.

Xhaka, Torreira, Kos – all soon to be back – will give us a huge boost hopefully. Let’s do this!

It’s crazy! No movement, no effort, so no rhythm. Some players tried for a bit and soon they gave up too – Lacazette, Ramsey and Iwobi! Leno and Socrates did their job. For the rest, if we had enough depth, none of them should start the next away game. However we don’t, so hopefully Emery can get these professionals, to put in a good shift. Unfortunately Socrates is banned for 2 games now, hope Kos, Xhaka get back soon and Torreira finds his form again. I really think Guendouzi is the future but he is not present for the next… Read more »

It’s in our hands??? Why do we always screw things up then have to rely on other teams around us to drop points??
When the going gets tough we go AWOL…
I’m gutted & will be absolutely gobsmacked if we make the CL next season

Looking at the remaining fixtures, I think Spurs will get 3rd and Chelsea will get 4th. At least 6th still gets Europa League due to Man City winning the League Cup. I just hope that a big Champions League club doesn’t bid for Lacazette or Aubameyang in the summer…….

Can we see if Juventus want Ozil instead of Ramsay. He was absolutely diabolical today.

It’s Ramsey. Ozil was far from our worst player today but of course he is always the scapegoat. He’s been on great form recently.

Emery did not have much choice today in terms of the midfield but I personally would of preferred playing Maitland Niles in his more natural position of central midfield and put him in partnership with Ramsey. Of course that would mean selecting a different choice of right back/ wing back. In despite of all his criticism, I think he could of played Jenkinson there and at least we would have a more versatile player in defensive midfield in AML to cover. I think in the first half we lost the combativeness in midfield which AML and Ramsey would provided more… Read more »

Maybe top 4 but carry on like this not for long.

Plus the aspiration MUST be ahead of Spurts and top 3.

Sure it’s still within our grasp but it just got a lot harder.

Really?The gunners away record is cause for concern. You can bet teams like Wolves will try to get something from their season by beating the gunners.There are no easy games in the epl.The defence since Wenger’s time has been a perpetual problem.He didn’t bother about fixing it thinking his cavalier attack will win games. The problem is if you don’t have a strong repeat strong defence you are going to undo the work done by the attack. This game reminds me of the time when Wenger faced with such teams had no planb.Suffice to say when teams sit deep and… Read more »

I think we can safely say Suarez is guy for next season or is it?

If he couldn’t replace struggling Mikhi I don’t see him making any impact this season.

“I don’t think that we lost today because we were very bad.”

Well, think again, because we were. Very.

Please all read Adams9802 comments on the players ratings after Everton game and read my comments. Lets hit the nail in the head to any type of abuse

SOORY Bud but it ain’t in our hand no more, thanks to your idiotic team selection on Sunday you ruined our chances of a top 4 finish… good going dumb ass