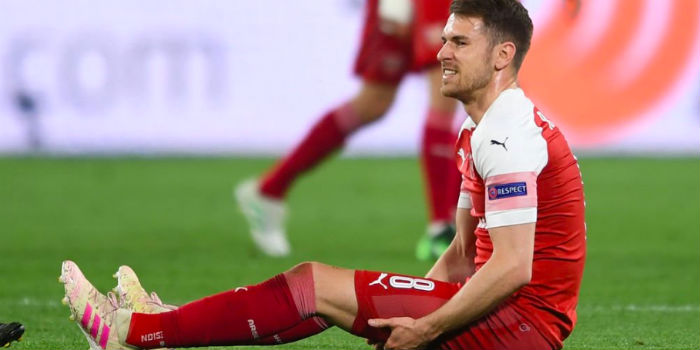 Unai Emery fears Arsenal will be without Aaron Ramsey for at least a few matches after the midfielder appeared to pull his hamstring in the 1-0 Europa League win over Napoli.

The Wales international was in obvious discomfort after he stretched into a challenge in the first half and was immediately substituted.

While the extent of the injury remains unclear, it’s fair to assume that any tweak to that part of the body could entail at least three weeks on the sidelines.

Worryingly, if it’s a proper tear to the muscle, it could mean the 28-year-old has played his final game for us before his summer switch to Juventus.

Asked about Ramsey following his side’s success in Italy, Emery said: “He was in a very big moment, with big behaviour and commitment to do something important, helping us on the pitch. But the injury today will give us some matches without him.

“It’s a muscular injury. Normally it’s going to be some weeks out of the team.

“But he was in a very good moment and working very well. We have other players… we need every player.”

Pressed on whether the Welshman could be out for the rest of the season, the Spaniard replied, “I don’t know.”

Fingers crossed it’s not too bad. Given his form in recent weeks, Ramsey’s absence will be a real blow. What’s more, given his 11 years of service to the club, we’d hate not to be able to give him a fitting send-off.

No doubt, we’ll get an update in the build-up to the Crystal Palace game on Sunday.

I’m thinking that is his season over but hope I’m wrong.

Let’s hope our top four chances aren’t over with him. With Rambo out, what looked like a difficult run of games over the next few weeks, now looks rather daunting.

6 weeks til the Europa League final. You need to be back before that Rambo to help the team send you off in style

Another header to sink Chelsea would be nice

I think I’d rather play the Germans. But whoever it is it would certainly be a good way for him to go out, with another cup final winner.
… Let’s hope we don’t arse it up against Valencia like we did last year in Spain.

This is the thing with Rambo, he plays a few games, gets his mojo back and then boom he’s out for weeks. I love the guy but we will not miss his weeks on end in the treatment room.

Yup, spot on. As much as we might like/love him -and all things being equal I’d want him to say- he will always be a sicknote.

Just to play devil’s advocate look at these appearance numbers (all competitions).

That’s not devils advocate, that’s agreeing with him. According to those stats you put up he has the least game per season percentage of all of those listed.

I don’t really feel like the bare statistics really show the true story. Ramsey should be 331 in 8 years. Because it wasn’t till after he came back from the leg break he established himself as a first teamer. His first year at the club he was fit and not being picked. Cesc should be 303 in 7 years because he wasn’t first team the first season. Which puts ramsey, cesc and Kos at similar numbers. It’s also worth considering the summer tournaments played. Ramsay has had all summer bar one off. The problem with Ramsey is that we let… Read more »

I really like Ramsey and just hope he can still play this season. And, if we’re being fair, he’s done well to be playing football at all (and at a high level) after what that Stoke orc did to him.

As I mentioned before would love to have kept him as he enters his peak years but the club may know better his injury risk to us per the salary he was asking.

Hope he recovers. Would love it if we have to face Cheshit and Rambo scores the winner …again (courtesy of a Giroud assist…again)

Emery should guarantee Ramsey e place on the bench for the Europa league final. Give him a target and fingers crossed

For a player with dodgy hamstrings that runs 11k per game, 3 starts in 7 days is a big risk. Emery’s used Ramsey well this season but think he might have made a mistake playing him from the start tonight.

Tough call. I was a little surprised Özil wasn’t involved at all after limited minutes at Watford.

Devastating. I was hoping he’d sign off with a winner in the EL final v. Russian Political Influence Investment Oppertunities Ltd. On a side note. Taking my undying love for Ramsey out of the equation. This may be a timely reminder of why it would have been a gamble to give him a massive contract. Like it or not he is more susceptible to injuries than the average PL player. That said. If this was his last game. I hope he gets some form of exposure to the fans at the Emirates before he leaves, to give him a proper… Read more »

He’s going to score the winning goal in the Europa Legal final against that lot.

Cue all the praise and nostalgia should that be his last performance
in an Arsenal shirt; however, the abiding memory will sadly be the image above — our longest serving player on his back side, wincing with a [insert groin/calf/thigh/hamstring here] injury. Juve should get a treatment table ready.

No the abiding memory will be his fa cup final winning goal. I’m just not sure which one.

Has to be the Hull winner … all Arsenal fans felt the world lift from their shoulders when that went in for 3-2 … happy daze. The Chelsea one was pretty close tho …

The final would also be Cech’s last game so we have to win it.

Very sad, but proves in is probably the right decision to let him go. Emery just started to get Aaron into the team on a more regular basis and his body cannot cope.

Doesn’t look very good for Ramsey, but we’ll see. If he’s played his last game for us he’ll certainly be missed in the remaining EPL games and in the Europa League semi, but we’ll just have to cope as best we can. The squad isn’t that strong so let’s hope we don’t pick up any more serious injuries.