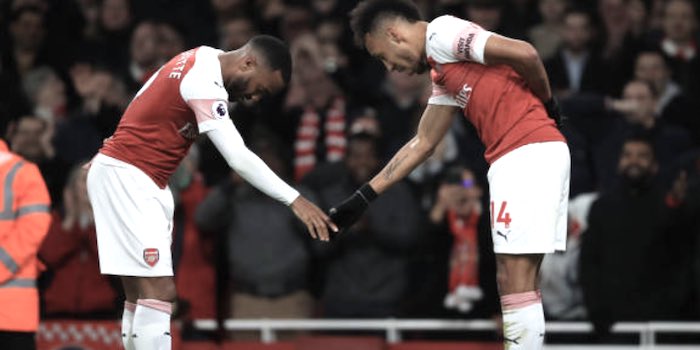 After scoring the goal to seal the 2-0 win over Newcastle at the Emirates this evening, Alexandre Lacazette says the team feel more confident this season than they did last.

The Gunners have been strong at home in both campaigns, but less effective on the road, so hopefully that sense of confidence will be a boost as we play five times away from home between now and the end of this campaign.

Speaking after the three points against the Magpies took us into third place, the Frenchman said, “I can feel the difference from last season. Now we may go to the Champions League.

“We are more confident, everybody knows what we have to do. When you win a lot of games in a row, of course there is a lot of confidence.

“The fans did their job, they helped us as much as possible to go to third place.”

It was a link up with his strike partner, substitute Pierre-Emerick Aubameyang, that brought about the second goal, but Lacazette insists it’s a team effort as we continue the push for a top four finish.

“I think we are important for the team, like the other players but Auba scores many goals,” he said.

“I try to do the same and help him score as many goals as he can. We have to score a lot of goals to win and why not go to the Champions League?

“I would like to score a lot of goals away. But if at the end we win, it is more important for the team and for the club.

“We work every day to be at third place, now we are. We have to work to stay in this position.”

Anonymarse
Reply to  Unai are meant to be together

Zakb
Reply to  Unai are meant to be together

I have a feeling it’s going to “happen again”…

Credit where it is due, for all the bad results this season we have already equalled the total points we got at the end of last season. If we were to win all our remaining games we would end up with 84 points and still likely be only third. That is testament to the standard of the top four this season.

Yes that is another matter altogether, however at least 3rd place is in our own hands 🙂

Good control on the game today. Mustafi-Sokratis-Monreal all had their moments. One bad pass to Leno from Mustafi (which Sokratis also almost made not long after, why we play these hospital balls is beyond me). One bad moment from Sokratis too easily shrugged off by Rondon for their best opportunity. Monreal earned himself a yellow for a silly two footed challenge and gave away a free kick. … but in general they coped well with Guendouzi and Ramsey unexpected but doing hardwork to attack the ball high up. As did the attacking line. This inevitably helps further back. If we… Read more »

Sorry, but I can’t agree about Mustafi. I don’t know if you were at the game, I was, and he was poor – it certainly wasn’t “one bad pass” as you suggest, he kept on losing possession. He’s obviously a major weak link in a defence that’s slowly improving (albeit from a low base). He needs to be shipped out at the end of the season, but I fear that on this form he’ll cost us goals and points at some stage before the season ends.

I thought, all in all, that Arsenal were quite good tonight. Players really seemed to be playing hard and with passion. Newcastle never really troubled the goal and if either or both of the stupid disallowed goals were counted the score line would have been even more flattering

It would have been more accurate…

Don’t forget, we’ve the best record against Newcastle of any team we’ve played in the EPL era so, and given our good home form as well, anything but a win against them would have been a disaster at this stage. That said, I agree that it was quite a good team performance.