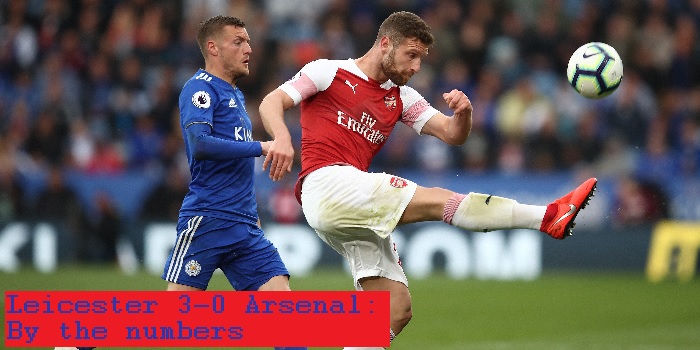 With a third loss in a row for Arsenal, things are really falling apart rather quickly. Arsenal have fallen from a realistic chance at finishing third and controlling their own destiny in the top four race to outsiders in 5th place 2 points back with two matches to play.

It is only by the flaws and floundering of the teams around them that they are still within touching distance of 4th place and a Champions League spot.

Even with the team mathematically not eliminated through League qualification, this run of matches culminating in an embarrassing result at Leicester, has brightly illustrated that Arsenal do not have the team depth to compete in two high stakes matches a week at this point in the season.

The run of matches against Crystal Palace, Wolves and Leicester is tough, all three are good teams but that is not a run of matches that should end in an aggregate scoreline of 9 to 3.

Hopefully the Europa League brings out a better performance.

Leicester 3-0 Arsenal: By the graphs 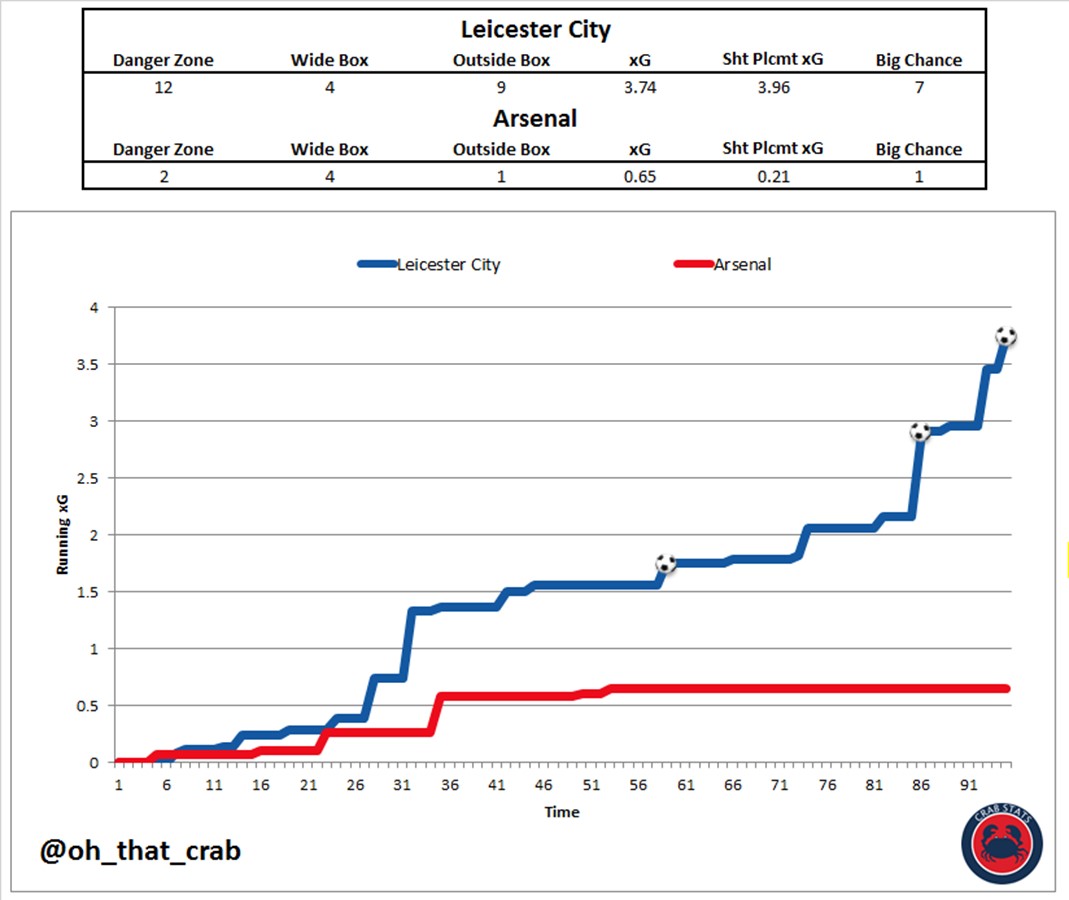 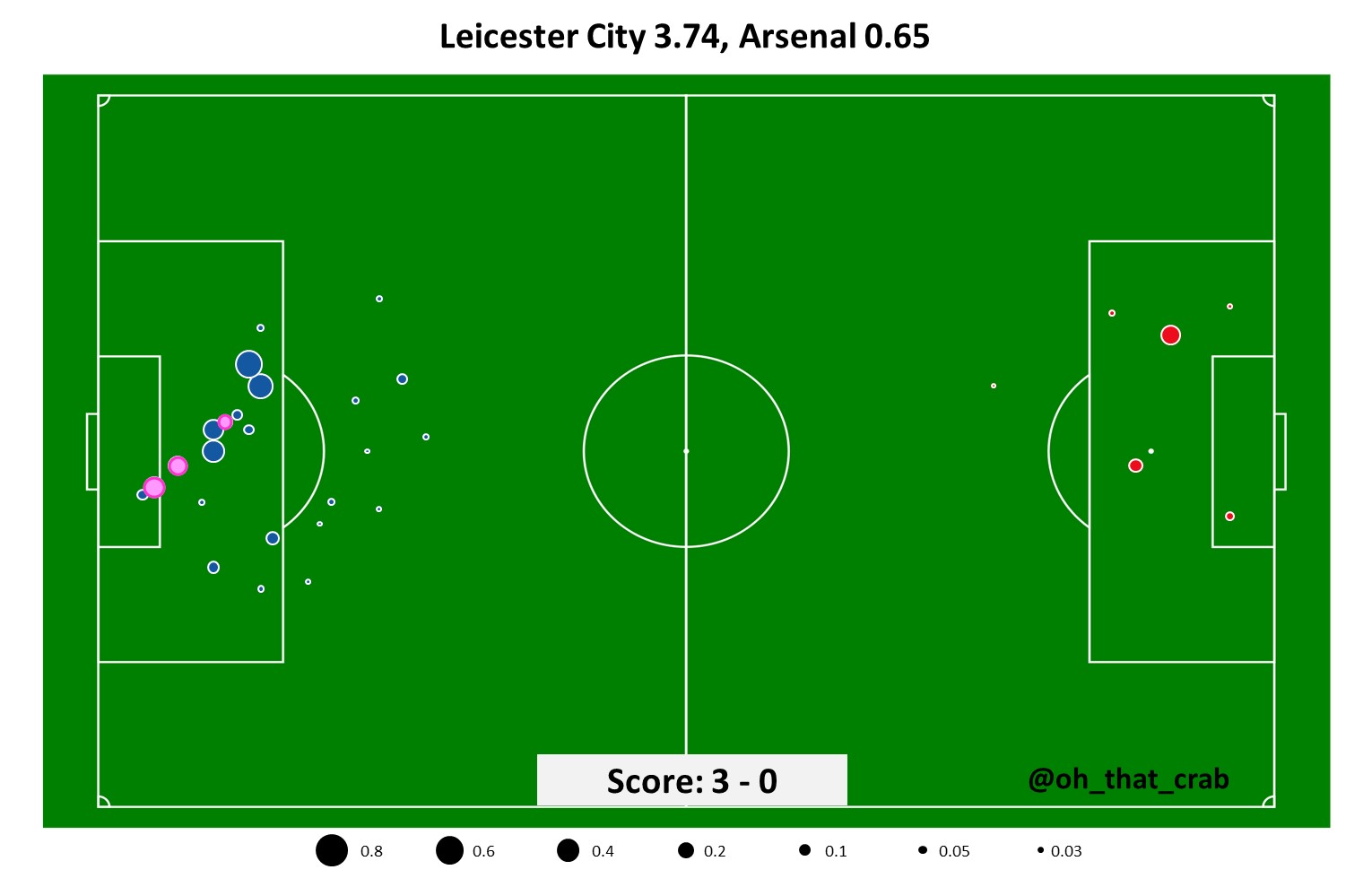 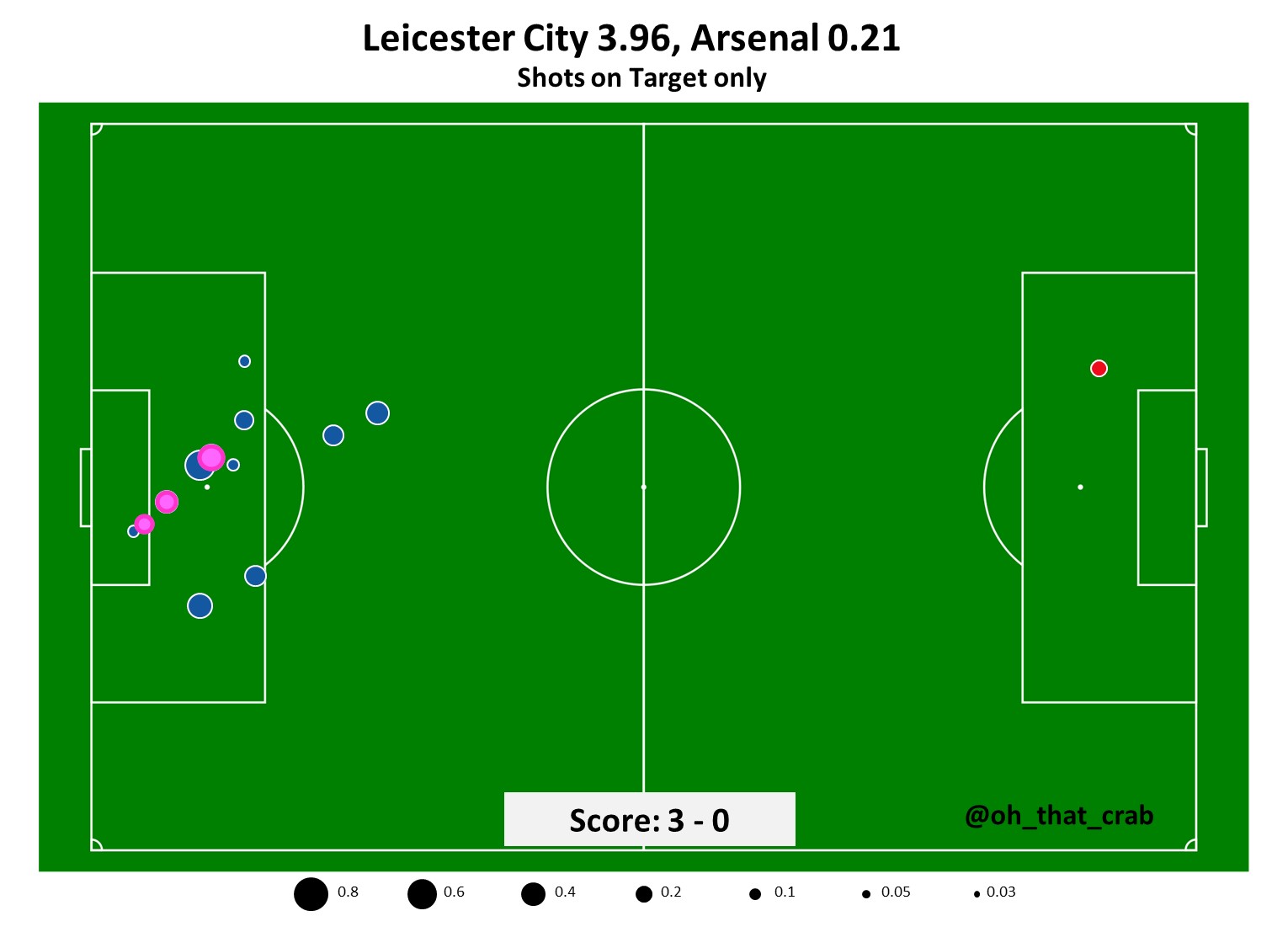 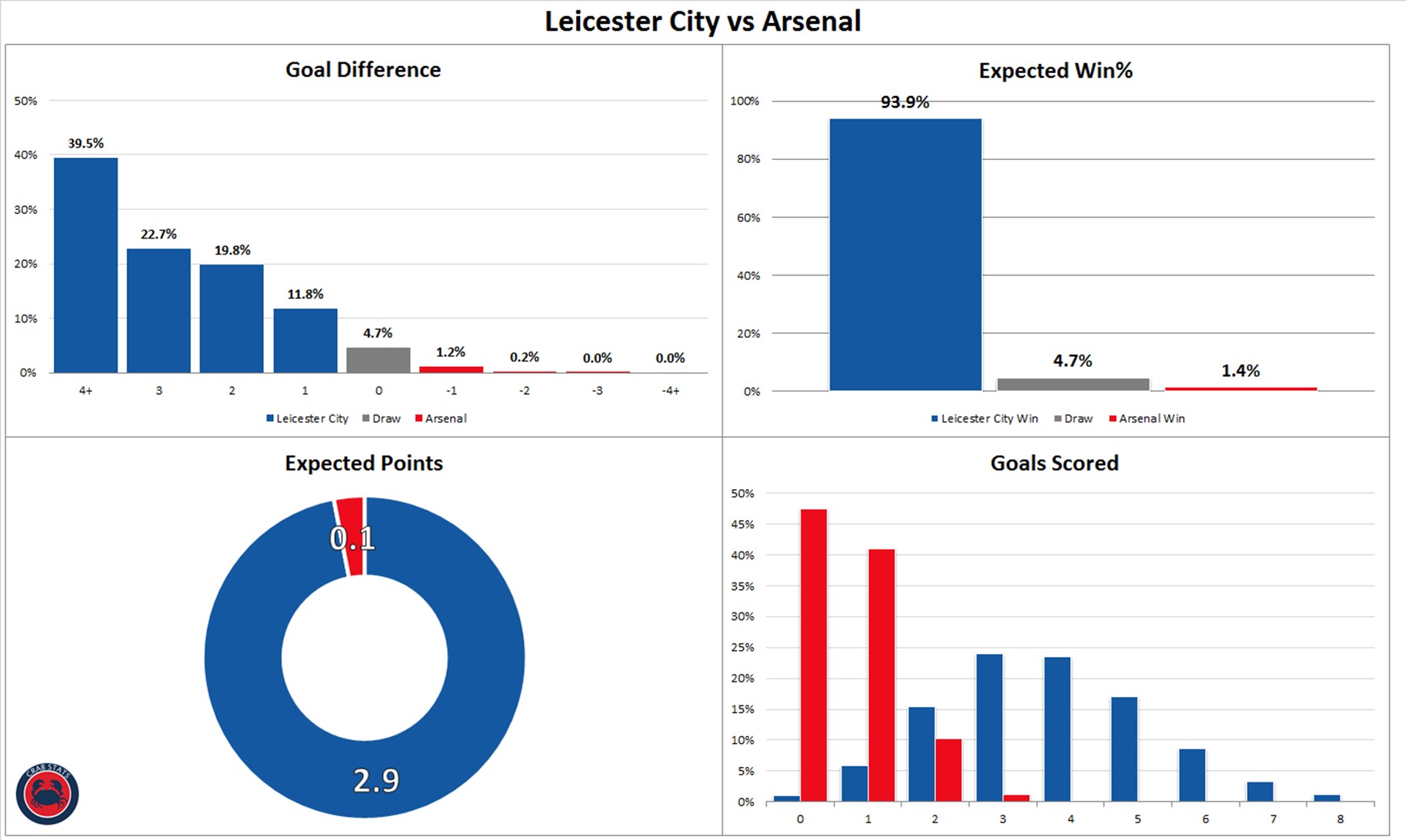 Leicester 3-0 Arsenal: By the numbers

1 – The number of Arsenal players to have a pass completion percentage greater than 90% (min 10 pass attempts). That player was Matteo Guendouzi with 11 of 12 passes completed. Alexandre Lacazette gets close with an 89% on 16 of 18 passing.

7 – Big Chances conceded by Arsenal, the most they have given up in a single match this season.

7 – Shots for Jamie Vardy, equaling Arsenal as a team.

1.7 – Expected Goals value of the shots Leno saved. A return to form after a stinker against Wolves. If somehow Chelsea screw up their last two matches giving Arsenal a chance to sneak into the top 4, goal difference could well be the deciding factor.

Arsenal set up to counter attack, it doesn’t really work

4 – Shots for Arsenal before the Red Card

9 – Shots for Leicester before the Red Card

1.6 – xG for Leicester before the Red Card

26% – Possession for Arsenal before the Red Card

The Red Card certainly changed the game but even before going down to 10 men Arsenal were by no means controlling the match. Unai Emery looked to sit deep and play on the counter attack in this match from the start. That in itself is a fine tactic and has seen Arsenal use it well this season at times.

The biggest deviation from this match and others where it has worked well is that here Arsenal seemed entirely too passive. There was no high press to speak of, with little to no pressure in the middle third of the field to back that up. Their 3 man midfield always seemed to be able to find openings against Arsenal’s double pivot and unsurprisingly were able to open up the Arsenal back line.

Arsenal had moments where they were able to counter attack effectively but the trade off of inviting Leicester to attack the back four over and over without pressure seemed like a doomed strategy.

3 – The number of times Arsenal have conceded more than 3 xG in a match this season. Last season Arsenal did it just 2 times.

9 – The number of times Arsenal have conceded more than 2 xG in a match this season. Last season Arsenal also did it 9 times.

7.6 – Shots in the penalty area allowed this season by Arsenal. Last year Arsenal allowed 7.2 per match.

For all of the focus on Arsenal’s defensive failings last year and the narrative that just about any manager would do a better job than Arsene Wenger, the numbers do not back that argument.

Fixing the underlying issues with the Arsenal defense was never going to be an easy task, especially with the injuries that Arsenal suffered. Arsenal brought in a starting center back and a true defensive midfielder in the summer and that was not a miraculous fix, like the rest of the squad it looks like it will be a multi year process to rebuild to an acceptable level.

Sources: Opta via WhoScored, StatsZone, Understat and my own database.

Fuck! Things are worse than I thought. We need to get our act together pretty quick if we are to salvage our season.

Last time we conceded 3 goals, 3 games running was Sheff U, Leeds, Villa at the end of season in 1966 where the Summer result was Billy Wright was sacked (ok we ended up 14th). Those 3 teams all relegated and are now looking to return to top flight by coincidence. 70% possession versus Wolves and 600+ passes – 3 goals conceded. Leicester 33% possession and just 188 passes – 3 goals conceded. We can’t control a game and we can’t play on the break either AMN is not a full back, nor is Kola – why go 4 at… Read more »

We need a manager who has a system and a style and doesn’t just play a random one every week.

Like James said in the Arsecast, he has one. Problem is that it’s just a bad system.

The only system that can lose to opposite types of football in the space of two weeks. One with us having 30% possession and the other with us having 70%.

How can that possibly be the same system?

We change formation and personnel and tactics every game. And then usually again at half time when it doesn’t work first half. It’s a joke.

How many systems have Liverpool employed this season?

That’s not what James said, he said there isn’t a system that plans to accommodate players not being able to string more than 3 passes together in a row or lose almost every 50-50.

The players aren’t executing whatever the plan is. That doesn’t mean there’s nothing wrong with the plan, but you have to acknowledge the players role in this.

The players must take responsibility too, however we can’t just be rid of all of them.

The manager on the other hand…

The glaring one how Koscielny and him let the second goal happen.

But shhh…not going to see any stats on that. Its called an agenda.

I had hoped that this season, Emery’s focus would be on making us defensively solid. By that I mean, giving us a structure, shape and coordinating a press, or at least finding a way to guide the opposition to non-threatening areas of the pitch. If we spent the season working on defence alone, I wouldn’t have minded. It would have been a way for us to target the long term by drilling a defensive system into the players, and then next season, looking to attack more, knowing that we are solid at the back. Now it seems like next season,… Read more »

The boys are drinking all night again, happens every year

We are the ArseNulled for now.

If we don’t make the champions League we will have under achieved. We had a worse squad last year.

trust emery for 2 years
Don’t be like dems wanting to impeach trump at every opportunity.

It is easy to find flaws but it is extremely challenging to manage a team. Ask neville-accomplished player, criticized every manager when he was a pundit but when he became coach of Valencia, was sacked in 3 months.

oK but Trump should be impeached for the sole reason he is an idiot.

Applying that across the board would be one way to solve world hunger….

Mourhinio lite. Small team mentality. he is even a poor mans Rafa Benitez to be honest. I have not forgiven him for the way we setup for Crystal Palace at home. How are you going to play 2 defensive mids 5 defenders (8 defensive players with the keeper) and play on the counter at home to fooking Palace!! Cowardly tactics. Every new manager has to overcome skeptics to their style of football, philosophies, types of players brought in etc. Wenger had to prove himself and so does Emery and so far he is failing that for me. Can only judge… Read more »

Most worryingly, and surprisingly this isn’t being spoken that much. we are losing our best defender and our best midfielder this summer, and there’s no reason to think we will replace either of them adequately. There’s every chance we are going to start next season with a worse squad than the one that started this.

A new defensive coach would be a good call.