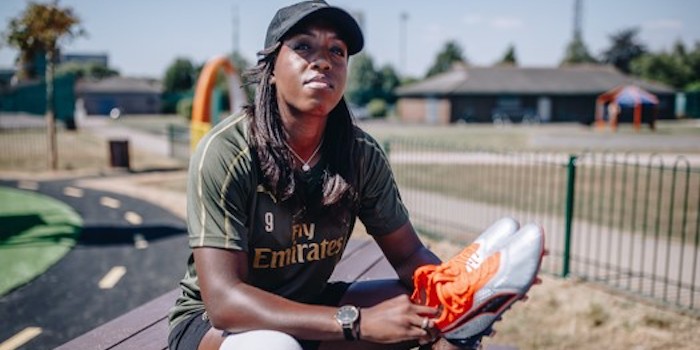 Arsenal Women confirmed their first WSL title in 7 years after beating Brighton 4-0 on Sunday. Gunners forward Dan Carter, part of that 2012 alumni, spoke to Tim Stillman after the game for Arseblog News.

On winning a first league title in 7 years…

It’s been a while, 2012 feels like a long time ago and we’re so happy to have won this trophy again. The girls have been amazing all season and they’ve really deserved it, the staff too. This achievement is a credit to the whole club.

On the influence of Joe Montemurro…

We’ve learned a new way to play under Joe and it hasn’t taken us long to adapt to his style, it’s a style we all really like. We won the Conti Cup last year, but this year we’ve gone to a new level. We’ve been favourites for the league for a long time and we’re just so happy to have seen it over the line.

When I got injured I wasn’t so sure that I would be back this soon and I wasn’t sure if I would play at all this season. But I’m happy I have been able to make a small contribution with some sub appearances in recent weeks. But the girls have been great all season and we’re just over the moon to have won it.

On the team spirit in the group…

I think the spirit is as good as it’s been since I’ve been here. Even the ‘rehab girls’ that have been injured have become really tight and we’ve formed a little clique of our own. We got each other through the gym days, even though we were all unhappy with our injury situations, we helped each other out. When we’ve come back, into training and matches, the girls have been great and really helped us back in. We have a great team spirit throughout here.

On the foundations built by the 2018 Conti Cup victory…

It was massive. Every year that I’ve been at Arsenal we’ve won a trophy of some sort, so every time we win, we have the belief that we can win everything. But we’re already looking forward, we’re champions and we want to retain it next year. That’s our next goal.

On the changes Joe has made…

He’s brought in a few players who have made a big difference, but mainly it’s the confidence he gives players. Everyone knows their role, everyone knows their job in every game. When we’re on the pitch it looks fluent, but that’s not a coincidence because we work so hard on that in training.

THIS TEAM.
THIS CLUB.

THAT MOMENT.
THAT FEELING.

WE ARE @FAWSL CHAMPIONS ? pic.twitter.com/GNwzGkqjFB