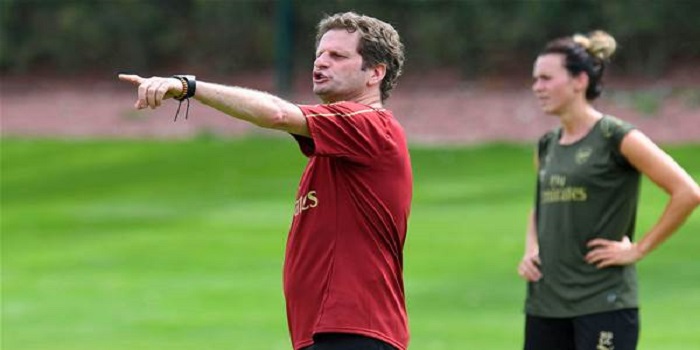 On ending the 7 year wait for a league title…

It’s an amazing achievement and I credit everyone involved. I didn’t realise it had been that long to be honest, to do it in the way we did was very pleasing and I am already thinking about what’s to come. I’m already thinking that we’ve created a base now and we need to take it on so we can continue to achieve this kind of success.

On keeping nervous energy at bay…

I think the way we play through possession, when you want to dominate and keep the ball, you’re always going to have pockets of the game where you are going to tire and we even saw that at the start of the second half today. It’s just something we have to try to manage even better, but we weren’t nervous coming into this, everyone knew their roles and everyone was very calm coming into all of these games in the final stretch.

A great day – a massive thank you to the players, staff and fans – very honoured! pic.twitter.com/NtzzpnQY4T

On winning the league title despite a large amount of injuries…

I’ve never made excuses with the injuries, that’s part and parcel of football and they’re things we have to put up with. The word I would use is adaptability, you can see from the day that I came in we’ve made wingers into full-backs, we’ve made centre halves into holding midfielders, once you have that fluidity and adaptability, everyone knows their role. We prepare thoroughly for every game and the players that needed to step up, did so.

The sad thing about the injuries is that we feel for the players that couldn’t participate. We got Viki Schnaderbeck back late, Tabea Kemme too. It was hard to manage but it’s all part of the building of a squad and we’ve got a solid foundation and an excellent squad.

On the competition from Manchester City and Chelsea…

They’ve set the bar in recent years and Arsenal needed to respond. We put some long term strategies in place when I arrived and I’m happy that it’s happened a little bit earlier than we thought. The competition is important in England for the growth of the game and the quality of football now is incredible.

Every game is hard in this league, you play against different systems and structures. Even today, we had to find a solution against a team that was quite deep defensively that dropped us and let us have the ball and we had to find a solution. There’s a new challenge every week and that’s testament to the teams and how they are investing, but also investing in a style and philosophy of football.

“We act with class, we party we class”… words of our one and only @MontemurroJoe ❤️?? https://t.co/QWrQplDZ8A

On why the success came quicker than they thought…

Building squads, foundations, attitudes usually takes 18 months to 2 years. But the belief was already there when I arrived. Everything we do, the language we use, the care and love that those players have got for each other is amazing. I am blessed to be part of a group that is really special.

Let’s put the football aside, they really care about each other. They go out together. It was so evident with the injuries that the players felt for the ones that couldn’t play and train. They love playing the game together too and once you’ve got those foundations, success is never far behind.

I understand that people watch the ball and watch the person that scores the goal, but every once in a while, take your eye off the ball and just look at her movement off the ball. She’s an intelligent player, she’ll make space for someone, she might drag someone out so someone can run into the space. Just look at the second goal today.

Sumptuous @ArsenalWFC football… they're turning on the style!@Katie_McCabe11 finishes nicely… what a pass from @VivianneMiedema ??

Viv has come out of the box, pulled someone away and Katie McCabe has made a run from deep and scored. She’s such an intelligent player and she’s so mature, it’s difficult to believe she’s 22. On the ball everything is beautiful and she’s a special player on the ball, but what she does off the ball is amazing.

On the adaptability of his players…

It’s part of my methodology to be flexible. I keep saying that 442, 353, 433 is all for newspaper graphics really. When a moment is happening in the game, tell me the system. There could be 2 back, 1 back, there could be 6 up top. It’s about movement, it’s about positioning and creating passing lines. Our way is based on how we move forward and that’s down to the player in the moment.

On avoiding a final day title decider against Manchester City…

It’s pleasing for us, if not the neutral. But I credit the girls, players and staff because we controlled our destiny all the way through, we controlled the games and when we were going to win it. That’s a beautiful place to be and as a player and a coach, that doesn’t happen to you very often in life. The way they went about it is fantastic.

Looking at it in previous years, Arsenal would often draw or even lose games they shouldn’t have, but we had a good record against top teams. Consistency is about playing your own football and continuously doing it in your style and being able to get the results and we made sure that against the teams we should be getting results against, we made sure we were prepared and ready for them.

Congratulations to the Arsenal Women! Hopefully the men can take inspiration from these champions and turn on the afterburners next season

The ladies are our pride! Absolutely worthy of the badge and much more. The complete opposite to the shite clowns we have in our men’s team

Now that the incredible ladies have sealed the title, can we play some of them in the men’ team?? Will be very helpful to get some respect and pride back I suppose.

I like the comment about formations being for the media for their “experts” to try and understand and discuss what “system” is being played.
The success this season has come about because there is no rigid system but the players are comfortable in any role. It has been a pleasure to watch but I guess a nightmare to defend against!
Looking forward to next season already and we still have to finish this one and watch the World Cup yet!

A few days of calm after the euphoria of last Sunday looking back on the various tweets, write-ups & replays. Personally, last Sunday was at the same level of joy as when I was at White Hart Lane in 1971 to see that title clinching win. In one of the joyous pictures at the end of the game I thought it apt that, after the catalogue of injuries, a pair of crutches was being waved around. I was smiling at Lia Walti then realised it was actually Tabea Kemme back on crutches. No mention has been made on any medium… Read more »