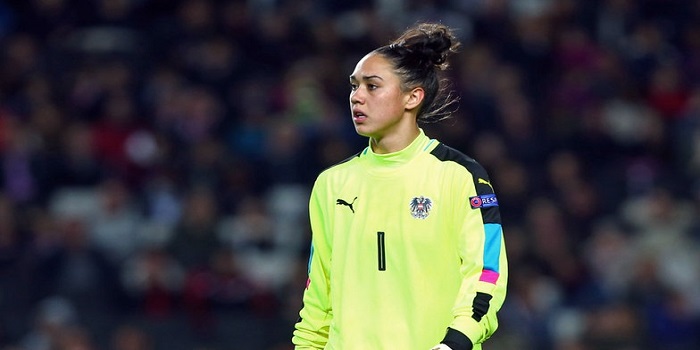 Zinsberger is good friends with compatriot Viki Schnaderbeck and spent some time in London and at London Colney when Schnaderbeck signed for the club last summer. Bayern announced the signing of Carina Schluter back in April, with Zinsberger’s decision to leave Bayern having already been communicated during last season.

Manuela is 24 and won 2 Frauenbundesliga titles with Bayern and has 40 caps for her country. She is also very comfortable with the ball at her feet, which fits perfectly into Joe Montemurro’s possession style. She joins Jill Roord, Lisa Evans, Vivianne Miedema and Viki Schnaderbeck in decanting from Bayern to Arsenal and she probably won’t be the last.

“It’s such an amazing feeling,” Zinsbeger told Arsenal.com. “I know a lot of the players here. We have a really good team here with really good quality and impressive performances, so I’m looking forward to being part of it!”

Joe Montemurro added “We are delighted to welcome Manuela to Arsenal. She is a world-class goalkeeper, and her achievements mirror that. Her experience and ability will be a great addition to our squad.”

Henry is having quite the game and Manuela Zinsberger has pulled a second brilliant save. #FRAAUT #WEURO2017 pic.twitter.com/E8H8cAyBOz

Welcome to the Arsenal, Manuela Zinsberger.

Welcome, may your stay be long and successful!

Are we just going to buy the entire Bayern Munich women’s squad, what is going on?

It’s a nice role reversal from the men’s team, I must say.

We’re playing them in the Emirates Cup too 🙂

As far as I am aware, the official Arsenal site hasn’t yet announced who Arsenal Women are playing in the Emirates Cup, yet alone the men’s team, so this must be some exclusive ‘insider’ news.

Do you also happen to know who Arsenal Men will be playing in the tournament too?

Can I have the six numbers for the next Australian Go Lotto please?

What about Mustafi? Can they take him?

He’s already ruined one Arsenal season, you’d want him to kill off another Arsenal squad too?

well said Cygan, the male Mustafi should play for Bayerns Mens team, and the female Mustafi for their womens team….

Ooh, another one! Any more on the way that you know of, Tim?

Welcome to Arsenal, Manuela – really looking forward to seeing you battling with PPM for that GK spot. Very sad to see Sari van Veenendal go, but I suppose she isn’t the right fit for our style.

Leonie Maier is done. I don’t know anything else concrete, but some rumours about centre halves in the WSL which I’ve not corroborated yet 🙂

I am taking your statement about the WSL centre halves as permission to hope that we are getting Gabby George. I know it’s very unlikely! Although I also see that Abbie McManus has left Man City – could it be her?

That’s keeper competition sorted…now for the forward line. Bayern rueing the loss of their coach? Seems to be instrumental in the exodus…

Definitely, they’re getting some good players in though.

just out of curiosity, what do signing these top ladies cost?

Transfer fees in women’s football are very rare, almost all of them are without fee.

And am I right in thinking that contracts are usually shorter? Two years v common? That probably makes transfer fees mostly redundant

Bit worried about a goalie that wears glasses
Presumably she has contact lenses to play?
Ellen White always seemed to be losing hers and she wasn’t deliberately throwing herself to the ground!

Sorry to see Sari depart but she probably did find Joe’s play from the back style difficult to get used to. Welcome Man. PPM needs the competition.