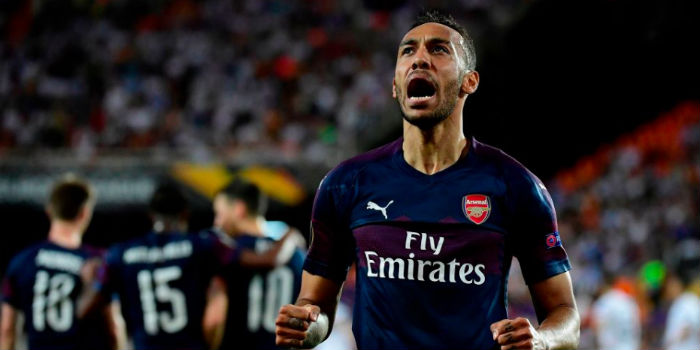 Pierre-Emerick Aubameyang says he wants to be remembered as an Arsenal great and is taking inspiration from the way former Chelsea striker Didier Drogba ‘destroyed’ the Premier League.

A late flurry of goals saw the Gabon international finish the domestic campaign as joint top scorer in the league and he’s hoping to continue that form into the Europa League final and beyond.

Since signing for the Gunners from Borussia Dortmund in January 2018, the 29-year-old has scored 41 goals and made 12 assists in just 64 games. It’s a stunning start to life at the Emirates that sets him up nicely to further climb the club’s list of all-time top scorers.

Ahead of next week’s trip to Baku, Auba outlined his ambitions for the future.

“It’s fun [at Arsenal] and I’m very happy,” he told French radio station RMC, “but it was challenging for me to come to Arsenal and impose myself as a great striker.

“Now I want my name to become a legend there.”

Highlighting the impact of Drogba, who moved to London as a 26-year-old and went on to score 164 goals in two highly-successful spells at Stamford Bridge, he went on, “When Drogba arrived, he was a little younger than me and he destroyed the Premier League, in a good way.”

Having struck up a formidable partnership with Alex Lacazette, both on and off the pitch, an interview rarely passes without Auba being questioned about his connection with the France international.

Once again, he reiterated why he and Laca are thriving together. “I already knew his style of play, our first meeting was great,” he said. “We share the same view of football. We joke and like to laugh. On the pitch, all it takes is a look. It’s natural.

He is well on his way

Laca and Auba are two very positive aspects about Arsenal this season.

How great would it be if these two came out?

I’d love to support a club with the first openly gay strike partnership.

Sounds great, though I’m sure there would be a lot of ‘Up the Arse…’ jokes.

Oh no, does his husband know ??

That was not necessary @ HelderHughes.

I’ve seen my fair share of stupid comment around the internet. But this undoubtedly takes the biscuit.
Pathetic.

That’s hilarious. You can say that certain players and referees should die on here.

But make a jokey comment about two fellas sharing a bit of romance and it’s the worst thing ever.

Have a word with yourself guys and maybe ask why, in 2019, it’s still impossible for a football player to come out as gay.

It that was a joke, it failed miserably. Worst or it is you’re trying to sugar coat it.

At least you got the apostrophe in the right place.

“How great would it be if these two came out?

I’d love to support a club with the first openly gay strike partnership.”

Once a week I dream that these two, in Baku, instead of doing that stupid dance celebration after a goal, they rip their clothes off and start kissing and snogging, like Bruno in that cage in Arkansas. Mkhitaryan then shows up from the tunnel, dressed in Jimmy Choos and Speedos, to join them for the happy ending. How lovely would that be?

Nothing wrong with a bloke sticking his flute up another man’s hairy arse. It’s 2019.

Let’s hope they both stay for at least another 2 seasons. Their partnership is something we need to build around. Hopefully their friendship will mean any potential suitors will be met with a firm castoff from both players.

Crazy to think Auba won the golden boot with quite an uninspiring attacking midfield behind him. If we can add some genuine quality to our approach play (personnel and tactically) he could get even more next year! Over to you Raul (I won’t hold my breath).

A hat trick on Wednesday in Baku will do your desire no harm.

Score a few next week to bring home the trophy and you’ll be on your way son.

That’s a phenomenal strike rate. I hadn’t realised it was quite so amazing. Anyone know what Henry’s rate was over the first 18 months? Or Wright’s?

Need to be channelling Alan Smith next Wednesday mate, not Drogba.

Hatrick in the final and a miss so back it hits Terry in the face and legend status will be confirmed.

Isn’t too bad to follow footsteps of Drogba. I’ll take 164 goals from Auba.