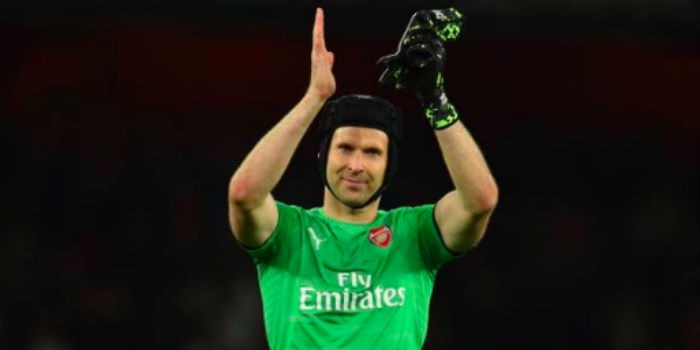 Petr Cech says his teammates are helping him chase his dream of winning one final trophy as Arsenal took a big step towards the Europa League final with a 3-1 semi-final first leg win over Valencia at the Emirates.

Barring an injury to Bernd Leno in the coming days, last night’s victory was probably the 36-year-old’s keeper’s last competitive match at the Emirates and he was glad to sign off with a ‘brilliant’ team performance.

“We didn’t start well, they started better than us with more confidence and aggression,” Cech told Arsenal.com.

“They created some chances and scored the goal, but after that, we came back into the game. The performance was brilliant from then on and we scored two goals [in the first half].

“In the second half, we tried to score the third one. The aim was not to concede another one – and we managed to do both tasks.”

Looking ahead to next Thursday, he added: “When you are chasing your dreams, you need to show courage at home or away. That’s how you win European trophies.

“We are aware that the game is going to be difficult, even more so than here, because they have nothing to lose and have to chase the result. Hopefully we will take it as an advantage.

“This was my last-ever home game in European competitions, so it’s a bit of a strange feeling for me. I wanted to win and get into a position to live my dream of lifting the trophy in my last game. That is still alive and thanks to my team-mates, we are in a good position.”

In total, Cech has played 138 games in European competitions during his career (111 in the Champions League, 21 in the Europa League, 2 in the Super Cup, 4 in the Intertoto Cup) picking up a couple of titles along the way. He’s had a stunning career.

It really would be fantastic to see him pick up one last trophy, particularly as it would make people who like Chelsea sad.

I just love it when we win. Everyone starts talking and it’s lovely. All the players, my boss, even my neighbor is talking with my wife and I am not bothered.
Keep the wins coming

Not to be pesimistic but i’d rather we kept all the yapping till after we win something. The tie isnt over. Focus should be 100%.

He didn’t say the tie was over but just expressing his happiness at finishing his career at the Emirates with a win. I really can’t see what your problem is

Ok will await your rant next week.

Can I too talk with your wife? (about the win) ? COYG. Keep winning.

Laca New Signing we don’t do john terry around here

Be careful, I’ve heard about your neighbor..

Made a couple of very decent saves.
Cech may well go out on a high. but could have been 0-2 down with AMN’s brain fart and won’t be easy over the sea. Here’s hoping we keep it up with fresh faces v Brighton.

Cech should have been more aggressive for their goal IMO.

With young players, you’re going to have lapses.

AMN’s asset is he is relatively relaxed and unfazed with things, doesn’t panic.

But that is also his weakness, he can be a little too casual.

I won’t have too much rotation.

As close to first squad as possible, power through final 3 games.

Fresh faces may kill us again. We’ve been doing a little too much changes.

back 4 was a tactical error last 3 league games.

To be fair. Maybe Cech should start this weekend. Not that it’s been Lenos fault but on paper hes conceded 9 goals in his last 3 games. Cech has conceded 1 in his last 3 games and you cannot tell me the likes of Napoli and valencia are inferior to crystal palace, Leicester and wolves. After the career hes had, a home send off would be a nice touch. A European trophy would obviously be better.

leno kept the scores down in the last few games. its not his fault we cant defend

Petr is one of the best goalkeepers of our time, and seems to be a highly intelligent footballer.
Even at this ripe age , he’s better than many others, glad he wears an Arsenal shirt.

Would be great for Cech to retire with something from us.

If its Chelsea, I’d absolutely love it if Rambo bowed out a legend with the winning goal (perhaps courtesy of an ‘unintentional’ Giroud assist)