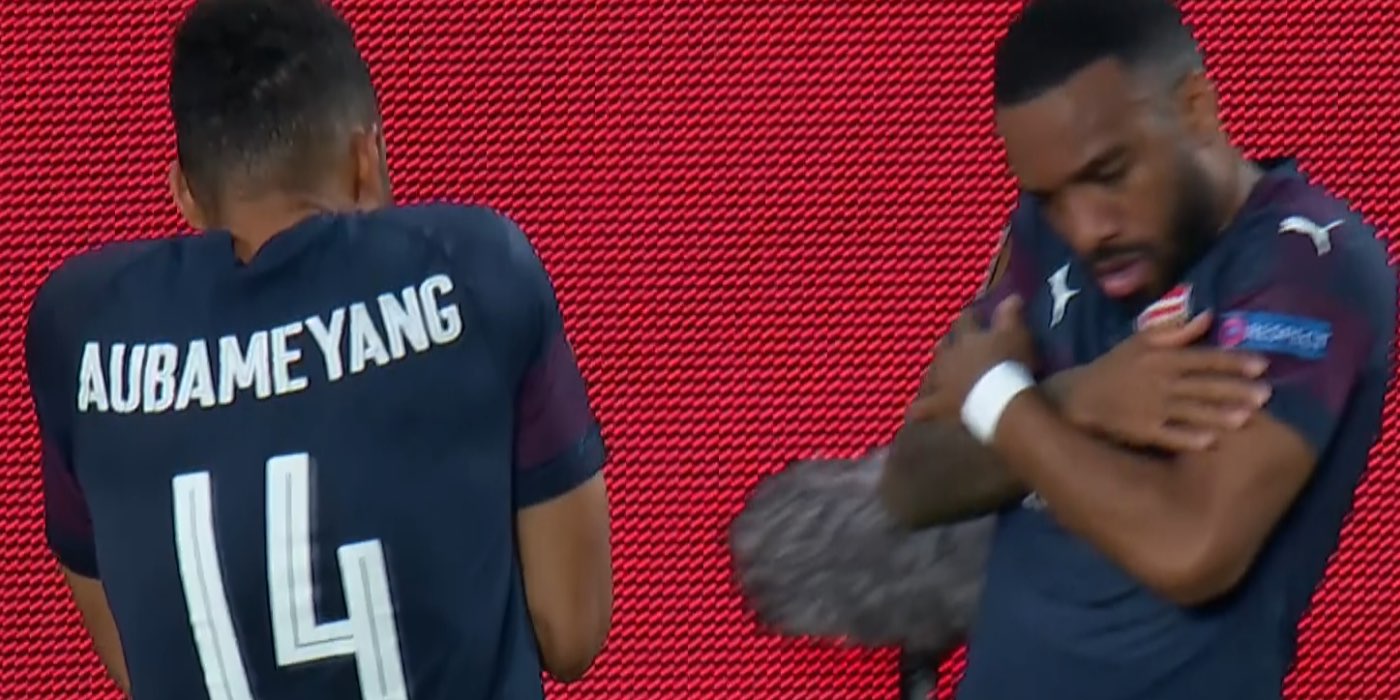 Between them, over the course of two legs, Pierre-Emerick Aubameyang and Alexandre Lacazette, scored seven goals against Valencia.

The Gabon international bagged a hat-trick at the Mestalla in the 4-2 win last night, while his great mate added to the brace he got in the first game at the Emirates last week.

The strikers stole the show in this semi-final, and as you’d expect they drew praise from  Unai Emery who will now contest his fourth Europa League final when Arsenal face Chelsea in Baku on May 29th.

The boss wasn’t just pleased with their attacking contributions though. He took time to highlight their hard work for the team, defending from the front, and helping drive the team towards a trophy this season.

“Yes, really they are very good strikers but I am proud of them in how they worked defensively,” said Emery.

“We needed that today, the big players can be good strikers but when their commitment is like today, working defensively to help us, it’s amazing.

“After their goal, our attacking moments were coming because our positioning and other players can create chances for them to score.

“But I think it’s the work of every player and they did it perfectly.”

The Spaniard was happy to add some praise for the fans too, after what has been a difficult period in terms of our domestic form.

“Individually, we can speak about some players,” he continued. “Aubameyang for the goals.

“Lacazette for another goal but I think we worked very well and this work is for being proud of them and also remembering our supporters at home.

“We played last week and they were full in the stadium with us. Today they are coming here to support us and I think we can be proud of each single player and each single supporters.”

How did the players rate? Check out the Valencia 2-4 Arsenal player ratings ?

A lot of people saying we are not ready for the champions league next season and based on what we have season they might be right. That said…dare I say that the team we came one kick away from beating twice this season, a team who we could still overtake (however unlikely), are competing in the final this season. Anything can happen in a cup. *runs away to puke

Even if Sp*rs lose and we win, I can’t see us scoring 8 goals at Turf Moor (with the chicken team failing to score at all).

We need a hat trick from Theo to help us out.

Well, I do recall a very Spursy moment to Newcastle United a couple of years ago. I think they used up their ten-year quota of non-Spursiness in Amsterdam the other night, so I am counting on Theo and Richarlison.

And the best bromance since…. forever

Yeah I know things have been a bit rough but I think we have the making of a strong team. We do need to add some quality to take it to the next level and thus improve squad depth – e.g. get a top quality winger, then having Iwobi or Miki on the bench makes the squad better in two ways!!!

Given how long Welbeck has been out for, Emery has done brilliantly to get both to this point of the season fit & firing.

Usmanov
Reply to  Kwame Ampadu Down

Keep wondering what could’ve been with Welbeck this season. He seems like a player that would have fit right in with this setup. Work ethic, high energy and all. Put Welbeck in there with Laca, Ramsey, and Auba and watch us press and defend from the front in a consistent manner. Or maybe put Welbeck on when any of the three is exhausted from all the pressing and running. Can only imagine.

Guess his injury records was too much of a risk for the club.

Not only him but Bellerin and Holding, two big losses, all of those three were playing well when they were injured, on top of that he was given no coin in Jan. Huge effort!

Yup. With bellerin and holding available it would mean no mustafi, and if AMN moves to CM then no xhaka. We’d havr e been 3rd or 4th

Do you not want us to win this last game…?!

There is no way this will happen. There are 17 days between the final game and the UEL final.

We still want to finish ahead of manure.

5th = full qualifying for the Europa.
6th = having to play Europa qualifiers in Outer Mongolia.

I wonder who is more tired today : Auba or Laca or santori?

Santori… and all he uses are his fingers!

Don’t get carried away people, other than our strikers, we were pretty shit. You can’t keep relying on one or two players to keep bailing you out, just look at Barcelona, for example.

Plenty of time to worry about that, just enjoy the moment mate.

Fortunately for us, Auba and Laca bought into Emery’s work ethic and vision of defending from the front faster than some of the other offensive players. Well, before the season started, we suspected this would happen. Some would adapt quicker than others, some not at all. Now’s for Emery to dispatch those that fall into the latter category, and replace them with players that fit this style. He needs to get us into the UCL though as an added incentive for prospective recruits. How much energetic and industrious this frontline would’ve been if Emery had a second year to work… Read more »

I see he didn’t mention Ozil, looked lacklustre maybe down to fasting for Ramadan. Then booked for walking slowly off the pitch. Hasn’t the ref seen him this year, if that was the case he would have the worst disciplinary record in the club

Ozil put in a great shift in midfield and worked his socks off. He had a 92% pass rate which was higher than any other player. Why do so many target Ozil so unfairly?

Kwame Ampadu Down
Reply to  Martin

To each their own I guess. You certainly target Leno unfairly yourself; people in glass houses etc.

A genuine touch of class from Emery praising the fans – which he’s done a few times this season.

As frustrating as it can be, it’s actually good that we have a manager that doesn’t belittle his players in public (Mourinho), give lame excuses when we don’t win (Klopp) or praise the idea of cheating your way to win (Poch). With a full campaign (and hopefully a trophy) under his belt, I’m hoping that we really kick on next season under Emery!

There was a particular moment when Lacazette was defending at the edge of our 18, won the ball and found an outlet pass….That was commitment of the highest order!!!! Proud Tonight…. COYG!!!

After the Brighton game this page was filled with how bad we are and how much Emery sucks. If you look at how bad Pool and United were after changes, if Emery wins the Europa League and gets us in the UCL after more than 2 decades under Wenger, they should put a statue of him in front of the Emirates

They are who we should build around. Two up front for most parts works for us the best at the moment. BUT also 3 at the back. This not only provides for the extra man to sweep against our careless defense (with or without Mustafi since he was clearly not responsible for our porous nature yesterday) but also allows a more compact press defensively further forward in conjunction with the strikers. Plus it adds the bodies closer to the midfield (which is still problematic, we don’t have the full solution, Torreira is not Santi) The work rate of NOT just… Read more »

The other thing of course is strikers were sharp for once…particularly Auba. He has been wasteful with chances and I think there was a bit of a kick up his arse after BHA and how he squandered our opportunities (It wasn’t the first time) He needs to keep this level now. Again people complain about lack of service but if you are world class, you make the service happen by running toward the ball or showing for it or going to get it. Laca’s goal and how he made time and space for the shot exactly illustrates this. Auba’s second… Read more »