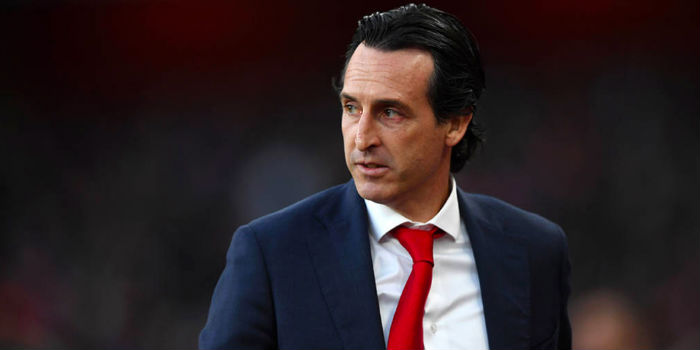 Unai Emery says Arsenal, led by goal scorers Alex Lacazette and Pierre-Emerick Aubameyang, delivered a ‘good performance’ as we secured a 3-1 win against Valencia in our Europa League semi-final first leg at the Emirates.

The visitors took advantage of a nervy start by the home side to open the scoring with just 11 minutes on the clock but the Gunners responded to the willing support of the crowd to reach the break in front courtesy of Lacazette’s brace.

Despite a dominant performance, it looked as though we’d be settling for a one-goal advantage heading into next week’s return fixture before Aubameyang converted in stoppage time to put us in an even stronger position.

In his post-game press conference, Emery was in buoyant mood, although he did warn the tie is still in the balance.

“We can be happy today,” he said. “Also, we can be proud of our supporters because here in Emirates we found this support for us in the 90 minutes.

“I’m also proud of the players because after 1-0 it’s not easy to be calm and come back with the result against this team.

“It’s not normal that Valencia concede three goals, especially after starting at 1-0 because they are a very, very good team on the transition.

“That’s the reason I am proud of our work today. But the second leg is going to be very difficult.”

On the contribution of his strikers, he said, “Yes, a very good performance from them both. But every player on the team, I am very proud of the players.

“I am very proud of the supporters and very proud of our work. Today, we can be happy. But I told them: it’s the first leg. The second leg will be very difficult.

“When you can enjoy this performance with the supporters, I think every supporter of Arsenal is happy as well. But with calmness we will prepare for the second leg.”

Let’s hope we don’t keep up our recent record of conceding three goals away from home.

We are better than Valencia, let’s step up and show it.

Such a relief! Hope this brings confidence back because we (team and supporters) sure need it.

Don’t want to count the chicks before they hatch, but, at this rate by next week weekend we could still be fighting for the top 4 going INTO THE LAST GAME OF THE SEASON, while also preparing for the EUROPA CUP FINAL.

By all accounts definitely not a disastrous first season for Emery, as some may lead you to think.

Definitely not a disastrous first season for Emery, but if you consider that on April 1 we had 63 points and on May 3 we have 66 points and have lost 4 of our last 5 PL matches while trying to make the top four (allowing Spurs to leave us in the dust and Chelsea to overtake us), he’s not guided the ship as well as some might lead you to think. Yesterday’s win is fantastic, but we can thank Auba and Laca for their efforts more than we can point to a system that is keeping the goals out… Read more »

Well, going into this season most experts predicted 6th and the optimists 5th in the PL. Taking into consideration that this is the first season with a new manager that is getting to know his players, finding the right team and tactics based on what he inherited. Everything must be set in the big context if sensible arguments are to be made.

I’m glad the gaffer went back to a back 3. We still leaked a goal (from set piece) but that was more a systemic issue although we did have Diakhaby covered. I just think our strict zonal marking sometimes does not leave us enough on field leeway to make adjustments to unexpected issues. In this case, Diakhaby represented an awkward challenge at back post with his height. Thought Cech could have come out to deal with the ball more aggressively but obviously we want the best header of the ball (Mustafi) closer to Diakhaby not Granit. There was similar issue… Read more »