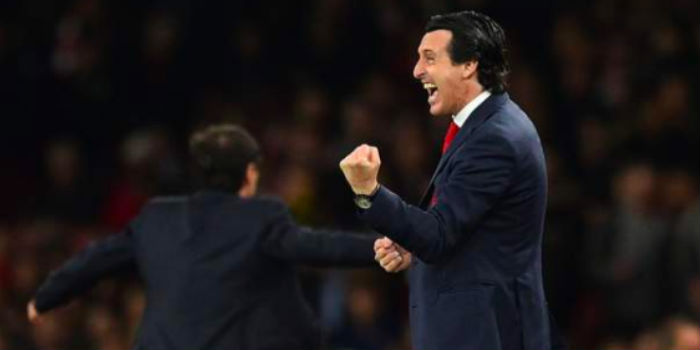 Unai Emery says Arsenal’s Europa League semi-final with Valencia remains in the balance despite his side coming from behind to record a 3-1 win in the first leg at the Emirates.

Mouctar Diakhaby’s early header stirred the Gunners into action as Pierre-Emerick Aubameyang and Granit Xhaka set up Alex Lacazette’s brace before the break.

The Frenchman had two chances to further extend the lead in the second half before Aubameyang added a gloss to the scoreline with a clinical back post volley in stoppage time.

Arsenal will now travel to the Mestalla in a strong position but while Emery was proud of his players he thinks it’ll be difficult at his former club.

He told BT Sport: “In the first leg we wanted to get a good result, knowing that it would be difficult. After the first goal our response was very good, with calmness and passion. We took our moments and the goals in the first half gave us confidence.

“We wanted to win and not to concede a second goal, but we also had to play. The third goal came at the end and for us it was important, but [the tie] continues to be 50-50.”

Asked for his assessment of Valencia who started brightly but then faded, Emery added: “Valencia are a good team. They played with strong players defensively and in midfield. They’re strong at set-pieces, they scored and we struggled with set-pieces.

“We’ll continue to work on what we can improve, on what we can do better, but generally in the first leg, over the 90 minutes, we can be happy and proud of the players and supporters. Now we will prepare the same for the second leg because we know it will be very difficult.”

Problem is if they score first, we probably would panic about the next goal being a winner. We can’t play for a clean sheet either, as a reliable strategy either given our defensive form.

So we probably have to start fast score a goal, then try defending, I still expect a clean sheet but we can expect to go through on aggregate.

Good mentality. Nothing is won until it’s done.

I also like his honest assessment that we’re terrible at set pieces. There’s no way we can catch Man city or Liverpool next season but if we can learn to defend better, maybe (just maybe) opposing teams might just start to fear us

Has it ever occurred to you that certain managers just aren’t good at defending? Track records are important to look at. Emery’s Sevilla teams conceded 50+ a season in La Liga and he’s led Arsenal to their worst ever season defensively in the Premier League.

Sure, he can’t account for idiots like Mustafi, but it is his system, and his coaching which is ultimately the reason, as it can be seen from his record.

VAR will solve the problem
Reply to  Jai

If you gonna win, you are gonna win with 1 -0 advantage. Oppositions will miss sitters, goalkeepers will have howlers or Mustafi will be playing like that Van Dick fella!…at this point u have to have that touch of fortune. All u can do is give your all on the pitch to leave no room for regret!

Okay, so could you suggest a hypothetical coach Arsenal should hire based on his great defensive record?

I don’t think we can get simeone, he is at a better and currently bigger club. But there are plenty of coaches in world football who are not really appreciated by the media. The manager at Ajax was a development coach a few years ago and is now the toast of Europe.

Personally, I would like to see Marcelo Bielsa, Eddie Howe or Ralf Rangnick at Arsenal. These are club builders, as in, squad building, establishing a playing style and developing youngsters.

Nope. If we can win at home, so can they. Their away goal could be very important, so we will have to be switched on and do the full job.

I think if they score two goals and shut us out, we are in trouble and you know how charitable we are.

Arsenal practically the only team with 3 goals to the good and you have to wonder if its in our favour at all. We have to go away in Spain, keep a clean sheet (cough cough) ala Napoli. And should we score an away goal its all over for them. BUT if we do charity and go 2 down, we are going to be in big trouble. SO focus. Team incredibly nervous first half (but so was Valencia) Hopefully we can build some belief again and we need critically to keep this 3 at the back plus as stable a… Read more »

“3 goals to the good”
Er, they scored one, we scored three which, by my maths, means we’re only two up.
Worse than that, theirs is away….

Typical manager speak. At 3-1 it’s very much advantage arsenal. If we can score early it’s probably game over.
Though he’s probably allowing for our awful away form so maybe 50-50 is accurate

I loved the pressing shape at the end of the second half. We were able to guide them all the way from our flanks, back to their goalkeeper. The whole worked hard and Ozil’s urgency to cover for Xhaka or Guendouzi after we lost the ball while they were in advanced positions was good to see. We actually played the best midfielder in Spain this season off the park, even though we couldn’t really get the better of Diakhaby, who isn’t normally a midfielder. All in all, a good performance and a great result. Still seems like there is more… Read more »

the best spanish midfielder this season being?

Dan I Parejo. He has been sensational for Valencia and so good that he is now in the Spanish national side. He has the most goals of any midfielder in the league and his passing has been very creative and influential. I really though we would struggle against him, he recently ran circles around the Real Madrid midfield and we completely negated him.

I love when our players support our injured players. I salute you Laca for your missed header tribute to Welbeck. Superb.