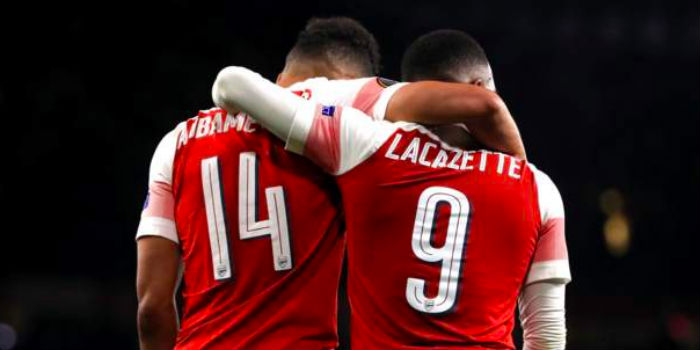 Alex Lacazette became the third player in Arsenal’s history to bag a brace in a European semi-final as he led the Gunners to a 3-1 first leg win against Valencia at the Emirates.

Only Charlie George and Steve Bould had achieved the feat prior to this evening although the Frenchman did rue the chances he missed to grab a hat-trick in the second half.

Strike partner Pierre-Emerick Aubameyang teed up Lacazette for an equaliser on 18 minutes and seven minutes later he headed home a Granit Xhaka cross. Aubameyang netted in the dying moments to give Unai Emery’s men a two goal cushion ahead of next week’s return leg.

“We know it’s going to be hard [in Valencia] so of course getting as many goals as we could is better for us,” Lacazette told BT Sport.

“I had two more chances where I could have done better but thankfully Auba [Pierre-Emerick Aubameyang] scored the third one.

“We conceded the first goal. We knew they were good on set-pieces and we have to be careful of that in the second leg. But the team showed good character and reacted well, and that’s a good thing from tonight.”

Heading into the final weeks of the season, Arsenal know they still stand a chance of qualifying for the Champions League via two routes. While their fate in the league is out of their hands, the prospect of getting back to Europe’s top table along with a trophy, definitely appeals.

“We want to win the Europa League to go straight to the Champions League but also to win a trophy,” said Laca.

“We want to finish in the top four in the Premier League and if we can go to Baku [for the Europa League final] it will be special.”

Not gonna lie, Mestalla is a scary place to go to even for Barca and Real. But I have confidence that we can pull off something there and go to the finals. COYG lets end the season on a high!!

We can beat them, just need to do something about our away form.

We’ll break the shackles and win that game 2-0, you heard of here first! #COYG

Sure, don’t we all, but you (all) should have thought about that before laying three steaming turd-piles in a row.

What a playa! <3 . For top 4 we're waiting on Watford to do us a favour. Troy show us some cojones.

Do you really think we’ll get anything from Burnley anyway?

yes we will mate

I think we’ve shot our bolt in the Prem this season. We had a very good chance to get top 4 and even finish above Sp*rs but the last three games had ruined that. I hope we can win our final games but it will be pure luck if the other teams drop enough points for us to capitalise. It will be fantastic to get to the final and winning the cup would be a better way of getting Champions league football next season imho. Just need a little focus in the away leg, get an away goal early and… Read more »

That top 4 ship seemed to have sailed with the 9 points dropped and 9 goals conceded.

Brilliant performance by Lacazette; his work rate is fantastic when we’re at home. He, and certainly Aubameyang, just need to apply the same effort when we’re away and things start to get shaky!

However, I’m finding it incredible that some players have the audacity to talk about fighting for a Top 4 spot now – after cocking it up so badly when it was actually in our hands…

I love that gesture in the match when he kept touching his head after Valencia’s goal.

Bit less banging on about finals and 4th Laca. Just concentrate on the next game.