Arseblog News – the Arsenal news site
Home Matches and team news Europa League Sokratis: We hear the defensive critics, and we have to improve 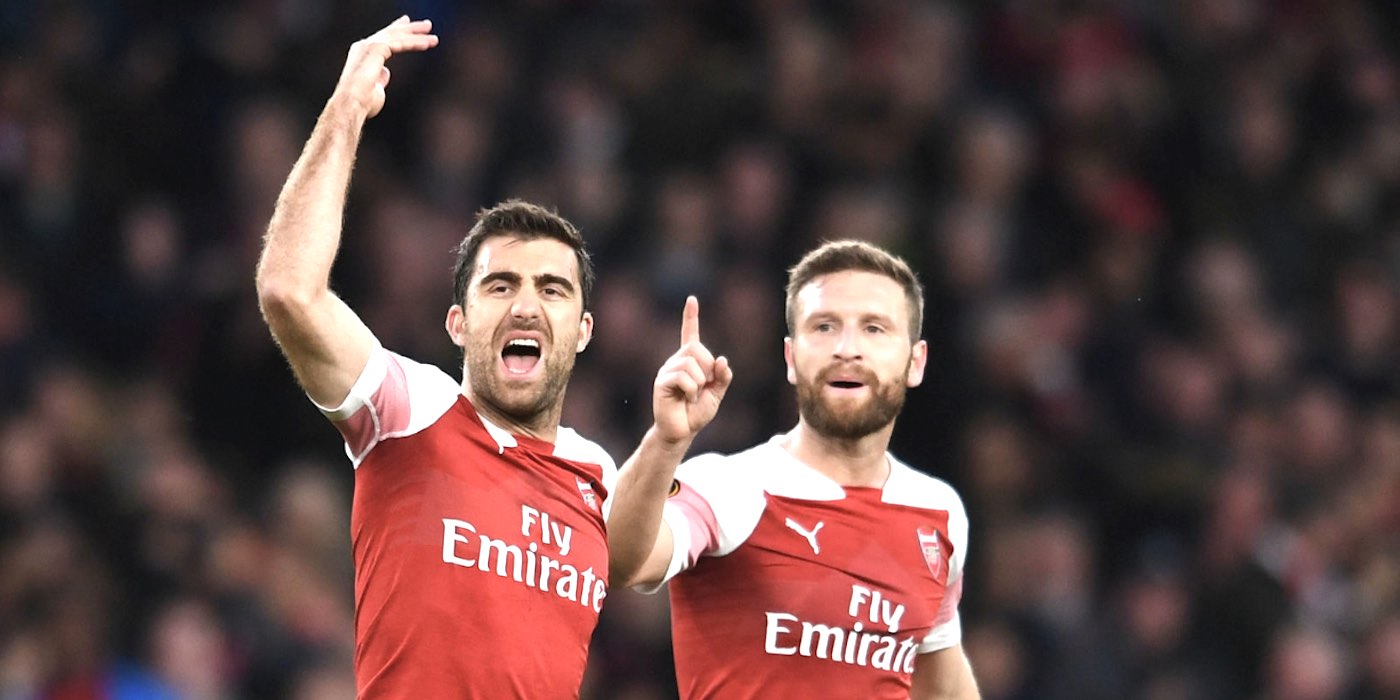 Sokratis says that the Arsenal defenders hear critics of their performances, and while he insists they have to do better, they don’t let the criticism affect them.

The Greek defender was speaking after the 3-1 win in the first leg of our Europa League semi-final against Valencia last night, which saw the Gunners go down a goal before taking control of the tie.

The win followed three successive Premier League defeats, something he was all too aware of.

“When you play at a team like Arsenal and you lose three games, of course you hear critics and you have to improve,” he said.

“We are here to improve, to give the best for the club, for the fans and for us also.

“I think that the biggest point is that we have to stay focused. We are a big family and we are all together, we stay all together.

“In one week, for example Koscielny makes a mistake or I make a mistake or Mustafi the same, Nacho too, we are people and not robots.”

The end game of this season though is to finish in the top four and/or win the Europa League because of what it means for next season’s campaign.

“At this moment I believe and I think only this – to play in the Champions League. We can go to the final and win the Europa League.”

This crop is great at saying the right things but not making any changes on the pitch!

Totally agree. And, realistically how far will we get in the C/L even if we do manage to get there? With this defence I can see another battering by a real quality side.WTF does Steve Bould do for his supposedly £35 grand a week?

i’m sure djourou said the same thing 25 times a season!

‘Words are cheap.’
Nobody knows that better than you to be fair!

At least this is short and to the point!

I love this guy’s mentality.

Some mistakes against Valencia. Had it been Mustafi, there would be all sorts of complains.

In fact the German made some critical clearances when Sokratis was over committed and beaten by the man on the ball.

Improve? Anyone can see that a limping creaking can’t sprint anymore Koscielny is still our best CB. It’s harsh but that means the rest of them are simply not good enough. Sokratis, Mustafi, Mavropanos, Monreal, not one of them is better than a man who is very (and I mean painfully) visibly on the last part of the very last of his legs as an elite athlete. That should be a damning enough indictment on its own of our CB talent pool. None of these guys can compete with the very best anymore (Kos, Monreal) and some haven’t shown they… Read more »

Sorry, but Sokratis saves us a lot and what has Mavropanos done to ypu? He hasn’t played all season up to now as he was injured.

He’s not a better defender than current Koscielny. Current Koscielny isn’t capable of playing against the best attackers in the world anymore (CL standard). By extension, Sokratis isn’t capable. I’ve not followed his career so I don’t know if he ever was, but his showings this season suggests that he currently isn’t at that level, and given his age, I don’t expect him to get any better. Mavropanos has played a little over 300 mins of football football for Arsenal over 2 seasons. He’s made 6 appearances, starting in 5 games and 1 sub. He’s completed 90 mins in 2… Read more »

Well said. Both comments are true enough to me.
You wonder how many goals should we concede before people realize it’we don’t have the quality in the back.

Not sure where the controversy is, Kos is our best defender by some distance, and he is very clearly playing at/beyond the limit of what his body can handle. He’s being a fucking soldier for the cause because you take one look at him and you see that’s a man playing through all kinds of pain but how many games has he finished and still looked our best defender on the pitch? Basically everyone bar the first two appearances from his comeback. These are just indisputable facts that don’t say good things (to put it very mildly) about the defenders… Read more »

Yeah, I’m surprised that so many feel Sokratis is streets ahead of being a middling, journeyman defender. He’s OK, good for depth and so on, but blimey there’s some really quite worrying overrating of his performances and ability this season.

Agree. Mavropanos (effectiveness) lies largely in the imagination of some.

He has not proven anything and has looked positionally green in the few extended outings he has had.

That’s not to say there are no raw ingredients to shape him to good potential that he has (I like his frame) but he isn’t even anywhere near Mustafi at the moment.

He needs to go out on a strong loan to accelerate his development.

I’m never sure about loans, but agree with the rest. He’s made several red-flag plays in his limited time with us and hasn’t, as you say, proven a thing.

You can say what you sant about Sokratis defending, but one thing I like in this bloke is his attitude and character. Unlike most of our defenders, this guy seems like his willing kill if thats what it takes to win games. There’s certain rudeness in him we’ve been missing for long.

Sure, but the problem is this attitude doesn’t translate into better defending. He does a fair enough job, but he’s a penalty waiting to happen on set-pieces, his positioning is more than questionable, he doesn’t contest aerially on a consistent basis, he’s not an organiser (that we can see), and he leaves his feet far too often.

He’s OK, but we need and deserve much, much better. That’s not say I don’t quite like him, because I do, but he shouldn’t be a starter in our team.

Sokratis is just as error prone as Mustafi. We need a defender who reads the game well like the BFG.

Not as error prone but he has made mistakes as well… Just most people who prefer to criticise Mustafi tend to conveniently turn a blind eye and ampify instead EVERY mistake of Mustafi. They neglect the good things the German brings. Point in case “By the Numbers”. You won’t see that stat merchant publish any numbers on Mustafi’s critical clearances last night. He’ll shift focus elsewhere. After all its Stats…its what you want people to see. BUT the media has also been culpable in over emphasising Mustafi’s ‘error prone’ characterisation. BBC for one. He’s certainly not error free but he… Read more »

You are so to the point. I don’t get it why people are disliking this comment. Mustafa does 5 things good, then one terrible thing. Sokratis is solid but the CB we need is someone who will replace Koscielny in near future. He should command the area, organise the defence and atleast be Koscielny level. Someone along the lines of VVD.

We need a very athletic youthful CB in my opinion, to compliment Sokratis and Kos

We need to replace them both with CL standard defenders.

Isnt kos and monreal out of contract after this season? If that’s true we need 2 more sokratises.anyone has mislintat’s number?

Koscielny has another season & Arsenal can extend Monreal’s another year if they chose to (not sure if they already have).

Really solid first season from Papa. Holding is to come back from injury, if Mavropanos steps up we will need only one central defender.
Now go and get us this Europa League! COYG

Sounds like these guys are getting a taste of reality just in time.

Europa League is a great opportunity to blood young players into European football. It is not an elite competition.

Like the FA Cup though, it’s a title. It’s a piece of silverware.

Get the fucker and get back to where we once belonged.

Keep it up arsenal
We love you