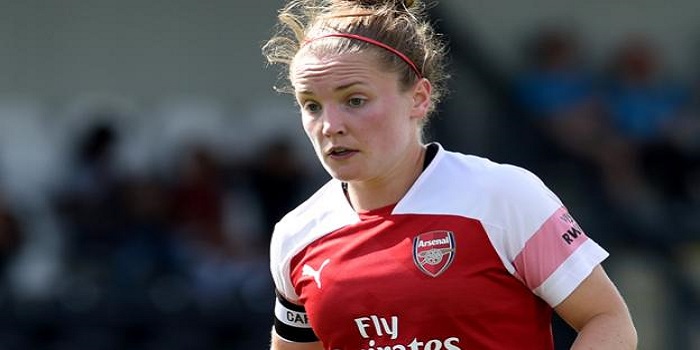 Arsenal Women put the seal on their championship winning season by beating Manchester City 1-0 at Meadow Park on Saturday, inflicting a first domestic defeat on the visitors since the last time they played away at Arsenal a year ago this weekend. Tim Stillman caught up with Gunners skipper Kim Little after the game, exclusively for Arseblog News.

On waiting 7 years between league titles at Arsenal…
I’m not too old yet, but when you get a bit older I think you take things in a bit more and you reflect more and that’s definitely been the case with me for this one. It’s been too long since this club last won the league and that’s something I have thought about since I came back here [in 2017] and I am just so appreciative and grateful to be lifting trophies again for this great club.

On playing a high press against City….
I think that’s a trend in our play in general, but we were able to press them high in the first half and we got the taste for it because it was proving to be successful, we won the ball back a lot. But we should have scored in the first half, particularly me, I had a good chance. We did the right things today and we are encouraged by that, but we also know there are things we can improve on for next year.

WHAT A WAY TO END OUR TITLE-WINNING SEASON ?#WeAreTheChampions ? pic.twitter.com/COZf9EYw8B

On City leaving Nikita Parris and Georgia Stanway out…
We didn’t talk about the personally, but you know when you play City they play a certain way. They play with inside forwards and they play quite narrow. We concentrated on staying solid at the back and closing up those spaces. They are a great team and they score a lot of goals, so even when you take two players like that out, they have two great players come in.

But we are always focused on playing our own game and we were able to do that today. It wasn’t our best performance, but a professional and solid one and we got the goal at the end to give the season the perfect ending.

On stopping City’s unbeaten domestic run…
As a professional athlete, you are always motivated to play and beat the best teams, we’re very proud to do that. We’re champions and rightly so and we wanted to show why today and we’re just delighted to be able to end the season this way with our fans and celebrate with them.

(Thanks for catching the trophy, Kim! ?) pic.twitter.com/hQKkMXEF8L

On the departures of Sari van Veenendaal and Dominique Bloodworth…
I can’t speak highly enough of them and their contribution to this club over the last four years. They’re really good people and players and they will really be missed on the pitch and in the dressing room.

On Emma Mitchell’s late winner….
She’s been in and out with injuries this season, but she’s played a big part and she’s such an important character in the group. So for her to come on today and have the limelight in that way makes me so pleased for her. There were so many players who weren’t on the pitch today who contributed to our season and have played a huge part in our success and we will celebrate with everyone together tonight.

? Even @emsmitch3 can't quite believe it!

A fine way to round off an amazing season! pic.twitter.com/fw0VIclj2c

Great stuff! Looked like it’d take something special to get past their keeper today, but we managed to find that special goal. I’ve said before that it’s felt like we were just trying to just keep of the competition since all the injuries hit, so it’s great to (deservedly) beat our closest rivals and really show we deserved the title. Also, apart from that Chelsea demolition we haven’t had that good a record against the other top teams this season, so good to rectify that before it could develop into the dreaded “monkey on the back”. And thanks again to… Read more »

Great job Aresenal women and we want trophy from men also let keep it up..

That is one hell of a goal! A fitting way to finish a great season, and show whose boss.

A bit of a Chinese Day down at Meadow Park yesterday……..mostly very sweet just to be there with the players, staff and supporters of a great Club to see the grand finale. How appropriate that stalwart Mitch should come off the bench with a belter to win the last game against our closest rivals…..Rose of the Rovers stuff???
The sour? Well sad really, when two of this wonderful group won’t be with us next season. Thanks for what you have given us this last four years. Health and happiness Dom & Sari?