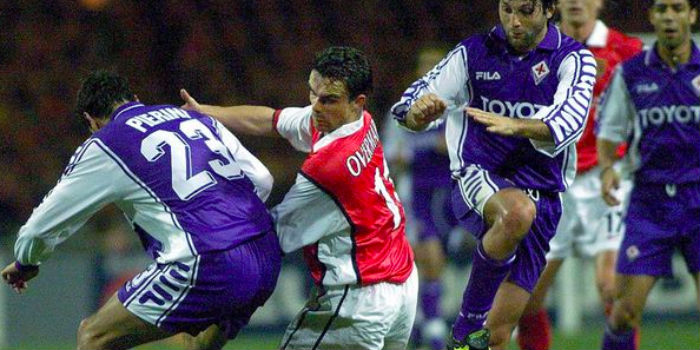 It has been confirmed that Arsenal will face Fiorentina instead of Roma as part of our pre-season preparations in the USA.

After finishing sixth in Serie A, Roma are now required to begin their Europa League qualification in mid-July so they seem to be dropping out of the International Champions Cup.

The showdown with La Viola will be played on Saturday, July 20 at the Bank of America Stadium, Charlotte, North Carolina. Apparently, if you already had tickets for the Roma game you’ll be contacted.

As far as we can remember, we’ve only ever played Fiorentina twice, a double-header in the Champions League group stages in 1999. We drew 0-0 at Stadio Artemio Franchi and then lost 1-0 at Wembley following a great strike by Gabriel Batistuta.

Would prefer we didn’t do much/any travelling and spent the time getting ready for the season.

I get the desire to spread the good word of Arsenal around the globe. But why always USA?

We’ve been trying harder than Robbie Williams to crack that market and we’re always going to be behind baseball, football, basketball and hockey.

I would imagine money plays a part. It tends to be the primary consumer in most decisions now we are a brand instead of a community.

VAR will solve the problem
Reply to  Scott P

Out of context, but if City is banned from UCL next season, can we sneak into the CL? Don’t u have to have 4 teams from England for some type of TV money…that would make my day, if it’s true ?

3 times in 6 years. Not infrequent.

or, three times since 1989, which, if i’m not mistaken, is the only other time they’ve played in the US.

How very accommodating of her…!

Eduardo
Reply to  Leno me, I’ll be your friend

Leno me, I’ll be your friend
Reply to  Eduardo

Haha pretty certain it’s going to be rather unpopular but I figured after decades of following the club’s honourable gentleman traditions I was allowed one front Arsenal joke!

Unless i’m going mad (it’s quite possible), the Colorado and Bayern games are actually at 1am and 4am UK time…

Which is the usual time for any of the European games for folks living in the sub continent. And you are complaining for a pre season friendly. Woah!!

? Who’s complaining? Try reading what it actually says rather than what you want it to say.

Wtf bought tickets for this and was looking forward to the Roma showdown. Why has the ICC not notified me yet? I foresee a far worse atmosphere with the late notice and I doubt Roma fans in the states will still travel to Charlotte.

I hope we’re Simply The Best against Fiorentina Turner.

What’s That Got To Do With It

Might actually be a better game than Roma…see you there Andrew !

That’s it…I demand a refund! To be honest I really don’t care if we play Sutton United. Just glad I could make an Arsenal match.

They offered me one due to the team change. I will still be going though, more for the kids as I am still mad about the end of the season. Hopefully I am over it by then 🙂

I’m still planning on going to the game but waiting to see if any discounted tickets become available before buying. There are a LOT of tickets still unsold for that game and sales may be even worse with Roma pulling out now.

Not worth it. Heirachy should do well to be reminded that our brand is sliding. There is a false sense of business as usual thanks in part to the goodwill generated by Wenger over the years but we are slowly slipping. 3 seasons out of CL have now start to cast doubts in the minds of better players which we were once able to convince with promise of uninterrupted CL (sadly too easily belittled by many fans as a 4th place trophy not worth celebrating, and all too easily taken for granted) Prices on some of these ‘friendlies” are exorbitant… Read more »

Got offered a refund, pretty good customer service. Will keep my Roma shirt in the closet.

I’m happy that Arsenal will finally face their fiors, and hopefully come out stronger on the other side!!
Not sure what Tina’s got to do with it, though

Maybe knick Chiesa while we’re at it