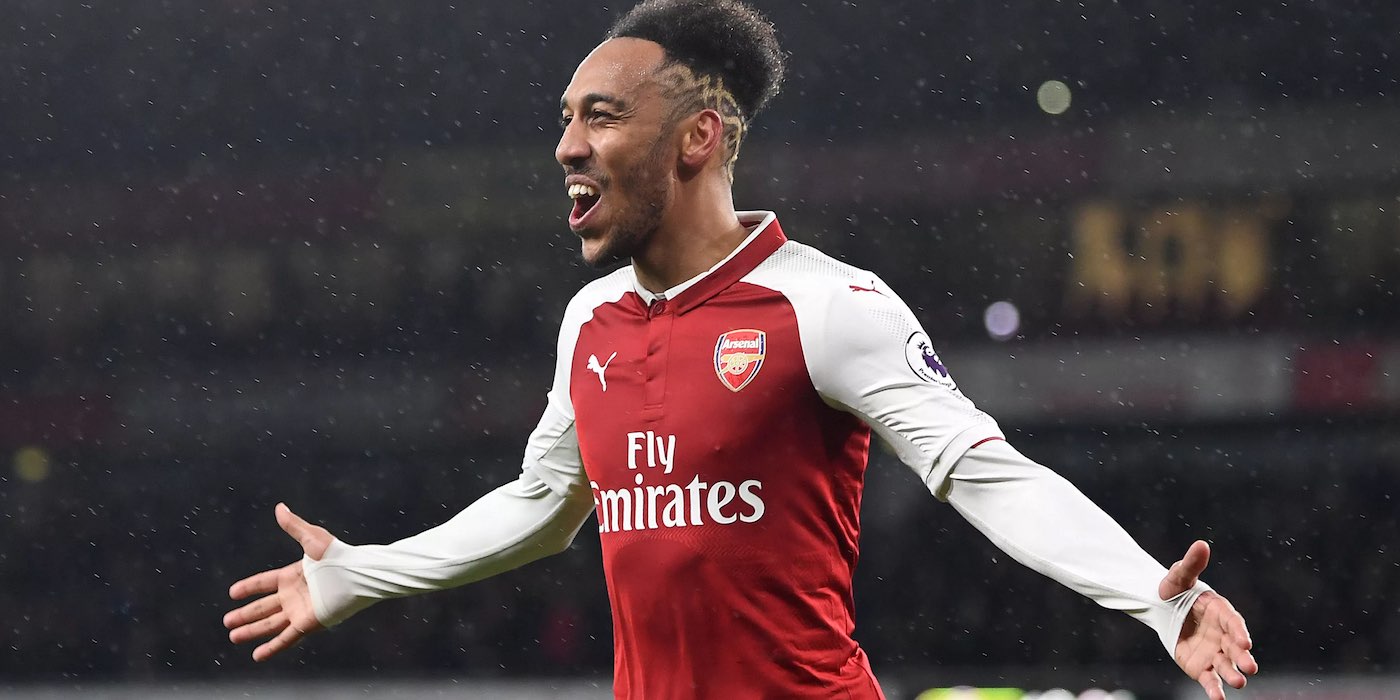 According to a report in The Times (£), two Chinese clubs are targetting Pierre-Emerick Aubameyang this summer.

Both Guangzhou Evergrande and Shanghai SIPG are apparently interested in the club’s top scorer, with our lack of Champions League football and a need to generate funds via the market an ecouragement to their hopes of securing a deal.

Of course the issue is whether or not the player himself would be open to a move there, but he seemed willing to make the jump before he joined Arsenal in January 2018.

It was widely reported that ​Guangzhou Evergrande had agreed a £60m fee with Borussia Dortmund for his services, but ultimately the Gabon international switched to North London and has become an integral part of the team since.

Aubameyang will be 30 shortly, but until such time he remains 29, and if the right offer came in you could see why Arsenal might be tempted to cash in and reinvest.

However, it would put a huge dent in the squad, and Auba’s popularity within the dressing room and around the club is also a consideration for the hierarchy should any bid be forthcoming.

It all sounds quite spurious to us, so we’re giving this one a sloppy 9 on the Poo-o-Meter.

Although, spurious deserves to be no.10 on the poometer

The poo-o-meter is based on the accuracy of the news or what we prefer?

The likelihood that the report as actually complete shit.

Times being what they are, isn’t that about the same thing?
Haha. Ha.
ha.

*Response to henry above..

Spuds denying that incredible young Ajax team the CL final has to be one of the greatest sporting injustices in modern times. What would have been a classic turned into a 85 minute joke. I can’t name a convincing performance they put in in the whole tournament. Wankers.

If he leaves, we would just have to take it on the Chin-a.

I’m sure the size of the trucks of cash would make him feel forEvergrande.

(Or his agent anyway.)

Too Drunk To Be Offside
Reply to  Akkimaniac7

If the mega rich club offers $2 billion USD which Kroenke guarantees will all go towards squad rebuilding, I will do it.

For 100million, let Auba go. We still have Laca and can reinvest into 4 promising young star, just like the old days when we buy Cesc, Nasri, v Persie, et al. Look at what Coutinho money to Liverpool.

Emphasis on the “if”

I can see him leaving this summer. It makes sense to sell him and reinvest because Stan won’t be spending his own money on our squad. I hope he joins a Barcelona or a Man City he deserves to win some trophies.

There is no way this isn’t a troll

90m or no sale. (How many years has he got on his contract?)

Olatunji Ogunbiyi
Reply to  Ya gooner

2 years I think, which puts him in what I call then “Vinai Zone”…

If he goes, does that make Laca move more likely? Can we do a Liverpuddle and use the, say, £140m effectively? Are fans prepared to wait 2/3 years for that?

Or would it cast us into mid-table with no hope of goals scored to offset defensive frailties whilst KSE rake in the profits?

I can’t see us moving on BOTH of our strikers. It’s either one or (preferably) none.

I imagine it would be tough to reinvest properly without a Technical Director actually working from the club offices. But random shots in the dark we can do. Roll them dice!

I’m guessing scenario B.
I feel confident in that educated guess.

Thanks for your interest but not today thank you. On the other hand can we interest you in something else from our range we have a list of others that might take your eye. Mustafi, Ozil Mkyitharian, Kolasinac, Xhaka, Iwobi, all for a reasonable price and a number of others you could pick up for peanuts.

Dont be mean to Iwobi. Seems like he was the only that cared, in what was the most important game of the season.

Yeah I wouldn’t look to sell Iwobi yet either, though he might benefit from a change in position.

And that petulant Mkhi wasn’t even there!

Torreira was crying his eyes out, I think that shows he cares!!

Not being mean just realistic, not good enough to be a starter a squad player at best. One goal doesn’t make up for a generally poor season. Started OK but went back to bad decision making with the ball and general sloppy play. If we can get a few quid for him it will be all profit less the wage he’s been paid.

Well, I guess I’d go if I were in his shoes. An increase of £100k brings his salary close to slightly less than $500k a week. That is some crazy money.

At what prize should we start considering it? I would say at 60-70 mio pound.

Its me
Reply to  adam

Any money right now must seem tempting, but to split up the only real positive of this season seems crazy to me. We wouldn’t be able to replace anywhere near the output these guys give us with the money.

Maybe I would have been more confident that we could do that if we had, you know, a head of recruitment or something.

I’d let him go for silly money. But then again, I don’t trust this new regime to allow it to be spent. More than likely we’d see it gobbled up in new ‘advisory services’.

You’ve nailed it mate, I think we’d all be ok with a sale if we had confidence that the money was effectively reinvested – however….

You mean like the way £55m was used on buying a striker 18 months ago?

100 million ish would be acceptable

98+% of transfer rumours don’t happen. So most are a waste of time to follow including, I suspect, this one.

Best to take a rest over the summer, recharge our batteries and come back once we actually know what’s happened.

What are you smoking? I’ve been wasting my time since last August with all this football nonsense waiting for the important stuff to get here!

Arsenal’s squad is currently unbalanced, very strong in attack and very weak in defence. The midfield is so-so. Arsenal have three attacking superstars who rarely get any service. Hence, how much it does hurt, if the owners are unwilling (or unable) to cough up, I would actually be willing to part with one of our attacking stars. In Eddie (and maybe Danny) we have backup in attack. In defence, we have nothing to back up.

Welbeck is still listed among our first team players on Arsenal.com. I cannot find any information linking him to a new club or retirement. As we speak, I guess he is still an Arsenal player.

I guess that means that Cech and Ramsey are staying too, seeing as they’re still on the team list on the website?

His contract expired. We’d have heard now if he was staying, I believe.

Sorry, I’m struggling to think who the 3rd attacking star is…?

I think any offer above £80m should be taken, but only if that is reinvested into the squad. Problem is our strike force was covering alot of holes that need to be filled with proper acquisitions it is no more Wenger era when we would sell top players and still make it to the Champions League. Now we need to purchase proper replacements and need to fill these holes which don’t allow us to reach our potential.

Moving him on now would make sense. If we could get a big fee for a 30-year-old and then reinvest it in the squad then it could be a nice piece of business. We need a couple of quality defenders and Stan isn’t going to pay for them.

And if I was Auba I would go: this is his last big move. One last lucrative contract in China would be a smart way to finish your career. Besides: Arsenal are going nowhere under Stan.

If he goes, Laca will not stay long.

Too many people living in dream land. They want this and that player sold and they want to fill 6 or 7 positions. We have a “LIMITED” budget bc of lack of CL. It is an IF that we can sell on Ozil (or Mhkitaryan) to generate money. We can barely even sell Elneny and Jenkinson. Mustafi or Chambers may be sold but likely one will have to be kept even with a new Cback + Sokratis + Holding (and Monreal) We are likely NOT going to get a Rback. AMN has done decent for a first season. It IS… Read more »

We could just about pull that off by adding 60M from an Auba sale with our mooted 40M “warchest”. We’d have to roll the dice and hit 3 times. But if we dont sell Auba, we have zero chance of signing 3 decent players, the squad will stagnated further, our saleable assets will be depreciated, and we’ll be in the same position with less options. For my money, we have to sell him. We all wanted to see Arsenal be more ruthless in the transfer market and this is what it looks like. I’m sure Liverpool hated selling Suarez and… Read more »

If we can get the maximum fee it will be great.

I think Chinese clubs are banned from paying big transfer fees these days. Is’nt that why Sergio Ramos asked if he could get out of Madrid on a free?