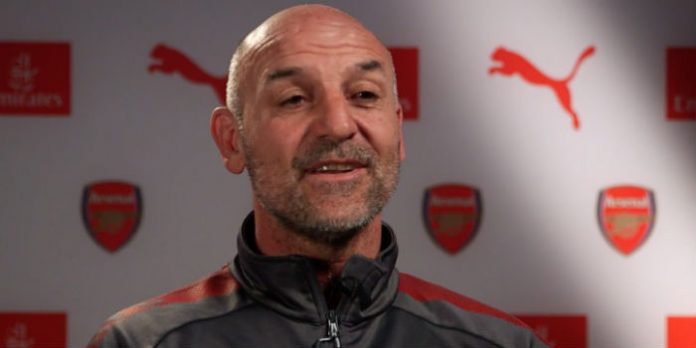 It is seven years since Steve Bould last managed an Arsenal youth side, but that could be set to change, with the former Gunners defender reportedly in line to take over from Freddie Ljungberg as the club’s U23 coach.

If Bould does find himself back in the dugout it will be intriguing to see how his coaching style has changed since 2012, and whether he can help to accelerate the development of a crop of extremely exciting young prospects.

Bould initially rejoined Arsenal as a youth coach in 2001 and worked his way up to eventually take charge of the U18s, whom he led to successive league titles in 2008-09 and 2009-10, in addition to winning the FA Youth Cup in 2009.

During that time Bould oversaw the progress of some very talented players, including Jack Wilshere and Wojciech Szczesny, while he also coached the likes of Jay Emmanuel-Thomas, Sanchez Watt and Henri Lansbury, who were very highly regarded at the time.

None of the players that 56-year-old previously coached are still in the youth set-up, indeed Hector Bellerin is the only individual still at the club that played under Bould.

Given that he is no stranger to youth football, Bould shouldn’t have a problem adapting to coaching the U23s.

In his time in charge of the U18s he prioritised a free-flowing, attacking style of play and implemented a 4-2-3-1 formation long before it was used by the first-team.

Wingers like Bukayo Saka and Xavier Amaechi should especially enjoy working under him, as well as creative talents such as Ben Cottrell.

Arsenal U18s were always vulnerable defensively under Bould’s guidance, although in truth the U23s did also concede with regularity under Ljungberg this campaign.

It will certainly be interesting to see whether Bould puts his own stamp on the team or whether he instead finds himself under instructions to play a similar style of football to the one preferred by Unai Emery, as Ljungberg seemingly did.

Whereas Ljungberg only criticised his players rarely last season, Bould wasn’t afraid to shout at individuals when managing the U18s, and on some occasions gave them an expletive-laden debrief on the pitch after the game before heading back to the dressing room.

One thing that Bould certainly possesses is vast experience of coaching at youth level and a detailed understanding of the difficulties that young players face, with some of those who worked under him before no longer in the game.

If he does become the new coach of Arsenal U23s then it could well prove to be an inspired appointment, although the squad will inevitably had to undergo another period of adaptation.

he couldn’t when he was in charge of them. He is a failure and needs to go

There’s a reason why Stan is called silent…perhaps you should follow his example?

You couldn’t make it as far as the third sentence?

He can’t open a can of tuna.

He could not fix our defense.

Fixing our defence was never his job.

And you know that, how?

Because it’s been confirmed plenty of times, particularly as he was our u23 coach, that he’s a coach, not a defensive coach.

It’s like assuming Henry must’ve been our “striking coach” just because of his player history.

That’s not how football, or coaching works.

Talking about this, Henry used to say he studied how Ian Wright scored goals and that Wright was his role model. What if our strikers were studying how Henry scores goals (at least Iwobi) and our defenders, Tony Adams or Campbell? Can they put their oversized ego aside for a second and do this?

If you are hired to work for an organization, do you often tell your boss how to do their job?

Surely our coaches jobs are to improve all aspects of our team?
What exactly has he been doing since he took over from Pat Rice?
Genuine question, what exactly is our assistant managers role? If it’s not to improve our defence?
Surely that has to be somewhere in his job description….

I suspect the manager gives him the plan, and Bouldy executes it. Probably no room for individual ideals as an assistant manager.

It’s so grating, and must get tedious having to explain this. I swear, football fans are the most frustrating to deal with at times.

Excellent points made by Bird. Bould’s transition to U-23 really makes more sense and our staff get more first team experience. I can only see more positive things from these internal moves. Fingers crossed we see more youth players making the step up to the first team.

Many people see Bould as a scapegoat for our defensive instability in recent years given that he is a former defender. However, given that he was an assistant, and not the manager/head coach, the blame never really lied with him in the first place, as any advice he would give in training sessions or during matches could still be overruled by his boss (ie the manager). This positional change is also seen by many as a demotion for Bould, as he is moving from the first team to the youth team. I can understand this position, but I do not… Read more »

Steve Bould looks so miserable all the time I find it hard to understand how he could ever motivate anyone. Maybe there’s another side to him, but for me he’s always been uninspiring and I thought the club would take the opportunity to move him on this summer. We’ll see how he gets on but I think he’s a step down from Freddie for the youngsters.

Yes, but playing and coaching are very different.

With his experience I can only hope he can…

Is it me or does Steve Bould look a bit like Albert Steptoe in this picture? Sorry not helpful.

Short answer: yes, he can.

Yes, yes, all very interesting no doubt, but more to the point, the penny’s finally dropped: Bouldy looks like Baldrick from Blackadder.

kas
Reply to  Up For Grabs

Don’t tell me ‘He’s got a cunning plan’!