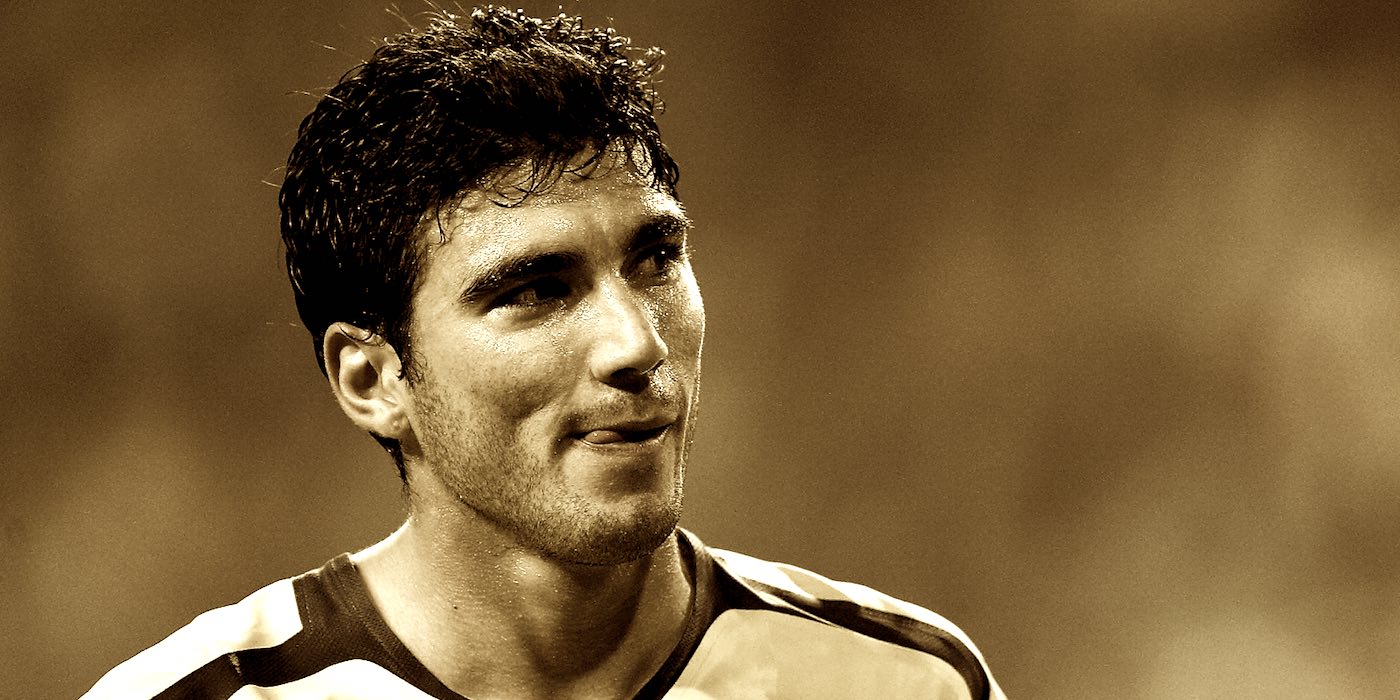 There’s tragic news from Spain this morning with reports of the death of former Gunner Jose Antonio Reyes.

The 35-year-old was involved in a car accident in Sevilla last night, and has died.

In an announcement on Twitter, Sevilla FC said, “We couldn’t be confirming worse news. Our beloved Sevilla star José Antonio Reyes has died in a traffic collision. Rest in peace.”

Reyes was, of course, a member of the Invincibles, joining from Sevilla in the winter of January 2004, and he announced himself in grand style with a wonderful goal in the FA Cup against Chelsea. He scored both the Arsenal goals that day and made a significant contribution to that unbeaten season.

It’s awful news, and all we can do is send our warmest thoughts to his family, friends and the many colleagues he’s had in football down the years.

Thanks for what you gave us, and rest in peace.

Ceballos reveals he spoke to Reyes’ father before joining Arsenal

Crucial goals in the unbeaten run and most handsome player in my mum’s opinion.

Never been so excited about a transfer as I was with this dude. And he did not disappoint. Terrific footballer that gave us the much needed momentum to finish our record making invincibles season.

R.I.P JOSE
ONCE AN INVINCIBLE, ALWAYS A LEGEND.

His goal in the game against Boro in August 2004 where we equalled Forest’s unbeaten record will forever be one of my favourites. We were 3-1 down, Pires had just equalised and as Sky were still showing replays of that, Bergkamp slipped in Reyes, he sat the defender on his arse and hammered it into the top corner (with his right foot as well). Martin Tyler’s commentary of “Here they come again…it’s REYES! Stand up for the champions!” always gives me goosebumps.

Yes I was there too. Remember it so well. I loved when they sang his song.

@smudger fantastic memories. And a great recollection of that match. I was in the lower stand of the North Bank that day in the warm sunshine. RIPJose ?

Reyes was a fantastic player, loved him, his goals will stick in the memory. An Invincible, helped us get over the line that season.

[How good was Pires – see the video – on the first goal made the pass to Reyes and then got to the left of the goal as Reyes scored.]

From Turkey Fan of “BESIKTAS”. aka “CARSI” we share your lost. RIP REYES…

It really does. This news has stopped me in my tracks. I’m so sorry that it should ever take something like this to remind us that this is all just a game.

Same. Was in the gym this morning and it knocked me for six.
Put me in a really nihilistic mood because ultimately, we spend so much time and energy (and money!) into the current plight of Arsenal, and for what? In the grand scheme of things, it isn’t worth it.

Makes me wonder why I put so much time and effort into something that causes me so much grief?

I hear that… and I’m not sure your comment should be down voted in any way.

I know many people ‘live and die’ Arsenal, but that’s no excuse for not respecting somebody else’s honest feelings about the effect that following Arsenal has on them.

Complete respect for being genuine and airing genuine feelings in a public forum.

Respect? Your comment suggests no-one should vote the comment down. Why? Does not everyone have an opinion and a right on forum to highlight if they disagree or agree? A thumb’s down does not mean you don’t respect the person making the comment, it merely means you are disagreeing with the person on this particular comment. Keep the bench warm upstairs for me ,Jose.

In my time as an Arsenal fan, I can’t remember being more excited and shocked at a signing like the one of Reyes.
Now this is a big shock and very saddening.

Yes massively shocking…… I am speechless TBH.
That is why I always feel life is not all about the destiny but about the journey….. Enjoy each and every moment as it comes and live in the present!!!

I assume you were too young or not born when Bergkamp signed.

RIP ? one of my real Arsenal heroes

Horrible news. I loved him when he played for us. RIP Jose.

Tragic news. He came across as a really nice guy who loved playing football.

What cunt would down vote this.? You know who you are , you cunt.

5 Spuds trolls – class is permanents, as is the lack of it.

I’m so shocked and sad at this news. RIP Jose, thanks for the memories x

Devastating. I remember how excited I was when I heard we’d signed him. I’d watched him play for Sevilla a few times. Brilliant player and unfairly treated and set-up by the media in the UK. R.I.P. Jose Antonio.

Makes you wish for a heaven… him and Puerta are immortal for Sevilla and should be reunited somehow.

This is awful. Such a good exciting player for Arsenal and so tragic for this to happen to someone so young.

Saw him played with The Invincibles, an amazing player!

Not funny. I hope you get cancer. CUNT.

Dude, wishing cancer on someone who downvoted a comment about someone else dying isn’t really the right response.

It doesn’t matter if someone is idiotic or heartless enough to give a thumbs down. Literally. It’s so irrelevant. Just ignore it.

Makes me so fucking angry blogs. My wife, in remission and one of life’s most beautiful people has the bad luck cloud stop above her when it should sit above that idiot. It’s the little things. So I stand my original comment.

@Chrispy – I understand the anger but unfortunately there are always going to be idiots on the Internet. Ignoring them as much as possible is the best solution.

Plus, some down votes are due to big fingers on small touch screens. This is very very sad. He probably has young kids.

Shocking news. He was a fantastic player and despite leaving us so soon I always checked up on how he was doing in Spain. So sad and his family must be devastated. I hope they find the strength they need to get through this. RIP.

Oh no, not this terrible sh*t again. Maybe some of you heard about the death of Czech player Josef Sural. He started his career in my hometown club Zbrojovka Brno a few years back (after that played for Sparta Prague and Czech national team alongside Rosicky). He died in a traffic accident in Turkey a month ago. And now this. Sad, sad news. Rest in peace Jose.

One of my first memories of watching Arsenal was his goal against Chelsea above. RIP

Was leaving a game in the real Clock End ,when Jose and Lauren walked through the supporters, probably coming down from a box above (both were out injured). Everone started singing the Jose song and he was laughing and shaking people’s hands He seemed genuinely touched and was very down to earth (as was Ralph who’s foot I managed to tread on). A great memory and I’m in the verge of tears writing this. Charlie, Hammersmith.

Someone asked me to name the invincible team the other day…. they had to ask me who Ralphie was when I named him at right back.

On behalf of all Arsenal fans in Zambia I send my heartfelt condolences to his family and the entire Arsenal family.

Can’t believe this. Remember last seeing him in the testimonial against Real Madrid last year.
As though our shitty season couldn’t get any shittier, now this. Devestating news. RIP Jose. Our legend, we’ll never forget your role in that memorable 2003-2004 season. Invincible forever !

Woke up to this sad news. Best wishes and strenght to his family in this hard moments and might his soul find peace.

Shocking news – a truly gifted and exciting player who helped to see the invincibles over the line; so very sad. RIP José..

Awful news. Thoughts with his family and friends. Gone way too soon. An underrated part of the team who scored quite a few important goals. RIP Jose.

I started supporting Arsenal as a 9 year old in late 2002 and got an Arsenal kit with a no. 9 and my name on the back because I thought the number was vacant. At school the more seasoned 10 year olds asked why on earth I had Franny Jeffers’ kit number, a blow to my nascent kudos. A year later the decision paid off when we signed Reyes, the first time I experienced that incredible ‘new signing’ feeling. All the anticipation and excitement about what this Spanish wonderkid would do on the pitch. On the tarmac at playtime, clumsily… Read more »

Beautiful comment… genuinely touching to think of all the lives he had an impact on. I remember the excitement when we signed him when I was a teenager.. never forget how he tore it up in the charity shield match the year after. RIP

I think that comment sums it all up kinda puts things into perspective really. Yes the season has ended badly, but this news really shows whats more important. RIP Jose 🙁

This is a brilliant tribute and really nicely written, thanks.

When I think back to the good times, the signing of Reyes was the absolute peak of it all. We were the best team in the world, signing an incredibly exciting, dynamic young player. He added so much to an already brilliant team. It was my first season with a season ticket. Football has never meant more to me than it did then. He holds a special place in my memory.

It’s so sad that he’s gone so young.

Horrible news. A player from my era. Always looked like he loved the game and not the money.
Always smiling. Very sad day.

Jose gave us many memorable moments. He will always be remembered in the storied history of The Arsenal

RIP Jose. Thank you for your contribution to our great club. ❤️

Shocked to hear the news. Thankyou for the memories Jose. Once a gunner always a gunner x

Horrible news. Really got the bad chills when i first heard it a few hours ago.

Fantastic player and seemed to be a very good man.

Condolences. This is so sad.

I’ll never forget drunkenly screaming his song through his car window after a game at Highbury. I couldn’t even tell you who we’d played or what the result was now but I do remember me and my mate being very excited to see him and jose looking slightly scared. RIP Jose Antonio ‘invincible’ Reyes!

A player tailor made for EPL. Was so sad that he left us right after our French God, whom he replaced.
RIP

I think fans of a certain age will remember Reyes as one of the first truly exciting signings we witnessed. It might not have worked out, but his banger against Chelsea will live long in the memory. An awful tragedy that really hit me in the gut.