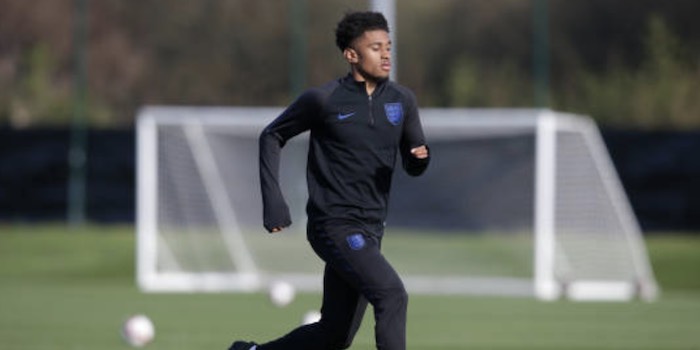 England’s European U21 Championships campaign gets underway on Tuesday when they face France in the Report Stadio Dino Manuzzi, Cesena.

Arsenal fans will keep an eye on this one, because of the potential involvement of Reiss Nelson, and also the fact that Matteo Guendouzi and former Gunner The Jeff could be involved for the French.

It’s a game that the 19 year old is excited about, and he’s revealed he’s had some messages from his teammates past and present as they gear up for what’s sure to be an exciting encounter.

“France are a very good team with good individuals, a couple of them I know from Arsenal who have gone on like Jeff and Matteo,” he said

“They’ve given me a bit of stick but I think it will be a very good game to watch. They just told me I have to be ready for the game and may the best team win, nice messages to be honest.

“They are confident guys. A lot of them are playing regularly at first-team level so they have that confidence but we have that too.

“It will be a very good game.”

Last night, Krystian Bielik scored for Poland as they beat Belgium 3-2. Playing in central defence he put in an impressive performance, something that the Arsenal coaching staff will no doubt have paid attention to as he looks to nail down a place in the first team squad next season.

Will be tough, France are very strong but there is hope for England too, lots of good players coming up. I hope Reiss plays and impresses.

And well done Krystian, hope you make it at Arsenal too.

Although we are backed into a corner somewhat, having to look to the development of youth rather than buying ready-made superstars, I am excited about what we have coming through. Would love to see both Nelson and Bielik getting a chance next season. Would love even more to see them grab it with both hands and have a massive impact.

Agree with you but for some reason, I just do not have full confidence in Emery to manage transition to youth.

Would they? Doesn’t feel like they’re even paying attention most times.

We should be locking him down to next season now. Not sure what the transfer team is doing. Plus wasting time on a league two player bc they think we had benefit with Guendouzi. Lorient isn’t Monaco two or three seasons past. We should be getting proven players at this juncture especially if we are cycling Nelson into the team. BUT also to mitigate against risk. Just think West Ham is buying highly promising Pablo Fornals and we are shopping at Tescos sales section. That’s OK if its one player but we may compound the risk with bringing in a… Read more »

That was underwhelming from an Arsenal point of view – neither Reiss, nor Matteo played.