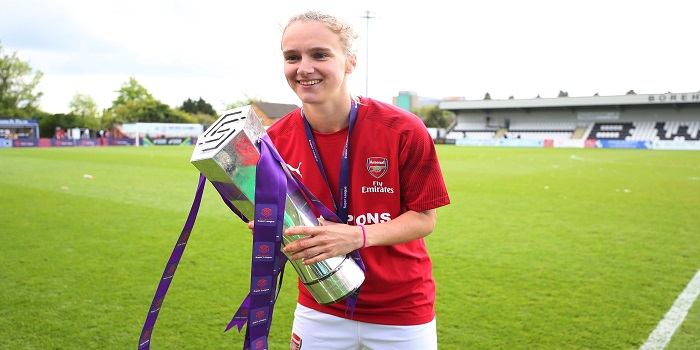 This weekend, Arsenal striker Vivianne Miedema broke the goal scoring record for the Netherlands. Her two strikes against Cameroon at the World Cup took her past Manon Melis’ total of 59 goals for Holland. Mellis achieved this total in 136 appearances. Miedema has managed it in 77. She doesn’t turn 23 until July.

When Arsenal secured Miedema’s signature in 2017, I referred to her as ‘possibly the best striker in Europe.’ She arrived back late and injured for pre-season in 2017-18 having fired her country to Euro 2017 glory on home soil. Her first season was injury hit, but still impressive, scoring the winning goal in the 2018 League Cup final against Manchester City despite carrying an injury.

In 2018-19 Miedema has been fit and firing, breaking the WSL record for goals scored in a season by January. Her goals shot the Gunners to their first title since 2012. Now, she has broken her country’s goal scoring record. So what makes Miedema such a phenomenon? Well, for a start, she is pretty much the perfect build for the striker.

Relatively tall, but lean. She has the physicality to hold opponents off and the speed to glide across the turf effortlessly. These attributes do not define her, however. They are servants instead of masters. She is technically super precise in everything she does. Miedema started life as a number 10 and it shows in her technique when she ghosts away from the frontline to knit play together.

Her grounding as a number 10 is very instructive when it comes to assessing her proficiency as a number 9. Miedema grew up as a Feyenoord fan and her absolute idol is Robin van Persie. It shows right down to her mannerisms. She studied his game so intently that she developed her left foot, even though she is naturally right footed. “Robin van Persie was my hero,” she says. “I loved watching him play for Feyenoord and I remember as soon as he moved to Arsenal I started supporting them and watching a lot of English football.”

This ambidexterity gives her great balance in the area. See below her goal in the League Cup semi-final against Manchester United, she shifts the ball effortlessly onto her left foot to make the angle for the shot. It is the most van Persie of goals. Miedema converted to a number 9 because Netherlands lacked good centre forwards and I think the fact that Miedema came to the number 9 role late is instructive.

? @VivianneMiedema scores again …and didn't she make sure of it!

On the occasions when I have interviewed her, what comes across is her insouciance. During last season Viv was locked in a battle for the Golden Boot with City forward Nikita Parris. Miedema was asked about her quest for the top scorer berth several times during last season and what came across was that she didn’t give a single shit about it. Famously, she rarely celebrates her goals. “It feels a bit disrespectful to the opposition,” she once pondered.

She broke that habit on Saturday with the world’s worst rolly polly to mark her record-breaking goal against Cameroon. She seemed almost apologetic when quizzed about it afterwards, “It was a goal at a World Cup. I think you’re allowed to go a little crazy.” This apologetic rolly polly- a promise she made to her brother Lars who plays for PEC Zwolle in the Eredivisie- qualifies as ‘going crazy.’

It sounds strange to say about such a prolific scorer but scoring goals does not seem to be a huge motivator for Miedema. To speak to her, you are not left with the impression that scoring goals gets her out of bed in the morning- winning does. To Miedema, goals are merely a means to an end. That serves her brilliantly, because she relaxes in front of goal. Look at her impudent goal against Everton back in April. Ice runs through veins, which means her finishing is never desperate or rushed.

Her laid-back nature comes across on and off the pitch, but she is very sharp mentally. Often, you won’t see her for the first 30 minutes of a game. It’s because she is working out the angles, assessing her prey. Quite often she will finish a game drifting constantly to the right or left flanks or by moving into a withdrawn role so that the likes of van de Donk and McCabe can run past her into the box.

Viv spends a lot of time working out where the space is. Once she has found it, she nests there. But she is more than just a poacher, she had 11 assists in the WSL last season. This is because of her unselfish play and her appreciation of space. Viv appreciates movement- her own and that of her teammates.

Sumptuous @ArsenalWFC football… they're turning on the style!@Katie_McCabe11 finishes nicely… what a pass from @VivianneMiedema ??

As she was congratulated and serenaded by her Netherlands teammates at the team meal on Saturday evening, Miedema cut a shy, reluctant figure uncomfortable with the spotlight. She repeatedly brushed off individual acclaim during last season. In an interview with Joe in February she said, “I don’t really care about individual prizes.

“Right now I’m focused on winning trophies with Arsenal. I’m more worried about winning trophies at club level and international level rather than individual prizes.” Viv is a clear thinker and a straight talker. In the same interview, she was candid about her country’s chances at the World Cup. “I should say I’m really confident but I’m not. It was really hard for us after the Euros to qualify directly again, to handle the pressure.” The first time I interviewed her, I asked her whether having three Dutch teammates at Arsenal informed her decision to join the club.

“That wasn’t so important,” she replied. “I went to Bayern when I was 17 and I was alone there so I knew I would be fine going somewhere without any Dutch players.” Miedema is as straight a talker as she is a shooter. She doesn’t deal in platitudes and she comes across as unflappable and wise beyond her years. In other words, her character is revealed to you fully in the way that she plays football.

Absolutely incredible player. Just a joy to have at the Arsenal.

We’ve got the arguably the best striker in the world. It’s good to associate something of that nature to Arsenal…. Been a whole while

I’ve got a real girl crush on Vivianne, she is undoubtedly a world class player and we are definitely fortunate to have her play for Arsenal. I hope more people watch the Women’s team next season. I was overjoyed when they lifted the title this season and I’m hoping they can put in a real challenge to retain the title next.

Same here! I remember seeing her at Euro women 2017 and saying to myself “how on earth have we managed to sign HER!”

Excellent read. Thanks to Arseblog, I’ve become somewhat like an expert in women football especially in the eyes of my friends. I’m actually enjoying this World Cup. Women football is steadily improving. Although I think more work need to be done on goalkeeping.

Goalkeeping and some of the general defending. Sometimes looks like all the women teams are coached by Mustafi. 😉
But good world cup and big media coverage is positive

She is something special, and we are so lucky to have her in Arsenal colours. The Netherlands-Canada match is going to be one of the tournament highlights on Thursday.

A fan of Van Persie but clearly mentally she’s a Bergkamp!

Stillness and speed… .
That is all.

Not much difference between RVP and Dennis. Both centre forwards nominally but in realify 10s rather thsn 9s. Score goals yes but they have the vision and skill to put others in front of the goalie to pit it in the bsck of thr net..

What a great analysis of her playing style and personality. Her intelligence is further revealed by her choice of Arsenal. Joe Montemurro’s Arsenal Women and Viv Miedema were made for each other .

A privilege to have Viv grace Borehamwood. How strange that sounds against Barcelona, Bayern Munich et al!!
A brilliant article Tim. Viv is so modest and she humbly recognises that success comes through having a team of exceptional players around her and a magician in Joe pulling the strings.