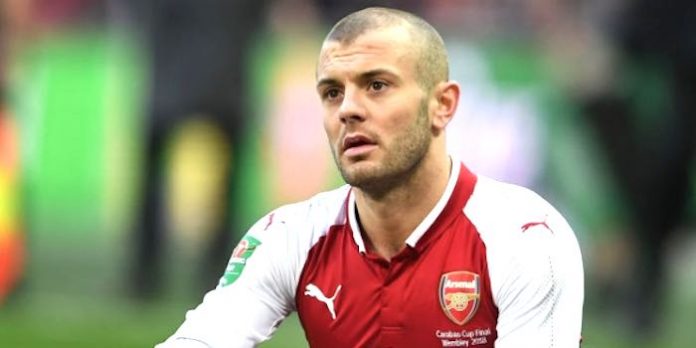 Jack Wilshere has revealed that worries over his son suffering seizures played a part in his absences from the Arsenal team as he looked to recover from a serious injury.

The midfielder, now at West Ham, credits Arsene Wenger for giving him time to spend with his family, but admits he found it hard to focus on football when his child was going through such a difficult time.

In an interview with Athlete’s Stance, he says it gave him perspective on what’s really important, and reminded people that there’s often a lot more going on behind the scenes than people know.

“It makes you realise that football is not everything,” he said after spending night after night awake, and at hospitals with Archie as he tried to come back from a broken leg suffered in training after a tackle from Gabriel.

“A few people knew. That’s why I speak so highly of Arsene Wenger as well because he was brilliant. He said to me, ‘Listen, you deal with your son, you take however long it takes’.

“This is why this injury took so long. People don’t realise that. They think you get injured and they say, ‘He’s always injured, he’s injury-prone, he’s never going to be fit’, but they don’t realise what goes on behind closed doors.

“For the first four, five months of that rehab I didn’t want to be rehabbing, I was in and out of hospitals.

“I wasn’t sleeping because of my son, and I didn’t really care, to be honest with you, because my main focus was him. I sort of switched off from the outside world a little bit.

“It makes you change the way you think about things and life, because anything can happen. And yeah I’m a footballer and it’s great – but family comes first, always.”

Jack endured another injury hit season after his move to the Hammers, but let’s hope he can stay fit and play regularly again. It’d be great to see him get a spell where he could remind people of his talent.

Watch the full interview below

I miss Jack being at our club.

While a different player .. If fit… He’d certainly go a long way to helping fill the Ramsay hole.

I AM ARSENAL
Reply to  Gooner G

You never know what’s going on in people’s lives. It’s too easy to apportion blame to players.

Fine, whatever, but doesn’t change the fact that he is injury-prone.

Yes, he is, we all know that, but it’s his little son he’s talking about here ffs, show some respect and dignity.

Yeah, okay. Put your box of tissues down and I’ll give you a hug while I’m at it. That way you can continue to miss the point/import of what Jack said completely. I really don’t care either way and in the end am happy not being a sanctimonious hypocrite.

But quite happy to be a sanctimonious prick?

No, you’re just a bell-end.

George. Has anyone ever told you, you sound like a total Dick? Everyone has problems, regardless of money made or job done. JW Is still a very young man and he was doing what was right for his family. This piece was not about being injury prone, it was about living life as a worried parent, coping with a sick child and acknowledging hi manager (AW) for the support. BTW, the guy left just under a year ago. I’m sure he acknowledges himself he could have been so much more when you consider the accolades heaped at his feet in… Read more »

You probably don’t have children.

I’d love to see Jack in an England shirt again…

Absolutely thought for a moment that this was saying Jack was in hospital with his son because Gabriel broke Archie’s leg with a tackle.

“at hospitals with Archie as he tried to come back from a broken leg suffered in training after a tackle from Gabriel.”

I’m not having a go at Jack but Most people in this circumstance have to do the nights and work the days.
Or they take unpaid leave (unless they have parental leave available)

Arsene Wenger and Arsenal both treated their player extremely well.

Just a much classier(less dicky) way of expressing it. Dick.

Basically you can´t compare football with normal jobs (at least the money involved). With longterm injuries normally insurance is kicking in with paying the wages after the sixth week. And with our history I guess we can be sure that the club is paying pretty heavy insurance fees, and it´s obviously worth it unfortunately due to our constant longterm injuries

As much as I felt for Jack while reading this, this also came across my mind as well. You might get say a month off max in similar circumstances at a great employer, but not 4-5 months. Not sure you can even use parental leave in these circumstances. And of course, a contractor would be totally screwed. Footballers really do live different lives to the rest of us.

None of that is to say I don’t sympathise with Jack, and it’s important to remember that footballers are human as well. He deserves immense respect. But it just struck me that a normal person in this situation would have had a much harder time of it. I don’t think most employers would provision for these events. Certainly not for almost half a year.

The job itself is very different to other jobs. players do a physical close contact work with movement for a sustained period of time every 4-6 days for months at a time (pulls, bruises, dislocations, twists, strains and breaks are regular conditions). So yeah the rules are bound to apply differently!

Maybe the problem isn’t that Jack gets special treatment when he has a family crisis, but that the rest of us don’t.

Before reminding people of his talent Wilshere should show people his talent… Oh yes, he did one great game 9 years ago in Barcelona…

It was eight (and a bit) years ago in London, actually. #pedant. One of the best three home games we’ve had at the Emirates. Unforgettable.

I was recently rewatching highlights of that game with wilshere Song and Fabregas. That midfield was quality even Song could pick out a pass over and over again now we have timid players like Xhaka and Torreira getting dominated by players like Jorginho

I think he was great that whole season, not just one game.

Ah there’s Alex again spewing the ‘hate’ he claims to be disgusted by when it’s about Ozil. Hypocrisy rules !

A Different George
Reply to  Kwame Ampadu Down

Actually (as someone who is a big admirer of both Ozil and Jack), this article made me wonder again about the effect of Ozil’s experiences last summer with the DFB and the German public. It’s not the same as a sick child, obviously, but I think the emotional and psychological effects of feeling your country has abandoned you and turned on you (please, no arguments about whether he was right in this perception–it doesn’t matter, because that was clearly *his* perception) were responsible for a good deal of Ozil’s difficulties, certainly in the first half of the season.

The thing is that Arsenal team that played Barcelona would absolutely sweep this current side including your favourite player! It would be a massacre.

Current team lacks sufficient technical quality. Some people in the media would deem to suggest we lack bottle but I don’t think we do. I think we have enough fight in some players (Laca, Sokratis even Granit) BUT we lack technical ability. Not that we are worse than previous teams but the entire league has caught up over the years. City, Chelsea (now Liverpool, and Spurs) have players equal to ours but added numbers. We are missing a player of exceptional technical ability on the wings (And this even with Nelson next season should he be included) and one in… Read more »

I’m happy that our organization and manager took care of the players. When I hear comments like this it emphasises the vast gulf of understanding between supporters and players. Everyone will eventually hit a difficult period. Marriage issues, sickness either personal or to loved ones, aging parents, lost job, raising teenagers etc etc. Any general person, on a decent but normal wage, is going to have to balance that hardship while still maintain their professional duties. You sell the big house, take a second job, drain yourself to near empty doing your day job and beside hand holding duties. That… Read more »

Puts some perspective on his loan at Bournemouth and his conversation with Emery before last season.

If any one here has had a sick kid you’ll know what comes first, sleepless nights and worry
– work, money even football takes a back seat all you want is your child to be alright, best of luck to him, he put his family first, well done Jack.

If I was in Jack’s shoes I would have done the same as most young millionaire footballers with financial security family would have come first. In the real world however most of us we are living week to week. A period of unemployment could be catastrophic. That being said the nightclubs drinking and smoking that we saw in the front and back of newspapers wasn’t professional but again we don’t know what was happening in his life. To bring it back to football though it just goes to show the tough job managers have to motivate multi millionaires to kick… Read more »

I just want to say how nice it is that every dark secret that comes out involving Arsene Wenger is always something revealing what a decent human being he is.

Indeed, the issue seems to have been that Wenger was a múch better human being than these guys were footballers.

If only we had a fully fit jsck and ram. They would surely be our midfield axis, with torreira sitting behind them and laca and auba up front, we’d be beast! Oh well… one can dream

I agree, family first over anything. But, let’s be honest now. Jack was/is injury prone

He had our genuine interest always Arsenal true and through. BUT injury plagued alas much like Diaby and several others (including RVP, Ramsey, Walcott) At the moment, we need a CM of (Technical) quality. Too many people have deluded themselves into thinking Torreira was a great signing. He has been an OK signing but the sort we need off the bench in lieu of Elneny quality (or lack thereof) Guendouzi has been IMO a great signing if he can keep trajectory, plenty of potential. Granit has improved but remains (at the moment) critical to midfield bc of passing range. He… Read more »