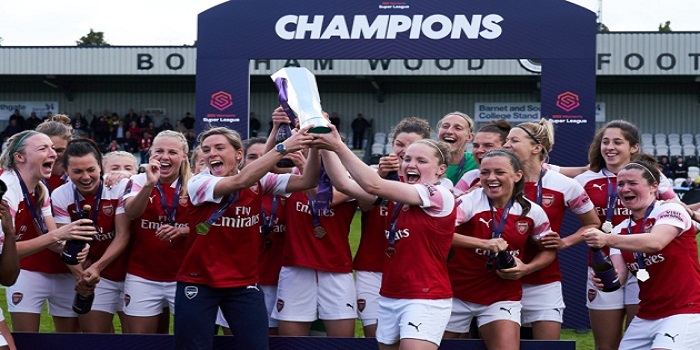 You may have heard announcements yesterday that Manchester City Women v Manchester United Women will be hosted at the Etihad Stadium on the opening day of the WSL season on Sunday, 8th September in an attempt to capitalise on interest in this summer’s Women’s World Cup. Chelsea Women v Tottenham Hotspur Women will be played at Stamford Bridge on the opening weekend too, with free admission.

After shining on the #FIFAWWC stage…✨ @ellsbells89 is ready to light up the Etihad! ?? pic.twitter.com/p9RPFY8o3l

Arsenal will not be following suit with their opening fixture at home to West Ham United, which will be played at Boreham Wood’s revamped Meadow Park Ground on Sunday, 8th September at 2.30pm. However, Arsenal are slightly ahead of the World Cup curve, with the women taking part in this summer’s Emirates Cup. They will play Bayern Munich Frauen, from whom they have signed three players this summer.

2️⃣0️⃣ days to go until the Emirates Cup! ?

? Got your tickets yet? They remain on sale ?

Arsenal will play Bayern at 12.30pm, with the men’s team playing Lyon at 3.15pm. Arsenal are focused on the making the Emirates Cup successful and will consider further double headers between the men’s and women’s team later in the season. Contacted for comment by Arseblog News, manager Joe Montemurro said, “We are really proud to be playing at Emirates Stadium in the Emirates Cup this month, it’s one of the first times that a club has incorporated the men and women’s sides into a tournament, so we are excited to be involved.

“This game will showcase some of the highest quality within elite women’s football and by playing this at Emirates Stadium it will enable more Arsenal supporters to see them in action. We hope that this brings plenty of fans to this game and then hopefully there will be potential for more double header games at Emirates Stadium.”

With Spurs and Manchester United promoted to the WSL for this season, there is certainly scope for some large crowds. But the message is clear, if you want the Arsenal Women playing at the Emirates to happen more often, make the case! Turn up at the Emirates Cup and be in your seat by 12.30pm! Tickets are on sale here.

The full fixture list for the WSL season will be released at 10am on Wednesday.

if the women game is as appealing, entertaining and rigorous as the men’s game, then why do they have to piggy bank them onto men’s scheduling?

And surely if you want to build on the interest in the summer, then why would you put it on the same day as the men’s team?

If people had the choice, who would really choose to watch a men’s game over a women’s?

“f the women game is as appealing, entertaining and rigorous as the men’s game, then why do they have to piggy bank them onto men’s scheduling?”

Because they want to show people that and this is a captive audience?

Also, the women’s staff are separate to the men’;s staff. The staff at AWFC is not big and organising a game at the Emirates takes a significant amount of resource. It makes total sense for them to lean onto the men’s resource because they have the staff to cope with it easily.

And youre a gyncologist for clowns

Heyyyy, did you just write this to try to sound smart without knowing what it actually means?

let me spell it out for you can a live supporter go to both games? This scheduling change will force a them to go to one or the other. I put it to you, and the rest of the predominately male try hard virtue signalling female footballing brigade that a fan who goes to one will not go to the other. And in the case a gain is matched by a loss on the other side. I can send you a link outlining this further if you want. but i guess because i haven’t written “yeah ladies football, AMAZING see… Read more »

Fart, I agree that when women’s matches clash with men’s matches of the same club, fans of both teams will prioritise attending the men’s match – on the whole. That is a scheduling problem which the powers that be handle rather ineptly. But that doesn’t apply in this case because it’s a doubleheader. And the point about going after the same base is valid, but don’t forget that Arsenal Women have their own fans for whom they would always come first – regardless of the men’s matches. That supporter base, which includes a higher proportion of women and children, especially… Read more »

Wtf are you talking about. The point is to have double headers, at the Emirates stadium, so people who are going to the stadium anyways, can see two matches for the price of one. How will having the womens play before the mens at the Emirates, make people choose one or the other live matches to goto… it just means that people who want to come early to support the womens team can? If they dont, just show up normal time to watch the men?

Great idea – more people watching the women’s game.
What’s not to like ?

I’m hoping to get to the Emirates and seeing the women excites me probably more than the men to be honest.

Keen to see both teams at the Emirates cup, and this is the season im gonna try to get to some women’s games, living in borehamwood I’ve got no excuse not to

Arsenal should sign Alex Morgan and Christen Press, for footballing reasons of course… fill up a lot of empty seats sharply with that kind of talent on display

Unfortunately the US women’s team members have an arrangement with US Soccer and the domestic league where the national team pays a significant amount of their salaries in exchange for the league letting them off when it’s not required by FIFA or CONCACAF for camps and extra matches. That makes it very difficult for any of the US players to go abroad except in short stints. Lindsey Horan made a splash when she went to PSG right out of high school, skipping college (the usual development route), but she was basically forced to come back and play in the NWSL… Read more »

Of course we had HAO briefly!

Ah, I’ve gotta admit I was just making a stupid joke because they’re both really sexy…but thanks for this educational insight.

Thanks for the explanation.

That’s how US players end up with 280 caps because their international team is run almost like a club side.
Also playing so many games together means they are much better prepared for tournaments like the World Cup and Olympics.
However, the Europeans are closing in and as demonstrated by the semi final last week. If Ellen White had been a couple of inches slower chasing the through ball and Steph Houton had scored the penalty like she normally does the Lionesses would have beaten USA and been in the World Cup Final!

So frustrating. I think I’ve only missed one Emirates Cup since the comp started but I can’t come to the most exciting edition of it yet! Aaargh.