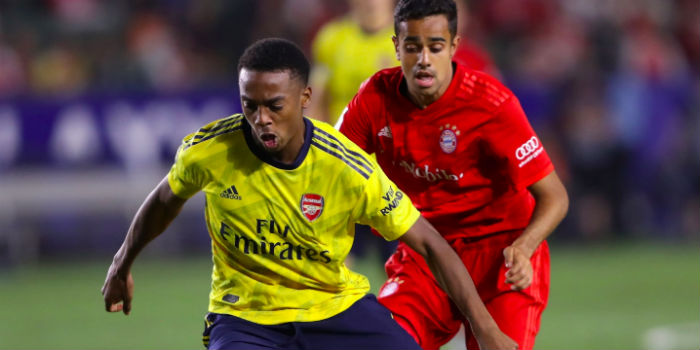 Unai Emery says he’s very pleased with Joe Willock’s development in the last 12 months and urged the 19-year-old to keep working hard ahead of the new season.

After featuring 17 times for the Gunners over the last two season, the England under-20 international was recently promoted to the first team and given a new squad number.

Part of the squad touring the US, the England under-20 international put in an eye-catching performance in the centre of midfield against Bayern Munich on Wednesday night and will be hoping for more game time against Fiorentina and Real Madrid.

He must know that with Aaron Ramsey departing and Lucas Torreira, Matteo Guendouzi and Alex Iwobi yet to start pre-season training, that a starting berth is up for grabs when the new season starts in three weeks time.

In an interview with Arsenal.com, Emery touched on Willock’s improvement.

“It’s all progress with him because last year he started with us in the pre-season,” he said.

“His performance today is very different to last year, maybe because he knows our idea and spirit better.

“He’s got a very big motivation and a very big ambition individually to make good performances, and he listens a lot to our idea. We are speaking a lot to him individually, with [Juan Carlos] Carcedo, with me.

“I really, really think that he made one more step last year during the season and he finished it very well with us, playing 12 minutes in the final against Chelsea with a big performance.

“We now want him to take another step more in his capacity to be with us, with a big help in our performance and our idea.”

I see a lot of people seem to want a Ramsey replacement, But is that a depth and numbers thing, or do people want a player similar to Ramsey? We haven’t really functioned well consistently, with Ramsey in midfield, so another player to provide us with a disjointed two in midfield seems like shooting ourselves in the foot just to praise Ramsey’s strengths. I like Willock and I hoped he, alongside Ben Sheaf, would be given more opportunities by now. We already have Guendouzi who is such a special young player, so we have the makings of a very talented… Read more »

All of our good performance have come with Ramsey in the team last year and the team fell apart when he was injured.
It is not just the goals it was the creativity,attitude and bravery that needs replacement. Having a runner midfield with no end product and creativity is plain boring. Willock does slightly excite me though than Guendouzi.

My Cousin Vinai
Reply to  Sam

Liverpool literally have a midfield 3 of runners with little end product. Hasn’t done too badly for them tbf. .

Savage
Reply to  My Cousin Vinai

And two big goalscorers – that helps a lot. I guess we have that too.

We lack runners without Ramsey, it’s not Ozil’s or Mkhitaryan’s games to get in behind, and whilst Mkhitaryan can carry the ball, he’s not a real specialist, and Ozil prefers the game played in front of him. We’re desperate for a couple of ball carriers who can dribble and drive us forward, we’re also desperate for some width. It’s the reason Zaha makes a lot of sense, He’s a ball carrier and a dribbler, in terms of the characteristics-we were lacking in the squad last season, he’s a perfect fit, at a good age, and PL ready. Willock looks like… Read more »

Wow this makes a lot of sense

Yes and no, the same could be said of Rob Holding. Were we not unbetaen with him in the team?

Rob did actually have a great run of form until that crappy injury, 2 years ago was 1 step back for him, but last year he was on course to go move 3 steps forward

Bravery, desire to make the difference and willing to take risks both in runs and with creative solutions is indeed what we lost with Ramsey, I am not sure Willock is as creative, but he certainly is brave and especially skilled in penetrating defenses and reading the game

My Cousin Vinai
Reply to  Devlin

I think sadly, most fans only see things through the past and can’t really see something new. I guess that’s why most fans aren’t coaches. It’s like when Vieira got replaced by Cesc, many initially couldn’t believe the idea of Cesc replacing him, because in their mind, we needed a player exactly like him, couldn’t get the idea that Cesc is different. Saw it Henry and people not understand how Adebayor could replace him as a 30-goal scorer (scumbag that he was); expecting him to play like Henry did. Basically, we don’t need a like-for-like Ramsey replacement, we can do… Read more »

Tungor_Adams
Reply to  My Cousin Vinai

Not so sure most fans do, do you? The challenge is more to have faith in someone not yet as proven as the player we lost, which if we look beyond the replacement of Vieria have not been so successful at, which is why our star players & captains have left us 1 by 1 over the past 12 years. I think they left AW with great respect , but also without any doubts that the promises of glory around the corner was an illusional dream that AW and club did not have the recepie to make reality. Personally I… Read more »

If Willock can charge forward and provide assist more, I don’t mind he starts ahead of Guendouzi

Yeah I think your right, I think gendousi is a good player but I think he’s very limited

I think what u think too

Fucking Henderson won the Champions League! I always said that they would never win a trophy with Henderson in the side.. How wrong I was!
My point? Not really sure – but we don’t need 3 world-class centermids to do well!
Sorry for using the term centermids, it reminds me of the Human Centipede movies! Which is turning me off and driving me crazy… Much like our summer window so far 🙁

You know I’d put the human centipede above our transfer business so far this summer. At least those guys executed their vision, as much as we wish they hadn’t.

Guendozi stalled during latter parts of last year, but I doubt few among us where unhappy with what that young lad displayed early on. Hopefully a breather this summer will help him find his game and take that next step, the experience of what PL demands is already in his backbone

Willock and Guendouzi would be a better combination as both can run and tackle. The problems have been since Xhaka’s arrival we need to play to have a runner and a tackler to make up for having him in the side. He is just a waste of space

Good ebening…i got a big motivation to read comments relating to this articles and expecting a big performance from each individual posting their opinion…don’t worry about me, I’m going to give a big help by giving my humble ideas on the issue on ground….Good ebening once again..thank you.

Such an exciting prospect who really flew under the radar for me until last season.

(As in I hadn’t been paying attention, not that he’d done poorly).

Would love to see him get game time in the league this season. An homegrown lad running our midfield would be a real joy.

In other words, no cm signing? I dont mind giving him a chance, but can we sell xhaka and get a replacement?

Ceballos is potentially a CM, isn’t he?

More of an attacking midfielder and winger, than as part of a two in midfield. He would be good as one of two 8’s in a midfield three.

I doubt Emery would sell Xhaka. There is something Emery(and Wenger) sees in Xhaka that maybe we don’t notice. There were times when Arsenal didn’t play with him and even with Ramsey Arsenal struggle with to get a foothold in the midfield. With Xhaka, Guendouzi and Torreira Emery is happy with CM/CDM option and if Joe Willock shines then he is in contention. Ramsey barely played CM last season and he only shone in European games. For Arsenal at CB should be the top most priority for transfers. And LB and RB cover will be good. Winger is pretty much… Read more »

Xhaka is screwing up Arsenal football club,, he is a Tottenham sleeper cell

Emery must be tempted to play with his big willy…gets coat and leaves!

I think the name Big Willy is reserved for Saliba. Kid’s an absolute unit.

Hopefully he’ll impress this Summertime enough to earn himself a place in the first team. I just hope his disciplinary record is good – it won’t do his Arsenal career any good to be in trouble with the Men in Black.

Nice pun on Will Smith in the headline.

Good news, let’s hope he gets suitable chances to shine in the coming season.

Bayern Munich are currently in the process of recruiting as much young, quality talent as they can from around Europe.

After his “eye-catching performance” against them the other day, I wouldn’t be at all surprised if they have now put Joe Willock on their “one to watch and monitor” list.

Willock was the stand out youth player for me last season, I’d like to see him feature a lot more this year

He’s been under the radar a bit which is a good thing.

We’ve yet to see Smith-Rowe as well this pre-season. Likely Emille will have a function higher up the pitch if he isn’t sent out on loan.

Was very impress with uncle Joe. I think he can truly step up into the breach in midfield and play a role for the first team. Plenty of energy and endeavor, he looks to have taken inspiration from young GUendouzi. Also a lot more strength to him now. Certainly a better option than Elneny off the bench and frankly more technical going forward. Also another positive if he is used is IF we get Cebellos, we can use the Spaniard higher up the pitch (in which case we have Ozil, Cebellos AND Smith-Rowe) I’m struggling to see useful function for… Read more »

We have not functioned well with Ramsey in midfield? More the opposite, look at our results after his injury, we lost an engine when he got sidelined, and while willock is not Ramsey he also has a natural drive to penetrate defenses, maybe with more technique but less flair yet very much the similar lvl of talent. I liked what I saw from him last year, he oozes determination, self belief and feet on the ground mentality, all key to make it on senior lvl

I’m impressed with him too, I really am. This could all be the beginning of a fantastic home grown core. It’s really the way to go.