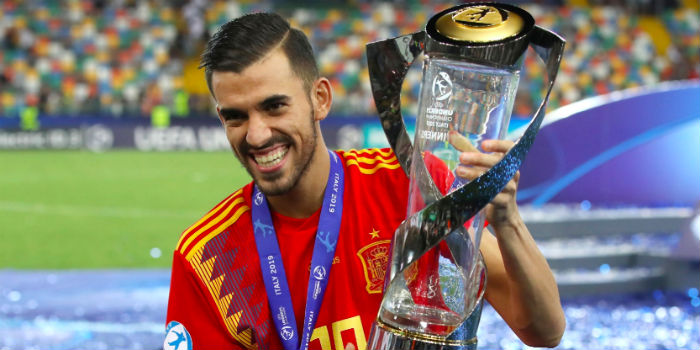 As numerous sources in France and Spain have been saying for the best part of a week, Arsenal are on the cusp of completing a permanent deal for Saint-Étienne’s William Saliba and the season-long loan of Dani Ceballos from Real Madrid.

We’ve covered the details before. Here. And here.

In case you missed them.

Saliba. 18. Centre-back. €30 million deal. 5-year contract. Will spend next season back on loan at his current club.

Ceballos. 22. Central midfielder. One year loan. No option to buy.

They are expected to take their respective medicals in the coming days.

Obviously, we’re pleased to see us signing players, but that doesn’t stop us from having a serious case of transfer window fatigue.

Just as we advocate for our young stars to go out and experience we are at the receiving end of it, ??? I cry and laugh at the same time because that’s how it feels to taste your medicine. I pray these guys at the top knows like really knows what they are doing.

Best news in a dreadful exam week.. thank you Arsenal, tho still to be confirmed which will hopefully happens one of these days

I am Gooner
Reply to  Pakgooner

Do we start paying for Saliba next season?

And Everton and a CB…

Why couldn’t we buy Saliba, and throw in Kos as part of the deal?
We can get Saliba in straight away and they get an experienced CB so they’re no short in that position

Either way, good news for Arsenal

yen
Reply to  Maxin In The Shade

Well St. Etienne simply might not be interested in a 34 yo CB with a wiggly achilles and potentially zero resale value

And a 34 yo CB may not be interested in St. Etienne. A lot of moving pieces with a transfer. It’s not as easy as FIFA 19 makes it out to be.

gunnerdactyl
Reply to  Maxin In The Shade

Why would St Etienne accept a player they’ve never shown interest in as part of any deal?

What’s with all these stupid obvious questions that keeps circling around in our fanbase this summer, why wouldn’t they accept Kos, why aren’t we selling Mustafi, etc. It’s obviously cause they’re not wanted by the other club or they’re just plain shit. We know they’re shit, do you think the other clubs are blind?

Really one of the worst parts of summer.

I agree. Getting sick of the “Why haven’t we sold Mustafi yet” business. It takes two, nay, three to tango. Arsenal need to agree a fee with a club who is willing to pay said fee, and then Mustafi has to agree personal terms on top of all that, which might include a wage reduction. It becomes obvious why he is still in the squad.

Can we please have Gareth Bale instead of Ceballos?

Not on 600K/week wages. At half that rate worth a punt. There’s other business to be done still namely defensive reinforcements. Tierney can play in the center but our squad’s only fit recognized right back is not looking up to the pace.

Bale is shit,,, he’s one player who thinks he’s better than he really is, overrated monkey looking scum twat,

southpaw74, that’s way over the line. we’re better than that.

How do you go play for Real Madrid and never bother to learn Spanish? He never socialized with teammates. Never did any community work. Bale is a horrible mercenary. Disgusting. Let Man Utd buy him.

Love this but we need a centre back in who can help us this year too. Upamecano would be my choice. Let our young players take on the winger position and spend that money on a centre half.

Upamecano, Denayer (homegrown by City), Tah, Konaté…
Many options that can help us this season and are still young. Would be a great business (and in the Tah situation I believe we can throw Mustafi)

Honestly don’t see the benefit of ceballos unless we have an option to buy, why should we give other clubs players match experience when he have a bunch of youngsters also needing games to either develop and/or increase market value

The benefit of Ceballos is …he is genuine top class talent, and will improve our midfield for the coming campaign. This is not (for us at least) about his future development. We have a Ramsey shaped hole and this guy can fill it. Our kids are great, but they are not ready to take on that responsibility every week.

Benefit is, we need to make the Champions League.

That’s not technically a benefit (until we do with his help), but there you go.

Sorry, but don’t see the point of Ceballos if there’s no option to buy. What was the point of Emery allegedly speaking personally to the player and selling him the Arsenal vision if he’s going to be gone next year. Irrespective of the fact that we need to fill Ramsey’s role in the squad, we’re literally just going to be helping Real Madrid increase the value of their player with no real upside for us. I thought we were planning for the future, and getting players on one year loans with no option to buy is certainly not that. Disappointing… Read more »

I’d rather take a chance on our own youngsters to be honest. If these statements of 40 matches are true, then it’s going to be more damaging to the team in the long run. You can’t just build a team with a player like that in your core, learn how to play with them and develop an understanding of their football, only for them to be ripped out and us having to fill that hole with yet another unknown quantity. If this was a loan for a squad player who would maybe chip in every now and again, then fine,… Read more »

Basically loan Ceballos and no Saliba this year, and next year Ceballos will leave and Saliba will join. Weird weird transfers

1) We need immediate impact. He’s going to be rented back out

2) he’s only ‘impressed’ over 16 games. Far more convincing players in Upamecano and Kayote at RB Liepzig both who have been proven over 40-60 games.

3) His price at a whopping 29m, should he fail to deliver will mean a massive loss NOT to mention difficulty moving him on.

Particularly with Tierney (thankfully) called off, and Koscielny (rightly) making way, it makes far more sense for us to bring in a more established and proven player.

Cebellos. He looks interesting. We need to concentrate resources into two critical positions in need of reinforcement at Cback and winger. We don’t want to be dissipating effort and money into too many other positions. Thereby a loan makes sense. Cebellos looks versatile. Willock is threatening to perform good function for us in the deep midfield (Better option than elneny anyways) so we don’t entirely need Cebellos to cover there but he can and does have a box to box ability much like Ramsey. He also has function for us higher up at AM in lieu of Ozil and should… Read more »

A centre back and a lethal winger and we’ll giid to go!

Honestly some of you lot are a fickle bunch. Cabellos is class. Without throwing out cliché phases, he’s a younger version of Isco. Madrid know that. So do we. He helps put us back in the Champions league. When we have the ability to offer that again, we’ll have a much bigger pool of players to pick from. Not only that- we have the financial clout to pay for them too. Is he a stop gap? Maybe. Probably. Could we buy him next year for $50 mil once we are back in Europe’s elite? Absolutely. Willock and Matteo are 20.… Read more »

Once Cabbelos has had a taste of first team football and the glory that is the Emirates, he won’t want to go back to sit on the bench in Madrid. So the lack of option to buy doesn’t necessarily mean we can’t, probably just means if he does well, Madrid can charge us more. He looks a little light weight for the Premier league but hopefully he’s another Santi.

I thought Saliba’s offer was upped to €40m after levy started meddling in?

My understanding is that the player had his heart set on an Arsenal move and it would have just complicated matters for everyone to have started fiddling about with terms and other offers at the (literal) last minute. Good try by Spu*rs at messing things up, but they have plenty of cash to spend and seem to be after several other players anyway.

My understanding is that the player had his heart set on an Arsenal move and it would have just complicated matters for everyone to have started fiddling about with terms and other offers at the (literal) last minute. It’s a shame we haven’t got him straightaway, but we needed to stretch out the repayments.

Would have also been nice to look at a 2 or 3yr loan for Dani if there’s no purchase option.

Thank you, thank you. Pray for two things no 5 or 6 nil drubbings by City and Liverpool and top 4. Just wanna see competitive fighting football that’s it!

If you don’t want any more drubbings by City or Liverpool then we need to strengthen the defence and give Xhaka a brain transplant.

Do not be fooled.

We are paying 5m for Saliba which will have an impact considering the size of our current budget this summer and may dictate whether we should forgo on quality (or a Cback altogether) for Immediate needs in coming season.

We will pay upwards of 38m for Saliba eventually.

Cebellos is 4m for the loan. It is unclear if we have an option to buy.

https://www.forbes.com/sites/bobbymcmahon/2019/07/25/what-you-need-to-know-about-arsenals-new-signings-dani-ceballos-and-william-saliba/#36ee46bd26d0 5m for Saliba has immediate impact on our small transfer budget and may dictate if we skimp on quality or a Cback altogether to make things fit. Eventual cost of Saliba (a relatively unproven player with 19 games mazx under his belt) is 38m which is a massive gamble for a young hopeful. We’ve seen the likes of Mvilla touted as the next big thing. If he fails to live up to promise, its a huge cost not to mention he will be slightly more difficult to be rid of than Jenkinson or Elneny. Cost on loan for Cebellos… Read more »