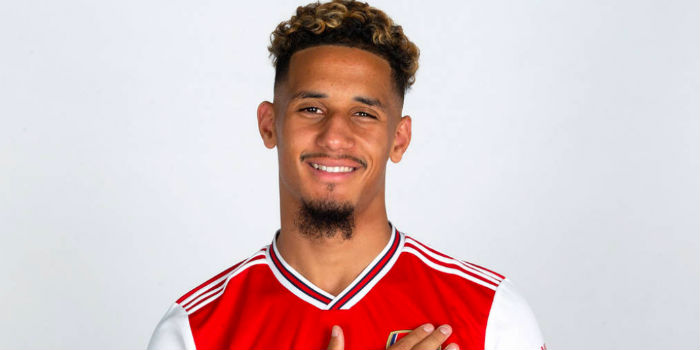 Arsenal have confirmed the signing of William Saliba from Saint-Étienne and that the 18-year-old will be loaned back to the Ligue 1 side for the season ahead.

The Gunners have been trying to sign the France under-20 international all summer and are thought to have agreed a package worth nearly €30 million.

Speaking about the deal, Unai Emery said: “We’re delighted William is joining us. Many teams wanted him but he decided he wanted to come to us and be part of our future.

“He will stay in France next season for more experience and then we look forward to him joining our group.”

Saliba is currently sidelined by a groin injury that he picked up at the tail-end of last season but that hasn’t hindered his medical.

Saint-Étienne kick-off the new season away at Dijon on 10th August, no doubt Gooners will be paying extra attention to their matches this season as our new boy looks to burnish his reputation.

Well that is good news for the future. Let’s hope he has an excellent season in France and joins up with us as a more polished and experienced player.

This guy is the defensive Kylian Mbappe, believe me.
You are worth waiting a season for.
May your days in Arsenal be long a trophy laden.
Welcome.

You wait for a London bus, and then …

Before you get off the bus, you might hear Zaha was signed. Sanllehi and Edu on fire.

Sanlehhi and Edu on fire?
What a joke that is….

You find out you have to wait for another year?

Zaha another waste of money.

55m (plus we have to send Nelson on loan)

Ziyech (according to Overmars)offered to us for 22m. Fekir 24m-30m

Sanlehi doesn’t know what he is doing.

If ziyech is such a bargain why hasn’t any other clubs come in on him?

Fekir is a good player no doubt but he ended up in betis for a reason.

Can you please stop repeating yourself in every single post. We all know your position. Obsessive repetition of the same opinion doesn’t increase its merit.
Don’t you ask yourself why Ziyech and Fekir were not snapped up by the super clubs?

Good Ebening.. Fuckin spurs put back in their place once again. Both players joined us. Fuck Levy

Guess today is buy one get one free day. Welcome son. Hope ur wish to pair up with Holding to become legends come to pass

he also chose us over CL runners up s***s

I am now optimist about our defence in the future. Holding, Saliba, Mavro, Chambers and experienced and more cautious Papas. Hope Emery will keep our little polish gem too. Life is good until first defeat.

Cautious & Sokratis will never be used in the same sentence unless they misspell it at put an N at the end instead of US.

Good stuff. Can’t expect too much from him, which is difficult given his price tag. Even when he joins next season he’ll be only 19 so he has a long road ahead. An extra year’s first team football will do him good but he looks like a unit already! Glad this is over the line and we can move on with other targets… maybe….

De Ligt, Upamecano and Koyate have played A LOT of matches for first team at high level.

No, it’s not such a big difference. De Ligt is a super talent who’s been playing in Holland where you can blood players even younger than you can in France. When Dayot Upamecano was 19 (last year) he started 25 games for Leipzig (he missed a lot of this season with a long-term injury). And so his back-up Ibrahima Konate had 27 starts at 19 this season and only turned 20 in May. When Dayot was 18 though, he only had 8 starts, and last year when Konate was 18 he had 14 starts. William Saliba is about 2 years… Read more »

He will be 18 until his 19th birthday (at least that’s how I think it works).
Let’s see how many starts he gets until that point. I’d be very happy if he can develop as well as Upamecano (I definitely believe he has the potential, and so too seemingly does our recruitment team).

Good luck this year William, and we look forward to seeing you in Arsenal colours next year!

A wise man once said:

New signings are like buses, you wait ages for one, and then two-three come along at once.

He said in his interview when they asked him why he’s going back to St. Etienne for another season, and he replied:

I love this kid already. He’s talking about psychological and physical maturity, not just ability. just wish more of our fans understood this before they insist we throw academy players into the first team ahead of experienced pros.

Given that the team is seriously worse than last year and top4 is a distant dream I would rather give XP to juniors instead of just observing seniors lowering the transfer values.

I disagree with your analysis because the standard of the top 6 increased massively this year with 4 of us making the CL & EL Finals. We did improve – but we were held back by costly individual errors and injuries.

If you want to know what 1st team football would’ve been like for 18yr old Willock and 17yr old Saka, just remember the rough patches and criticism Torreira, Guendouzi, AMN and Iwobi went through this year, and those guys are 3-4 yrs older.

That is proper good news! Welcome Will!

Like buses, you wait for one transfer to come along then there are two!

At least one of these buses looks like it could be a sports car. The other is completely useless and going away to back where it came from , not where we need to be going.

So they pay 30milion euros on this chap to loan him back, but 30million is too much for a 22 year old wing back who would start playing straight away????

Can’t agree with you more.

That would have been another stupid decision. Signings are not good just for the sake of them. You need to look at the deeper implications. And understand whats really going on. 1) We have immediate need to sort out Cback. We already have 2 young cback hopefuls (Mavro and BIelik). Nor is Saliba’s statistics that scintillating when you consider he has ONLY featured 16-19 matches max. 2) Tierney would have distracted money away from Cback and winger signings or at least have impact to the money we should be committing to bring in quality. We don’t need to be worrying… Read more »

Andre Santos. Except he wasn’t that good.

‘Salibating’ at the prospect of this kid leading our defence for years too come. You just got a feeling, he’s gonna be special. Its always nice to get one over the Spuds (Ceballos). But to get two (Ceballos & Saliba), and that too in a single day !! Well you couldn’t ask for a better day as a Gooner !

Like anything would hinder the Arsenal in a medical! Great to get a real talent and well done to the club. Can’t wait for Saliba to get going with us!

A signing every hour today, well played arsenal, going to be an exciting evening 😀

bdotm
Reply to  The Spoon

Don’t understand this signing whatsoever. Hopefully he proves good. BUT : 1) We have limited budget and even in installments, it has impact to our other dealings. 2) This does not have ANY impact on our urgent needs in central defense. 3) Its expensive eventually. Should he not work out, we will face a massive loss not to mention he will be difficult to move on and with potential impact to other transfer windows down the line. 4) We already have young Cbacks in Bielik and Mavropanos developing. Why the need for one more? 5) He has only played 16-19… Read more »

My best mate’s daughter was born today. Years from now I’ll be telling her all about how on her fateful birthday we signed ceballos who we’d have for only a year and saliba who we’d get after one year. How one helped us get back in the UCL and the other one won it.

Helps clears things up a bit.

Again some people out there on the net believe we aren’t paying anything for Saliba.

Eventually we will pay up to 38m for him!

We are forking out 5m for him this season as we speak to be a non feature. Whilst it seems a paltry sum, remember this could be the difference between signing Tierney or not or perhaps going for an Everton Soares or a lesser player.

Considering the limits of our current budget, 5m will have an impact.

Same amount we recieve if Bennacer moves to Milan