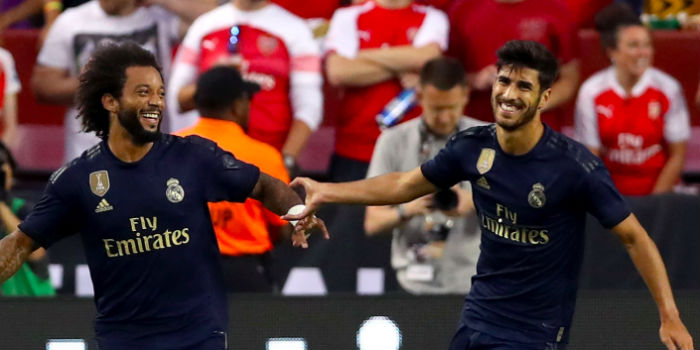 Unai Emery says he’s not sure whether a knee injury sustained by Marco Asensio during Real Madrid’s penalty win over Arsenal could affect the status of Dani Ceballos’ proposed loan move to Arsenal.

Asensio had to be stretchered off towards the end of the first half after an innocuous coming together with Pierre-Emerick Aubameyang and after the game Zidane confirmed it looked bad for his attacking midfielder.

“He went straight to the hospital to do tests. We are worried and touched because it looks bad.”

Ceballos is reported to have agreed personal terms with Arsenal and the Gunners did have an agreement in place to take the Spain under-21 on loan without an option to buy.

It now remains to be seen whether Florentino Perez sanctions the move.

Asked about the situation in his post-match press conference, Emery said, “I don’t know [if it affects the deal].

“Our target also was not to take injuries in that match, and they maybe have with Asensio.

“It [could be] bad news, for them and also for us. I don’t know if it can change something.”

Obviously, we send our best wishes for a speedy recovery to Asensio, who’d earlier scored and hit the post. It’s going to be a nervous few hours for Raul and Edu as they try and delicately get this over the line.

Arteta: I’ll find out where training ground leaks are coming from

Do we have a plan B? Or we just do the Arsenal way and loan for Asensio since he is injured?

Ho, ho, ho. Actually, I assumed that the Ceballos loan was Plan B, as we couldn’t afford the Plan A option – to get a midfielder on a permanent move.

Buy a sub-standard player and pay him overinflated wages until he runs out his contract because we won’t be able to sell him?

I thought that was Plan A.
But then we’re going in circles.

I hear the name Mustafi in the background, or is it my imagination?

They all give up and pick flowers in the park.

Jack but
Reply to  Imustafiyou

Dont they have a whole warehouse full of classy and underplayed midfielders?

Cant they just take one down from a cyrogenised pod unplug his matrix cable spray paint synthetic ivory coloured quick dry jersey paint, slap his arse and point towards the burebeau?

can we just keep this one for a while

Hypothetically speaking, we loan this guy and he has an amazing season. Without an option to buy, won’t we just be priced out?

It Is What It Is
Reply to  SizC

Does it matter? Our youth will be a year older, stronger and wiser hopefully.

Fart Overjars
Reply to  It Is What It Is

I think a loan at this stage seem sensible?

Wow my use of punctuation is; at times disgraceful.

For goodness sake. Why couldn’t Emery, Raul and the Kroenkes tell the players to go softly and not make physical contact to minimise anything like this happening? It’s just typical of our lack of planning and foresight

You didn’t watch the game I take it? It was nothing contact.

If you watch the slow replay it wasn’t contact at fault. It was the way his foot went down and his studs planted into the turf. The kind of thing that is typically at fault for a ligament or meniscus.

The turf at that field is infamous for players getting injured playing on it.

It would be just like us to fuck ourselves over. Losing out on Zaha because Palace beat us then losing out on Ceballos because we injured the guy ahead of him.

Try to not be so negative. Asensio is in direct Competition with Bale. Also Cellabos doesn’t want to play under Zidane. He is coming.

I hope he is but I wouldn’t be so sure about what Ceballos wants. Usually reliable sources in Spain indicate that both Real Madrid (presumably Zidane, if not Perez, who has all the power there anyway) and the player want a return to Spain at the end of the loan period – which is why there is no buy out clause. If he arrives here, it will still be for the season only.

Why does everyone want Ceballos to be a permanent signing. I think this stop gap loan deal works great for all considering we have willock, Smith-Rowe waiting where this season could be a tad early and I think the loan move is perfect for their development as well. We do not know if Ceballos would fit in with the premier league(I am sure he can) but berating a loan move to a club in the stage of transition we are in and the attractability we offer, that’s the best we can hope for. I love what I have seen of… Read more »

Now they have reason to buy Pogba!

that’s Arsenal for you. Same old story year in year out.
I don’t understand why we pick repeating the same mistakes in the transfer market.

Wining pre-season matches but comes EPL it’s same old story average team.
wrong selection of players. The problem we had last season was the defense Mustafi to be specific but here we are no rumours for in comers

We lost out on Zaha because we simply couldn’t afford the terms that Palace were insisting upon. Ceballos always was a stop-gap option as there was no option to buy at the end of the loan period. What we’re left with now is a handful of nothing really. Presumably, there’s another name on the “possible transfers” list but time is running out and we could well be bounced into bringing someone (anyone?) in because of it. I hope not, but the management have talked up inward transfers so much recently.

How things change so quickly. Just when it looked like we had done a good piece of business (especially when it didn’t involve a +£1 strategy), the familiar injury God strikes again!

A very spursy thing to happen to us.

I fail to see how this could suddenly make us a bunch of repellant cunts.

Asensio is a wide player. Real have plenty of those (hazard, vinicius, rodrygo, vazquez, isco). Ceballos is a CM. Why would this affect the deal?

May Real keep Ceballos and we give chances to Joe!

Why people are so excited by a loaned player? Small, short term thinking mentality is running through fans as well.

It’s Arsenal’s reality at the moment. Most fans recognise that you can’t spend money you haven’t got.

Sure. Iwobi is only one year older and has played a bolder for a Senior Nigerian team in that 8/10 position. I am not keen for an unproven loanee to take the space of someone who could flourish there ( Iwobi, Rowe smith, Willock, Guendouzi). Bu it is just my unpopular view.

Iwobi doesn’t play as a #8 and has rarely as a #10 for us.
In a nutshell: You wouldn’t sub Iwobi in for Ramsey. Ceballos you would.

Because he might just help us get that 4th spot

Probs because we need a post-Rambo plaster to tide us over until Joe etc are ready for the full time gig. Think buying Ceb would be worse as he’d block the youth long term who are so exciting, but they need a season to be broken in with less pressure.

Exactly my point but it applies now.

We can’t never be actually happy when Kroenke is still there.

But for now we’re happy because Ceballos is actually a top player. He is a good replacement for Santi Cazorla.

Friendlies give me the squits

Use Iwobi at CM, buy Everton and plug in the wings. The youngsters like saka, Nelson can back up the wings.

Haha, that’s because Jenks actually made him defend.
Loved that wry smile he gave Marcelo after the Brazilian said something to him.

Maybe we can loan them Ozil. They might actually go for it.

I thought Sokratis deliberately got himself sent off so we could restore parity and they won’t be humiliated thereby jeopardising our Cebellos deal….:D Poor Arsensio. Feel for him. Hopefully there is no impact to Cebellos. They do have a lot of assets in the attacking side of things – Lucas Vasquez, Hazard, Mariano, Vinicius Jr, Brahim Diaz, to name a few. As a back up, I mentioned potentially keeping an eye on two older players at Juventus – Khedira or Matuidi. Both will be excess with Ramsey and Rabiot coming in (for free) All the more reason for us NOT… Read more »