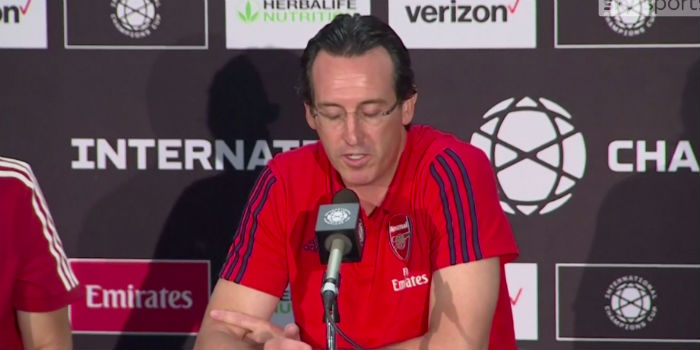 Unai Emery doesn’t expect Laurent Koscielny to be part of his plans this season but says he’s leaving a final decision on the Frenchman’s Arsenal future to the people above him.

The Spaniard says he has respect for the Frenchman although it seems pretty obvious he’s seething inside about the way his captain has behaved.

Koscielny informed the club that he would not travel on the pre-season tour of the US because he wants to leave the Emirates despite being under contract for another year.

“I’ve spoken about him, with respect to him,” said Emery after Arsenal’s penalty shootout defeat to Real Madrid in Washington DC.

“I tried to be with us in the position here and continue working and finding one solution between the club, between him and us.

“When he decided not to come here with us on tour, the solution is now only for the club and him.

“Now it’s one issue only for the club and him. My idea is to continue with the players we are working with, and the players that want to be here.”

Ligue 1 sides Rennes and Bordeaux are said to be interested in signing Koscielny although both have denied having an agreement with the 33-year-old and neither want to pay Arsenal’s £10 million asking price.

I really wonder – and No, I am not being sarcastic – what the chances are of us winding up with a financial profit from this transfer window ?

Because we’re running one as it is. Tierney deal appears dead ; Cebalos doubtful ; and a host of other stuff is hot air and we have 15 days left and nothing much looks likely.

Perhaps they’ll give us another corporate pep talk instead ?

The men at our helm have their professional resumes to not let down. They’re not playing

Possible, but given all the talk by management so far it would be highly embarrassing if that was the outcome on 8 August. What worries me is that we’ll be bounced into making purchases by the pressure of “something must be done”, or more accurately, “someone must be bought”, as time runs out.

Would this be a problem? If we get into the CL for the season after, after blooding the youngsters and keeping our powder dry for next summer, maybe that’s actually the sensible path to take. We’ve wasted so much money on average players, loans and youth promotion may work out better.

Got to get top 4 though…

“Would this be a problem? ” – Well it depends if you think that shipping another 50 plus goals in the course of the forthcoming campaign would be a problem ?

It’s all a matter of taste, I suppose.

We won’t be anywhere near top 4 without reinforcements.

I disagree as we were one point off top four with our current bunch of merry men. Admittedly we will need some of the big guns to step up and failing that the youngsters have looked very lively.

That’s a phenomenally huge “if”…

I think, given our current circumstances, it’s more important to focus on trying everything to fix the problems now, not hope for the best in a season or two.

You’re right about a top four finish. We’re losing money hand over fist out of the CL – between £25-35 million a season – and will find it increasingly difficult to attract interest from top quality players (let alone afford them) as long as we are.

To be fair, we haven’t heard anything real about the Ceballos deal being affected by Asencio. All we really have is Emery saying “I don’t know” at a press conference, and Sky claiming he’s here for medical.

If are counting to do our business on deadline day then other European clubs won’t be desperate to sell as their window will still be open. Not a very strong position to be IMO..

I knew we had some ego’s in our team but never expected this from Kos. Laters pal. Enjoy mid table obscurity in a league no one cares about.

Last line sounds like a set up for an Arsenal joke.

Do you think we are trying to use Kos in a deal for Rennes’s Sarr or Bensebaini?

I am ordering my Koscielny shirt before he leaves. He gave us the best years of his footballing life. He’s also the only other competent centre back in an Arsenal shirt that I have seen apart from Toure and Mertesacker. We all make mistakes. I hope this doesn’t tarnish his legacy too much.

He also gave us one season and half of errors and red cards.

The last two 5-1s, he was unjustly red carded in one and injured early in the other. Putting the two matches together, in the 75 minutes he played we won 2-1, and the 105 minutes we were without him we lost 9-1.

If you say so, I don’t remember it like that and it’s typical late Wenger excuses/what if/if only nonsense. He played in far too may of those results for him not to be culpable.

“He gave us the best years of his footballing life”

I am not gonna say he was paid handsomely for it but TBF, it’s not like Europe’s elite were always on the door, going all out for Kos. In fact I don’t remember a single bid from any of the top clubs.. even City, who once treated us like Ebay, never made an enquiry.

He was decent on his day sometimes, even world-class but like our defence, never consistant.

In fairness to him, Bayern did inquire about him some seasons back and every other team knew we were never going to sell him + the player himself was totally committed to the club and wasn’t entertaining any advances!

It is best for all parties that he leaves now, but I choose to remember the positives he brought during a difficult tie for the club.

The most important thing is that the club bring in a fee to change our poor record on putting the club first. It is our money as fans that they are administering.

It should be forbidden to say his name, regarding anything to do with Arsenal.

Kos gave us several good seasons.
I agree he should leave now but I
wish him well in the future.

He’s doing us a favour. If there is any plan at all, it seems like the transfer team want to (yet again) risk next season and skimp on this position. Saliba does not help us in any way (being rented back out) nor is he proven beyond just 16 matches last season. Contrast Upamecano or Koyate both of whom have over 45 matches to their credit (if you want to measure stats over a longer more sustained period) in an extremely frugal Liepzig (just 29 goals all season) Seems to be the idea was to bank on Koscielny as back… Read more »

It struck me as a bit odd when kos made negative comments towards the French NT and particularly deschamps when they won the world cup. But with what’s happening now, it has become clear. This man doesn’t know how to handle his resentment very well.

The more his departure is delayed, the more damage his staying will do. It’s a shame given his overall record of service to the club that it ends this way but, given he is club captain, drawing this out will have a destabilising effect. Put an end to it now, even if we don’t get a fee for him (and we can’t realistically expect much, certainly nowhere near £10 million, at 33).