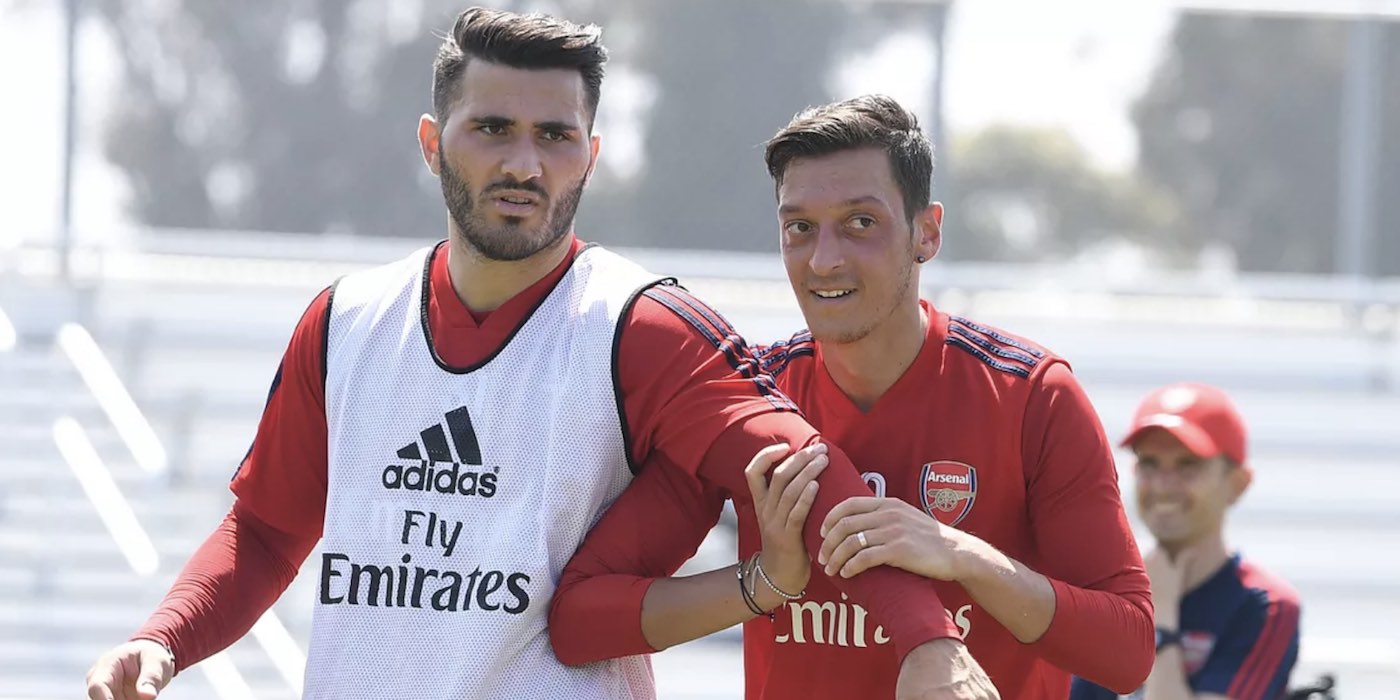 Unai Emery says that the absence of Mesut Ozil and Sead Kolasinac from the Emirates Cup yesterday was down to both players still not being quite right after the frightening incident in which they were involved last week.

The duo were set upon by knife wielding thugs, with the Bosnian seeing off the attackers, but clearly it’s something which had a psychological impact on them.

Speaking after the 2-1 defeat to Lyon, the Arsenal boss was quizzed about their non-participation, and revealed he felt they needed more time to recover.

“Every player is very important in the team, but also each moment and some circumstances give us a decision between the player and us,” he said.

“It’s not a good moment to play because their mind is not now 100 per cent. It’s a very personal circumstance and the most important thing now is that they can feel good, they can feel safe, they can feel calm with their family.

“They came this morning but I spoke to them and decided it was best to continue their resting with their families and wait for a few days to hopefully come and start normally with the team.”

Both players are expected to travel to France this week as the Gunners play their penultimate game of pre-season against Angers.

Where their wives with them?

Love the pic. ‘Nobody messes with my little brother!’

Ozil will find any way to not do his job lol. TBF I’d probably try get a few sick days out of it myself, that’s probably the only reason he stuck around for a crime reference number.

Rather unkind in the circumstances, but the record shows that Ozil’s ability to play week in and out is, how can I put it, a tad fragile. On the other hand, Kolasinac doesn’t strike me as the kind of person that would be overly affected by such an incident though.

Strong man, right? Reality is that he can suffer post traumatic from it five years from now. Can wake up from sleep because he saw people trying to stab him.

I think fair enough that these guys are taking a bit of time away from the hyperbole of Premier League football with their families after that ordeal. I know in the social media era everything becomes a meme regardless of context, and to be fair the majority of the content created off the back of the incident has actually been fairly amusing and in good taste. In reality though, these guys and their families are victims of violent crime. Fortunately all parties got away unscathed but things could have been very different. For all his bravery, Kolasinac could have been… Read more »

tbh, you’d probably have fainted in terror but would keep telling the story about how tough you were to anyone unlucky enough to be nearby.

and the Most Compassionate Comment of the Year Award goes to…

Here comes an excuse for Ozil to flop next season. Last term, it was injury.

Your comment is disgusting. This was abviously quite a traumatic experience. Give the guy a break.

Ozil’s actual or perceived reaction to various things that caused him to miss a lot of games last season are in the forefront of fans’ minds after this unfortunate incident. It’s not fair in these particular circumstances but …

Translated: it’s a shit thing to say after a guy was attacked with a knife, but I’m going to say it because I’m on an anonymous blog and therefore freed of shame.

The Ozil apologists are always dreaming up ridiculous excuses for him going missing. Wouldn’t surprise me if we did everything possible to get shot of Mustafi, Kolasinac and Ozil before deadline day. I don’t mind Kolasinac, he’s decent enough, and while Tierney looks extremely injury prone, Our squad is still looking a little bloated. Sanllehi looks a completely different operator than what we’re used too, I can see a squad culling on the horizon. Ozil’s tweet after Rennes away, proved he’s willing to throw Emery under the bus, getting shot of Ozil and his clique should be next on our… Read more »

I’m no Ozil fan but have a heart.
His wife was in that car. She’s probably insured on it too so next time it might just be her. There is plenty about this that would stay with you.

I wish Mesut and Kola the best.
Kola might have just won himself an extra year at Arsenal.
I hope it doesn’t impact Kieran Tierney’s transfer.

Yeah, Tierney probably won’t want to come if he’s told he’d have to “fight for a spot” with Sead.

What a beast kola is, the bloke had a helmet on and he still shat himself when he was swinging at him. Kinda hoping this experience pushes them on to both have a quality season. Horrible thing to happen though, its a shame that this sort of crime happens daily nowadays.

those thugs were amateurs. best not to build up a profile because real psychopaths might line up.

its enough to take them out of the spotlight for this reason whether or not they suffer psychologically from it, and im sure they have.

Kolasinac makes onions cry.
Kolasinac can kill 2 stones with 1 bird.
Death once had a near Kolasinac experience.
Kolasinac plays Russian Roulette with a fully loaded revolver. And wins.
Kolasinac threw a grenade and killed 50 people. Then the grenade exploded.
Kolasinac can strangle you with a cordless phone.

Leno me, I’ll be your friend
Reply to  Richie

Were these originally Chuck Norris memes…? Definitely recognise them… Either way, they’re great! ?

My Cousin Vinai
Reply to  Leno me, I’ll be your friend

I’m so old I remember when the Chuck Norris memes originally began in a small part of the internet as Vin Diesel memes.

He can speak French in Russian

Leno me, I’ll be your friend
Reply to  Bob's Mexican cousin

Looks like Kolasinac has been working on his defending!

Some of these comments…sigh. Good call by Emery. It’s absolutely ok if they’re not ok. Hopefully they are soon!

At 350 grand a week, I think I’d be pretty ready to throw myself into the games for my club.

DIdnt you actually read the article and what Emery said. Both of them came down for the game but the manager himself asked them to take a break and recover fully from the traumatic experience

That has to be the greatest picture with regards to the context of the article.

Don’t mess with Elneny, he may not be that on the field but off the field he is simply electric.

People trying to mess with our players …well good luck, we may lack Cojones apparently but we certainly don’t lack killer instinct (off the pitch anyway)

A few things id like to note, no one knows their reaction in that circumstance…Even in real war the ones that fight might surprise you, the ones that dont and literally die standing still might have been the loud mouths you knew all your life who gave it big. My only added wish was Ozil had reversed and run the man over but as we’ve seen in London protecting yourself or your own home can get you in serious trouble… plus the gang intimidation seems to come to the point a person can come into your house with a weapon… Read more »